The uncrewed Multipurpose Laboratory Module (MLM), named Nauka, the Russian word for “science,” arrived at the International Space Station’s Zvezda service module on the Earth-facing side of the Russian segment at 9:29 a.m. EDT, eight days after lifting off from the Baikonur Cosmodrome in Kazakhstan.

Nauka will serve as a new science facility, docking port, and spacewalk airlock for future operations.

The MLM deployed its solar arrays and navigational antennas as planned. After Nauka completes eight days in free-flight to allow Russian flight controllers to evaluate its systems, the 43-foot long, 23-ton module will automatically link up to the port on the Earth-facing side of the Russian segment of the International Space Station, which will be vacated by the departure of Pirs. Docking is scheduled for 9:25 a.m. Thursday, July 29, with live coverage beginning at 8:30 a.m.

Pirs will vacate the space station attached to the uncrewed ISS Progress 77 spacecraft, which is scheduled to undock at 9:15 a.m. Friday, July 23. Live coverage on NASA Television, the NASA app, and the agency’s website will begin at 8:45 a.m. A few hours later, Progress’ engines will fire in a deorbit maneuver to send the cargo craft and Pirs into a destructive reentry in the Earth’s atmosphere over the Pacific Ocean. Deorbit and reentry will not be covered on NASA TV. 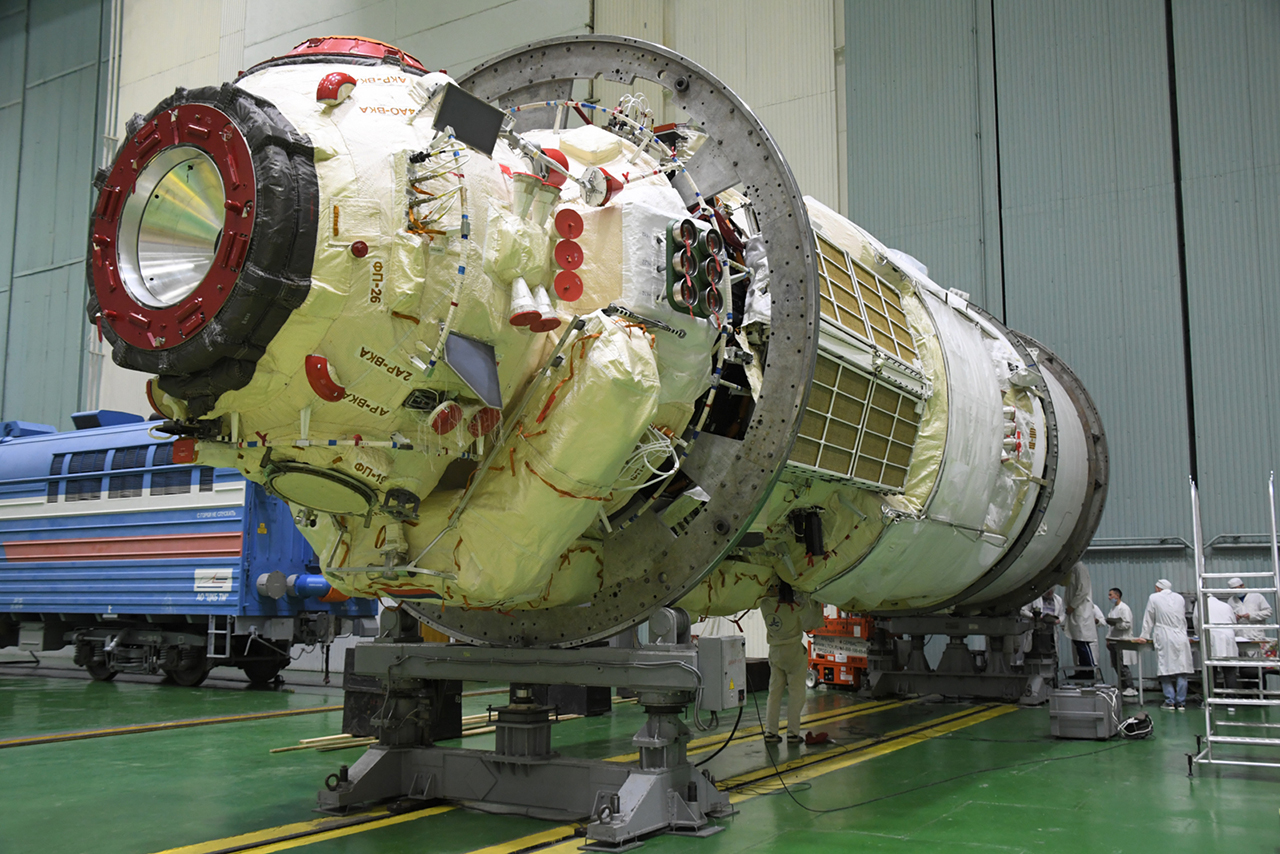 NASA Television, the agency’s website and the NASA app now are providing live coverage of a new Russian science module’s launch and automated docking to the International Space Station.

The uncrewed Multipurpose Laboratory Module (MLM), named Nauka, the Russian word for “science,” is scheduled to launch at 10:58 a.m. EDT (7:58 p.m. Baikonur time) Wednesday, July 21, on a three-stage Proton rocket from the Baikonur Cosmodrome in Kazakhstan.

An international crew of three is  ready for a two-day ride to the International Space Station. The Soyuz rocket that will lift them to space is set to launch tonight from the Baikonur Cosmodrome in Kazakhstan at 12:37 a.m. EDT Wednesday, Sept. 2.

Veteran cosmonaut Sergey Volkov will command the Soyuz TMA-18M spacecraft. Joining him for the trip to the station will be first time flyers Andreas Mogensen from the European Space Agency and Aidyn Aimbetov from Kazcosmos, the National Space Agency of the Republic of Kazakhstan.

On Tuesday, Apr. 28 at 2:45 a.m. EDT, NASA Television will provide live coverage of the launch of a Russian Progress spacecraft carrying more than three tons of food, fuel, and supplies for the Expedition 43 crew aboard the International Space Station.

Launch of ISS Progress 59 from the Baikonur Cosmodrome in Kazakhstan is planned for 3:09 a.m. (1:09 p.m. local time in Baikonur).

Watch the launch live on NASA TV or at https://www.nasa.gov/nasatv

Following a four-orbit, six-hour trip, Progress 59 is scheduled to arrive at the Pirs Docking Compartment of the International Space Station at 9:07 a.m. It will remain docked to the station for about six months.

To join the online conversation about the International Space Station and Progress 59 on Twitter, follow @Space_Station and the hashtag #ISScargo. To learn more about all the ways to connect and collaborate with NASA, visit: https://www.nasa.gov/connect.