The Pressurized Mating Adapter-3 (PMA-3) was robotically removed Sunday from the Tranquility module and attached to the Harmony module after being prepared during a successful spacewalk Friday. A second spacewalk is scheduled for Thursday at 8 a.m. EDT to finalize the PMA-3 cable connections on Harmony.

Download hi-res video of briefing animations depicting the activities of all three spacewalks.

Commander Shane Kimbrough disconnected cables from PMA-3 while still attached to Tranquility during a spacewalk on Friday. That work allowed ground controllers to use the Canadarm2 robotic arm to remotely grapple and remove PMA-3 from Tranquility and attach it to Harmony.

The relocation readies the PMA-3 for the future installation of the new International Docking Adapter-3 (IDA-3) set to be delivered on a future cargo mission. The IDA-3 will accommodate commercial crew vehicle dockings and provide the pressurized interface between the station and the adapter.

Two Expedition 50 astronauts are in final preparations for the first of two power maintenance spacewalks that starts Friday at 7 a.m. EST. Astronauts Shane Kimbrough and Peggy Whitson will stow and replace power gear during the first 6.5 hour spacewalk. The duo will work near the solar arrays on the starboard truss segment.

The two spacewalkers will be assisted by ESA astronaut Thomas Pesquet and cosmonaut Oleg Novitskiy from inside the International Space Station. Pesquet will conduct the second spacewalk Jan. 13 with Kimbrough to wrap up the battery installation work. The majority of the complex power upgrade work was done by controllers on the ground remotely using the Canadarm2 robotic arm and hand.

The three cosmonauts worked on an array of station maintenance tasks and advanced space experiments. Cosmonauts Andrey Borisenko and Sergey Ryzhikov researched how blood flow and respiration is affected by living in space. Novitskiy explored the station’s magnetic field and how it affects navigation.

In a remarkable demonstration of robotic prowess, ground controllers used the Canadian-built “Dextre” Special Purpose Dexterous Manipulator over the weekend to install three new lithium-ion batteries in the International Space Station’s 3A power channel Integrated Electronics Assembly (IEA) pallet on the starboard 4 truss. Dextre also removed four old nickel-hydrogen batteries from the IEA, three of which were stowed on the Japanese H-II Transfer Vehicle’s external pallet to wrap up the first act of a complex procedure to upgrade the station’s power system. A fourth old battery was temporarily stowed on a platform on Dextre.

This clears the way for the first of two spacewalks Friday in which Expedition 50 Commander Shane Kimbrough and Flight Engineer Peggy Whitson of NASA will install three adapter plates in slots on the IEA to which three of the old nickel-hydrogen batteries will be mounted to remain on the ISS but will be dormant. In all, nine nickel-hydrogen batteries will be stowed on the external pallet for disposal when the HTV is deorbited to burn up in the Earth’s atmosphere late this month.

Three additional new lithium-ion batteries flown to the ISS aboard the HTV will be robotically installed in the starboard truss’ 1A power channel Integrated Electronics Assembly between Friday’s spacewalk and a second spacewalk scheduled Jan. 13 for Kimbrough and Flight Engineer Thomas Pesquet of the European Space Agency. Five additional nickel-hydrogen batteries will be removed robotically from the IEA prior to the second spacewalk.

A briefing to preview the two spacewalks and to review all of the robotics work will be broadcast on NASA Television on Wednesday, Jan. 4 at 2 p.m. Eastern time.

Expedition 47 robotic arm operator Tim Kopra of NASA commanded the International Space Station’s Canadarm2 robotic arm to release the Cygnus spacecraft at 9:30 a.m. EDT while the space station was flying above Paraguay. Earlier, ground controllers detached Cygnus from the station and maneuvered it into place for its departure.

After Cygnus is a safe distance away, ground controllers at Glenn Research Center in Cleveland, Ohio will initiate the sequence for Saffire-1, and controllers at Orbital ATK in Dulles, Virginia, will activate the experiment.  Cygnus will continue to orbit Earth for up to eight days as it transmits hi-resolution imagery and data from the Saffire experiment. Following complete data transmission, the Cygnus spacecraft will complete its destructive entry into the Earth’s atmosphere on June 22. NASA TV will not provide a live broadcast of the Saffire experiment or the Cygnus deorbit burn and re-entry, but imagery from Saffire will be posted on NASA.gov as it becomes available.

For more information about the International Space Station, visit: https://www.nasa.gov/station

BEAM’s hatches have been closed completing crew operations for the month. Meanwhile, a pair of spaceships is also being packed for departure this month.

Orbital ATK’s Cygnus space freighter is due to be released from the Unity module June 14 having arrived March 26. The Canadarm2 will grapple and release Cygnus into space where it will remain in orbit for tests until June 22. Three Expedition 47 crew members are counting down to their departure June 18. They are packing the Soyuz TMA-19M spacecraft that will return them to Earth after 186 days in space.

The International Space Station raised its orbit again today as three crew members prepare for a March 1 landing while another trio gets ready for a March 18 launch. Meanwhile, advanced research continued inside the orbital laboratory to improve life on Earth and for future space residents.

Today’s orbital reboost places the station at the correct altitude for the March 1 undocking of Soyuz Commander Sergey Volkov and One-Year crew members Scott Kelly and Mikhail Kornienko. Their undocking will leave the Poisk module’s docking port vacant where a trio of Expedition 47 crew members will dock two-and-a-half weeks later inside the Soyuz TMA-20M spacecraft.

Today, the Expedition 46 crew participated in a variety of human research exploring how the heart adapts to life in space, the risk of atherosclerosis in astronauts and how microgravity affects an astronaut’s vision. The crew also sampled the station’s air and surfaces for microbes to learn how to prevent contamination in future spacecraft.

Another spacecraft is being prepared for departure Friday morning when it will be released from the grips of the 57.7 foot long Canadarm2 robotic arm. The Orbital ATK Cygnus cargo craft is being loaded with trash before NASA astronauts Kelly and Tim Kopra release Cygnus using the robotics controls inside the seven-window cupola. NASA Television will cover the activities live Friday beginning at 7 a.m. EST. 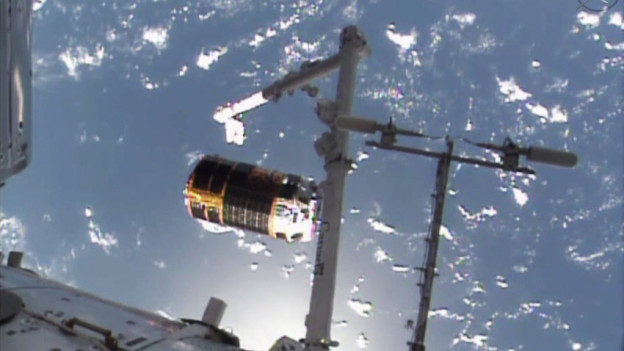 Following a slight delay, Expedition 45 Flight Engineer Kimiya Yui of JAXA, backed up by NASA Flight Engineer Kjell Lindgren, commanded the station’s Canadarm2 robotic arm to release JAXA’s H-II Transfer Vehicle (HTV)-5 from the International Space Station at 12:53 p.m. EDT while the spacecraft was flying 256 miles above the Southern Pacific, after it unberthed from the space station at 7:12 a.m. EDT.

The HTV-5 will now move away from the orbiting laboratory to a safe location where it will fire its engines to begin a controlled deorbit to reenter Earth’s atmosphere. The intense heat of reentry will cause the vehicle to burn up over the Pacific Ocean.

HTV-5 carried a variety of experiments and supplies to the space station, including the NanoRacks External Payload Platform, which can house multiple investigations in the open-space environment of the station, and the CALorimetric Electron Telescope investigation, an astrophysics mission that measures high energy particles to search for dark matter and the origin of cosmic rays.

HTV-5 also delivered materials to support the Twins Study, a compilation of 10 investigations designed to gain broader insights into the subtle effects of and changes that occur in the environment of space as compared to that of Earth by studying two individuals who have the same genetics, but are in different environments. NASA astronaut Scott Kelly is participating from the space station while his identical twin Mark Kelly, a retired astronaut, is participating on Earth. The study includes a suite of integrated human space physiology and cellular-level experiments.

For more information about the International Space Station, visit: www.nasa.gov/station.

The three residents aboard the International Space Station conducted advanced microgravity science and trained for the arrival of the seventh SpaceX Dragon mission scheduled for the end of the month.

One-Year crew members Scott Kelly and Mikhail Kornienko partnered up for the Fine Motor Skills study, part of a suite of yearlong studies planned for the pair. That experiment explores how astronauts operate and repair interactive, touch-based and sensitive technologies in space. Kornienko later studied the possibility of using 3-D manuals, or virtual manuals, to improve training techniques on science hardware.

Kelly joined Commander Gennady Padalka in the afternoon for rendezvous training as they prepare for the next SpaceX Dragon launch scheduled for June 26. The duo will be in the cupola monitoring Dragon and waiting to capture it with the Canadarm2 when it arrives June 29.

The Permanent Multipurpose Module (PMM) was successfully relocated from the Unity module to the Tranquility module at 9:08 a.m. EDT Wednesday.

The PMM was robotically relocated from the Earth-facing port of the Unity module on the International Space Station to the forward port of the Tranquility module in the next step to reconfigure the complex for the future arrival of U.S. commercial crew vehicles. Robotic flight controllers at Mission Control, Houston, working in tandem with the Mobile Servicing System (MSS) Operations Center at the Canadian Space Agency’s headquarters in St. Hubert, Quebec, Canada, used the Canadarm2 robotic arm to maneuver the 11-ton module a short distance to its new location. Expedition 43 Commander Terry Virts and Flight Engineer Scott Kelly of NASA supervised the commanding of the bolting of the PMM to Tranquility. The PMM’s hatch will be reopened tomorrow.

The International Space Station’s Permanent Multipurpose Module (PMM) was detached from a berthing mechanism on the Earth-facing port of the Unity module at 5:50 a.m. EDT by robotics flight controllers at Mission Control, Houston, working in tandem with Canadian Space Agency (CSA) engineers at the robotics support center located at CSA Headquarters in St. Hubert, Quebec, Canada. Used as a supply depot for the orbital laboratory, the 11-ton PMM is being maneuvered to an installation position at the forward port of the Tranquility module through the use of the station’s robotic arm, Canadarm2. NASA Television will provide coverage of the final steps of the installation and provide a replay of pertinent video from the start of the operation beginning at 8 a.m. EDT.

Once it is in the proper position, Expedition 43 Commander Terry Virts and Flight Engineer Scott Kelly of NASA will oversee the module’s final attachment to Tranquility. Virts and Kelly will reopen the hatch to the PMM at its new location tomorrow.

This move will clear the Unity port for its use as a second berthing location for U.S. commercial cargo spacecraft; the Earth-facing port on Harmony is currently used as the home port for U.S. cargo craft. The relocation of the PMM is the next step in the reconfiguration of the station that will allow U.S. commercial crew vehicles to dock to new docking ports on the forward and space-facing side of the Harmony module. That will provide a total of four ports for U.S. vehicles arriving at the orbital outpost.