The hatches were opened today to the new space delivery from Russia’s Progress resupply craft. The Expedition 45 crew also worked on orbital lab maintenance and on science to improve life on Earth and in space.

The Progress 61 space freighter arrived at the International Space Station Thursday evening delivering more than three tons of food, fuel and supplies six hours after its launch from Kazakhstan. The vehicle is docked to the Zvezda service module and ready for two months of cargo transfer activities. Japan’s delivery space ship, the Kounotori HTV-5, finished its five-week stay at the space station Monday morning.

The six station residents were busy throughout the U.S. and Russian segments on a wide variety of activities. Commander Scott Kelly performed high-tech plumbing work as he replaced gear in the Water Processing Assembly. NASA astronaut Kjell Lindgren built a custom tool for lubricating the tip of the Canadarm2 robotic arm, which he and Kelly will do on a spacewalk at the end of October. Japanese astronaut Kimiya Yui installed a Cubesat deployer, and then worked on plant science.

The latest Russian resupply ship, the Progress 61, rolled out to its launch pad today, getting set for a Thursday launch at 12:49 p.m. EDT (4:49 p.m. UTC) and a docking to the Zvezda service module at 6:54 p.m. Meanwhile, Japan’s cargo craft, the “Kounotori” HTV-5, is descending to Earth this afternoon after completing a five-week delivery mission attached to the International Space Station’s Unity module.

The six-member Expedition 45 crew, including the One-Year Crew, worked a variety of science Tuesday looking at plants, performing eye exams and studying crew metabolism and the human respiratory system. The ongoing research is helping scientists and crews prepare for long-term deep space missions and NASA’s Journey to Mars. The space residents also worked on robotic inspections, replaced combustion experiment hardware and swapped batteries on a set of free-floating internal satellites known as SPHERES.

NASA astronauts Scott Kelly and Kjell Lindgren are getting ready for the first of two U.S. spacewalks scheduled for Oct. 28. The duo will lubricate the Canadarm2’s leading end effector (LEE) systems. The LEE is used to grapple, maneuver and release cargo craft, as well as latch on to external station systems. Kelly photographed the LEE today from the seven-window cupola to document its condition and prepare for the upcoming spacewalk. 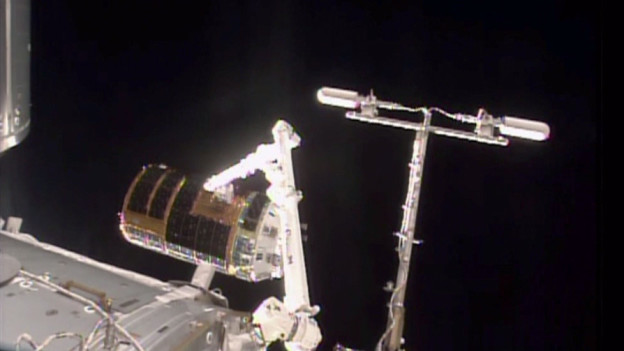 The release of the Japan Aerospace Exploration Agency’s (JAXA) H-II Transport Vehicle-5 (HTV-5) has been delayed. Teams are troubleshooting, and the next opportunity will be at the next day pass at approximately 12:42 p.m. EDT. HTV-5 is still captured, and the crew is in no danger. 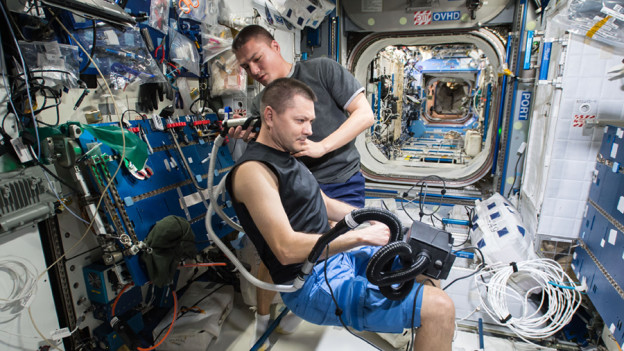 The HTV-5 arrived Monday morning carrying cargo and science for the crew and external experiments to be attached to the Kibo laboratory module. The external research gear includes the CALET dark matter study, the NanoRacks External Platform and a flock of 14 CubeSats.

One-Year crew members Scott Kelly and Mikhail Kornienko are 151 days into their mission. The duo participated in research today looking at the long-term effects of microgravity on the human body. They collected blood and urine samples for the Fluid Shifts study which observes physical changes to an astronaut’s eyes during a space mission.

The spacecraft’s arrival will support the crew members’ research off the Earth to benefit the Earth. The HTV-5 is delivering more than 8,000 pounds of equipment, supplies and experiments in a pressurized cargo compartment. The unpressurized compartment will deliver the 1,400-pound CALorimetric Electron Telescope (CALET) investigation, an astrophysics mission that will search for signatures of dark matter and provide the highest energy direct measurements of the cosmic ray electron spectrum.

Items to be unloaded during HTV-5’s stay at the orbiting outpost include food, crew provisions, supplies, several Cubesats, and the NanoRacks External Platform capable of housing multiple, diverse investigations mounted to the JAXA Japanese External Facility.

The HTV-5 will spend five weeks attached to the international outpost, then the cargo vehicle will be filled with trash, detached from the station and sent to burn up in Earth’s atmosphere.

Join the conversation on Twitter by following @Space_Station and the hashtag #HTV5. To learn more about all the ways to connect and collaborate with NASA, visit: https://www.nasa.gov/connect

NASA TV coverage of the berthing will begin at 9:15 a.m. The installation process to berth HTV-5 to the space station is scheduled to begin at about 9:45 a.m. The Japanese cargo ship, whose name means “white stork” and was chosen because it is emblematic of an important delivery, is loaded with about 4-and-a-half tons of research and supplies.

Yui will command the station’s robotic arm, Canadarm2, to reach out and grapple the HTV-5, while NASA astronauts Kjell Lindgren provides assistance and Scott Kelly monitors HTV-5 systems. Capture is scheduled for approximately 6:55 a.m. The HTV-5 launched aboard an H-IIB rocket at 7:50 a.m. Wednesday, Aug. 19, from the Tanegashima Space Center in southern Japan. Since then, the spacecraft has performed a series of engine burns to fine-tune its course for arrival at the station.

The unpiloted cargo craft, named “Kounotori,” which is Japanese for “white stork,” is loaded with more than four-and-a-half tons of research and supplies, including water, spare parts and experiment hardware, for the six-person International Space Station crew.

The Expedition 44 crew was back at work today continuing a series of biomedical studies, physics experiments and maintenance tasks. Meanwhile, more science is on its way to the International Space Station aboard Japan’s fifth space freighter.

NASA astronaut Scott Kelly collected blood and urine samples and stored them in a science freezer for the Fluid Shifts study. New Flight Engineers Kimiya Yui and Kjell Lindgren continued practicing the robotic techniques they will use Monday morning to capture a new cargo craft and berth it to the Harmony module. Lindgren also checked out spacewalking tools.

The “Kounotori” H-II Transfer Vehicle-5 (HTV-5) from the Japan Aerospace Exploration Agency is delivering more than 9,500 pounds of research and supplies for the six-person station crew. NASA TV will begin live coverage of the HTV-5 arrival Monday at 5:15 a.m. EDT with capture due at about 6:55 a.m.

The HTV-5 is delivering science gear to support several experiments including the CALET dark matter study and a series of 10 investigations for the Twins Study. The HTV-5 will be grappled with the Canadarm2 and berthed to the Harmony module for a month of cargo activities.

The cosmonauts Gennady Padalka, Mikhail Kornienko and Oleg Kononenko worked Thursday on their set of Russian maintenance and microgravity research. They explored the physics of magnetism, internet control of a robotic arm and the human digestive system.

The astronauts on the U.S. side of the space station, Scott Kelly, Kjell Lindgren and Kimiya Yui,  had their list of daily upkeep and science tasks. More Ocular Health exams were on the schedule today as well as magnetic resonance imaging of the brain for the NeuroMapping study. The orbiting residents also worked on the maintenance of laboratory gear.