“This morning, we did a mission management team meeting, and we had a unanimous go for this launch and docking,” said Kenny Todd, deputy program manager of NASA’s International Space Station Program Office. “We’re excited to get on with it; we’ll see how things play out over the next couple of days, but hopefully by the middle of the week, we’ll have a Dragon on the way, if not already attached (to station).”

SpaceX’s Falcon 9 rocket, with the upgraded cargo Dragon spacecraft atop, stands poised for launch at Kennedy’s Launch Complex 39A, and weather officials are now predicting a 50% chance of favorable weather conditions for liftoff. While that’s a slight increase over previous launch forecasts, a cold front moving across the state of Florida will have teams keeping a close eye on the weather.

“Because of that, we’re expecting most of the rain associated with the cold front to be pretty much done before the launch window opens up. We’re not exactly sure when the clouds are going to clear out of the way for us. We’re hoping the earlier the cold front will pass, the more clearing we’ll get.”

The first mission for SpaceX under NASA’s second Commercial Resupply Services contract, CRS-21 will deliver more than 6,400 pounds of supplies, equipment, and critical materials needed to support a variety of science and research investigations that will occur during Expeditions 64 and 65. With SpaceX’s Crew Dragon carrying a crew of four to the orbiting laboratory last month, the mission will also mark the first time two Dragon spacecraft will be attached to the space station simultaneously.

“It really ushers in a season of continuous Dragon presence for the near future,” said Sarah Walker, director of SpaceX Dragon Mission Management. “We’re excited about all of the missions that we’ll be flying for NASA and the International Space Station program, both cargo and crew, and it’s really just an honor to be a part of that.”

Dragon will spend about one month attached to the orbiting laboratory before autonomously undocking and returning to Earth with 5,200 pounds research and return cargo. The spacecraft is slated to splash down in the Atlantic Ocean upon its arrival.

Liftoff is targeted for 11:39 a.m. EST tomorrow, Dec. 5, with live launch countdown coverage beginning at 11:15 a.m. EST. Follow along here on the blog, NASA TV, or the agency’s website. Learn more about the mission at: https://www.nasa.gov/sites/default/files/atoms/files/spacex_crs-21_mision_overview_high_res_0.pdf

Liftoff of the Falcon 9 rocket and cargo Dragon spacecraft is scheduled for 11:39 a.m. EST tomorrow, Dec. 5, from Kennedy’s Launch Complex 39A. Weather officials with the U.S. Air Force 45th Space Wing are predicting a 50% chance of favorable weather conditions for launch. Primary weather concerns are the cumulus cloud rule and the thick layer cloud rule. 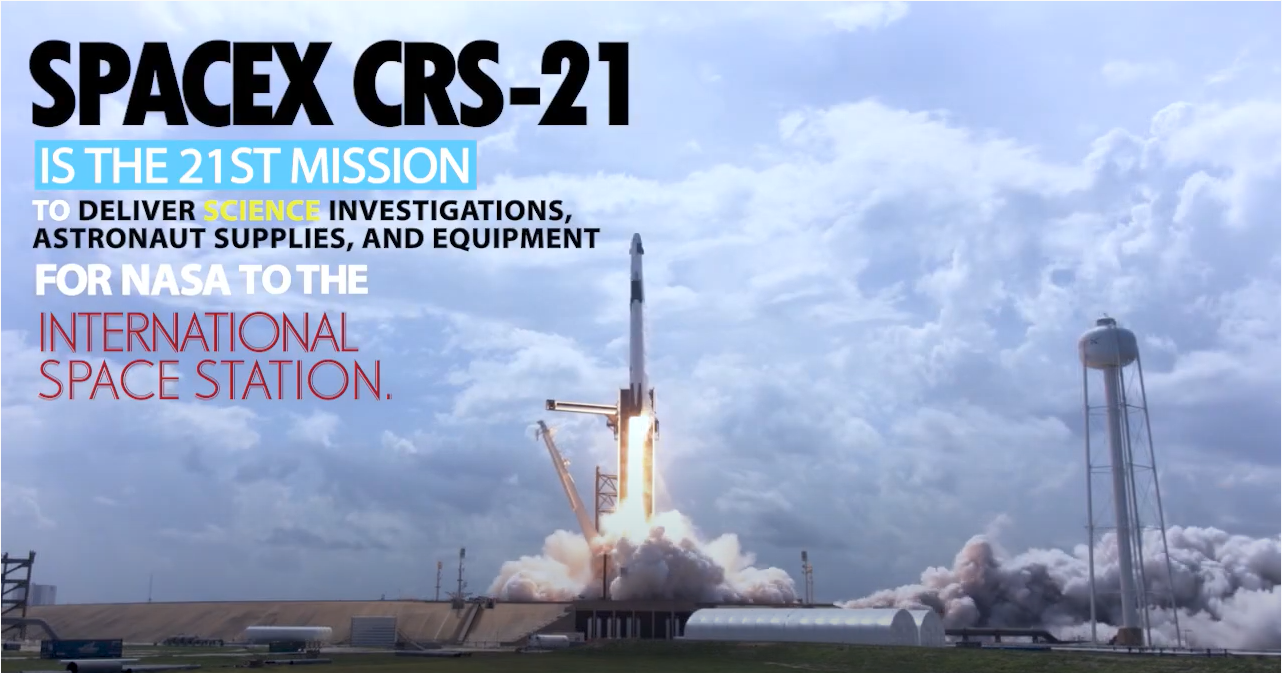 Beginning at 1 p.m. EST today, Dec. 4, tune in for the CRS-21 Virtual #NASASocial Science and Station Q&A, airing live on NASA TV and the agency’s website. Following this, later in the afternoon, there will be a prelaunch news conference (this will occur approximately one hour after the conclusion of the launch readiness review.) Participants include:

SpaceX’s 21st Commercial Resupply Services mission to the International Space Station is scheduled for tomorrow, Dec. 5. Liftoff of the SpaceX Falcon 9 rocket and cargo Dragon spacecraft is targeted for 11:39 a.m. EST from Launch Complex 39A at NASA’s Kennedy Space Center in Florida. Live launch coverage begins at 11:15 a.m. EST here on the blog, NASA TV, and the agency’s website.

Packed inside Dragon are critical science investigations, supplies, and equipment bound for the orbiting laboratory. One item for delivery is the Nanoracks Bishop Airlock – the first commercially owned and operated airlock that, once installed, will provide a variety of capabilities to the space station, such as payload hosting, robotics testing, and satellite deployment.

Learn more about some of the science and payloads on board at: https://www.nasa.gov/mission_pages/station/research/news/spacex-21-research-highlights.

Expedition 64 is getting ready for over 6,400 pounds of cargo due to arrive this weekend aboard the next-generation SpaceX Dragon space freighter. All seven International Space Station residents also were immersed in microgravity research throughout Thursday.

The SpaceX Falcon 9 rocket carrying the Dragon cargo spacecraft has rolled out to the launch pad at Kennedy Space Center in Florida and is counting down to a Saturday lift off at 11:39 a.m. EST. Weather-permitting Dragon, would automatically dock just under 24 hours later to the Harmony module’s space-facing port adjacent to the SpaceX Crew Dragon vehicle.

The Cargo Dragon’s main payload is the NanoRacks Bishop airlock that will be robotically attached to the Tranquility module. Bishop will increase the capacity for external space research at the space station benefitting public and private organizations.

The orbiting lab was humming today with a host of advanced space science looking at a variety of microgravity phenomena to enhance life for humans on and off the Earth.

Flight Engineers Michael Hopkins and Sergey Kud-Sverchkov swapped fuel bottles inside the Combustion Integrated Rack than enables safe investigations of flames and fuels on the station. Eye exams were on the slate this afternoon for astronauts Kate Rubins and Soichi Noguchi who also serviced botany and cell biology research gear.

Finally, station Commander Sergey Ryzhikov of Roscosmos wrapped up a 24-hour session that monitored his heart activity. The two-time station resident also explored ways to improve the workspace inside the station.

CRS-21 is the first mission under the company’s second Commercial Resupply Services contract with NASA and the first flight of the upgraded cargo version of Dragon 2. The mission will deliver supplies, equipment, and critical materials to support dozens of the more than 250 science and research investigations that will occur aboard the orbiting laboratory during Expeditions 64 and 65.

Liftoff of the Falcon 9 is scheduled for 11:39 a.m. EST, and Dragon is slated to autonomously dock at the space station at approximately 11:30 a.m. EST on Sunday, Dec. 6. NASA astronauts and Expedition 64 Flight Engineers Kate Rubins and Victor Glover will monitor docking operations.

Follow live coverage of the CRS-21 mission and prelaunch events here on the blog, NASA TV, and the agency’s website:

A SpaceX Falcon 9 rocket, topped with the upgraded version of the Cargo Dragon spacecraft, is seen inside the company’s hangar at NASA’s Kennedy Space Center in Florida on Dec. 2, 2020, prior to being rolled out to the launch pad in preparation for the CRS-21 launch. The rocket and spacecraft are slated to make the short journey to the pad later this afternoon.

The first launch for SpaceX under NASA’s second Commercial Resupply Services contract, CRS-21 is scheduled to lift off from Kennedy’s Launch Complex 39A on Saturday, Dec. 5, at 11:39 a.m. EST. Weather officials with the U.S. Air Force 45th Space Wing predict a 40% chance of favorable weather conditions for liftoff, with primary concerns revolving around flight through precipitation, the cumulus cloud rule, and thick cloud layer rule.

The mission will deliver critical supplies and equipment to the International Space Station. Included in that delivery are materials for a variety of science experiments, including meteorite samples and microbes, 3D engineered heart tissues, and a tool being tested for quick and accurate blood analysis in microgravity.

Learn more about some of this mission’s science and its payloads at: https://www.nasa.gov/mission_pages/station/research/news/spacex-21-research-highlights/

To enable additional time to evaluate flight data from Crew-1 and close out certification work ahead of this first flight of the cargo version of Dragon 2, teams are now proceeding toward a planned liftoff at 11:39 a.m. EST on Saturday, Dec. 5, from Launch Complex 39A at the agency’s Kennedy Space Center in Florida, with the Dragon spacecraft arriving to autonomously dock at the orbiting laboratory on Sunday, Dec. 6, at approximately 11:30 a.m.

The science to be delivered on this mission includes a study aimed at better understanding the effects of microgravity on cardiac function in human heart tissue, research into how microbes could be used for biomining on asteroids, and a tool being tested for quick and accurate blood analysis in microgravity. The first commercially owned and operated airlock on the space station, the Nanoracks Bishop Airlock, will arrive in the unpressurized trunk of the Dragon spacecraft. Bishop will provide a variety of capabilities to the orbiting laboratory, including CubeSat deployment and support of external payloads.

While SpaceX continues preparations for the launch of NASA’s SpaceX Crew-1 mission to the International Space Station as part of the Commercial Crew Program, the company also is getting ready for the agency’s next cargo resupply mission to the orbiting laboratory.

SpaceX’s 21st resupply mission for NASA, its first under the second-generation Commercial Resupply Services (CRS-2) contract, will be the first resupply mission to use the upgraded version of the Dragon spacecraft. The flight will bring science and supplies to the newly expanded Expedition 64 crew beginning with liftoff on the SpaceX Falcon 9 rocket from Launch Complex 39A at NASA’s Kennedy Space Center in Florida.

NASA and SpaceX currently are targeting no earlier than 12:50 p.m. ET on Wednesday, Dec. 2, for the CRS-21 launch, pending Eastern Range acceptance and successful preparations and an on-time liftoff of Crew-1, also from Launch Complex 39A.

The science to be delivered on this mission includes a study aimed at better understanding heart disease to support development of treatments for patients on Earth, research into how microbes can be used for biomining on asteroids, and a tool being tested for quick and accurate blood analysis in microgravity. The first commercially owned and operated airlock on the space station, the Nanoracks Bishop Airlock, will arrive in the unpressurized trunk of the Dragon spacecraft. Bishop will provide a variety of capabilities to the orbiting laboratory, including CubeSat deployment and support of external payloads.

The first commercially funded airlock for the International Space Station is ready for its journey to space. On Saturday, Oct. 10, teams moved the Nanoracks Bishop Airlock to SpaceX’s processing facility at NASA’s Kennedy Space Center in Florida. Two days later, it was packed in the Dragon spacecraft’s trunk for its ride to the orbiting laboratory.

The airlock will provide payload hosting, robotics testing, and satellite deployment, and also will serve as an outside toolbox for crew members conducting spacewalks.

The Bishop Airlock is launching on SpaceX’s 21st commercial resupply services (CRS-21) mission to the space station. This will be the first flight of SpaceX’s upgraded cargo version of Dragon, which can carry more science payloads to and from the space station.

The pressurized capsule will carry a variety of research including studies on the effects of microgravity on cardiovascular cells, how space conditions affect the interaction between microbes and minerals, and a technology demonstration of a blood analysis tool in space.

CRS-21 is scheduled to launch aboard a Falcon 9 rocket from Kennedy’s Launch Complex 39A. Teams are targeting late November or early December for liftoff.