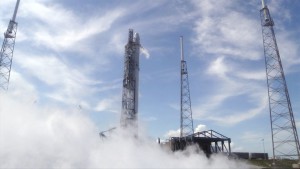 Named for the Millennium Falcon of Star Wars fame, the SpaceX Falcon 9 is the booster that sends the Dragon spacecraft , loaded with cargo and experiments, into orbit.

The Falcon 9 and Dragon combination measures 208-feet-tall and is 12 feet in diameter. The first stage is powered by nine Merlin 1D engines that produce 1.3 million pounds of thrust at liftoff. The first stage engines burn for about three minutes to push the Dragon out of the atmosphere. The second stage of the Falcon is powered by a single Merlin 1D engine. It places Dragon in its final orbital trajectory to catch up to the International Space Station.

After the second stage separates, small thrusters on the Dragon make adjustments to the orbit to steer the spacecraft into a position where the station’s robotic arm can capture the spacecraft and connect it to the orbiting laboratory.