In 2012, Voyager 1 — one of a pair of deep-space probes launched in 1977 — crossed into a part of space no other spacecraft had ever seen: the interstellar medium. At over 11 billion miles from the Sun, several crucial changes were detected in the data Voyager 1 was sending back to Earth – key observations to show that Voyager 1 was entering interstellar space.

All the planets in the solar system are surrounded by a constant outpouring of material from the Sun, called the solar wind, which creates a giant bubble called the heliosphere.  Eventually, this solar wind peters out, held back by the wind coming from other stars – and this is the boundary that Voyager 1 crossed. (The gravitational effect of the Sun extends much further, so the solar system itself continues out trillions of miles, with additional asteroids and cometary bodies orbiting our star.)

Now, recent data from the Voyager 2 spacecraft gives us the first indication it too is about to cross over the heliopause — the final boundary of the heliosphere — to interstellar space. Scientists are looking to what happened in Voyager 1 observations to estimate where Voyager 2 is in its own journey.  As Voyager 1 neared that border, it began to see more particles that originated outside the heliosphere and fewer that originated from inside it. It also observed that the magnetic field that Voyager 1 was experiencing changed in magnitude, increasing beyond what was typical within the rest of the heliosphere.

The following graph shows the data from Voyager 1 around the time it crossed over the heliopause. The vertical scale of the graph is the count rate of the galactic ray particles, or how many particles per second are interacting with the CRS on average for each day. The horizontal scale of the graph is the time, from Jan. 1, 2018 to March 14, 2019. (Note: the time has been shifted forward 6.32 years, to line up with the Voyager 2 data in the next graph). Reading from left to right, showing Voyager 1 CRS data over time, the observations show more and more of the high energy particles from the interstellar medium – indicating that the farthest reaches of the solar wind is increasingly unable to halt the progress of the incoming galactic cosmic rays.

This next graph adds the observations from Voyager 2’s CRS from September 2018, overlaid on top of the Voyager 1 data from 2012:

Note how similar the two data sets are. This is our first hint that Voyager 2 is crossing through a region similar to the one that Voyager 1 did – it’s nearing the heliopause.  Perhaps the data will continue to match up perfectly – and we can expect Voyager 2 to cross out of the heliosphere by January 2019, three months after first spotting elevated galactic cosmic rays, just as Voyager 1 did.

There are several differences between Voyager 1 and Voyager 2 that make the exact date of the crossing difficult to predict.

Once Voyager 2 crosses from the heliosheath into the interstellar medium, the galactic cosmic rays will level out, or plateau, much like they did with Voyager 1. Then the heliospheric particles will lessen and die down, and the magnetic field might increase in magnitude. These are the trends Voyager 1 saw, and we can expect to see them again.

Scientists will also be watching for a whole new set of observations: Voyager 2 still has an instrument powered on that was not working on Voyager 1 when it crossed the heliopause. Voyager 2’s Plasma Science instrument can measure the density, temperature and speed of the solar wind plasma, which may give more information about the differences between the heliosphere and the interstellar medium.

So, when will we get there? We’re not exactly sure — but that’s the exciting part.

Learn more about the Voyager missions and keep an eye on The Sun Spot for more information as we follow Voyager 2 into the unknown.

On Aug. 20, 2018, a Coronal Mass Ejection — an explosion of hot, electrically charged plasma erupting from the Sun — made its way towards Earth. By Aug. 26 it had hit — and aurora were visible as far south as Montana and Wisconsin in the United States.

NOAA’s DSCOVR satellite (short for Deep Space Climate Observatory) watched it all go down. DSCOVR’s measurements track magnetic field strength and direction – two aspects of a CME that determine how much it will affect Earth.  These data, and the unique view of a CME that they provide, are why DSCOVR is such a useful tool for NASA’s space weather forecasters, detecting CMEs between 15 minutes to an hour before they strike Earth. Here’s a plot showing what DSCOVR saw before the CME hit it, while it was passing over, and after it passed. 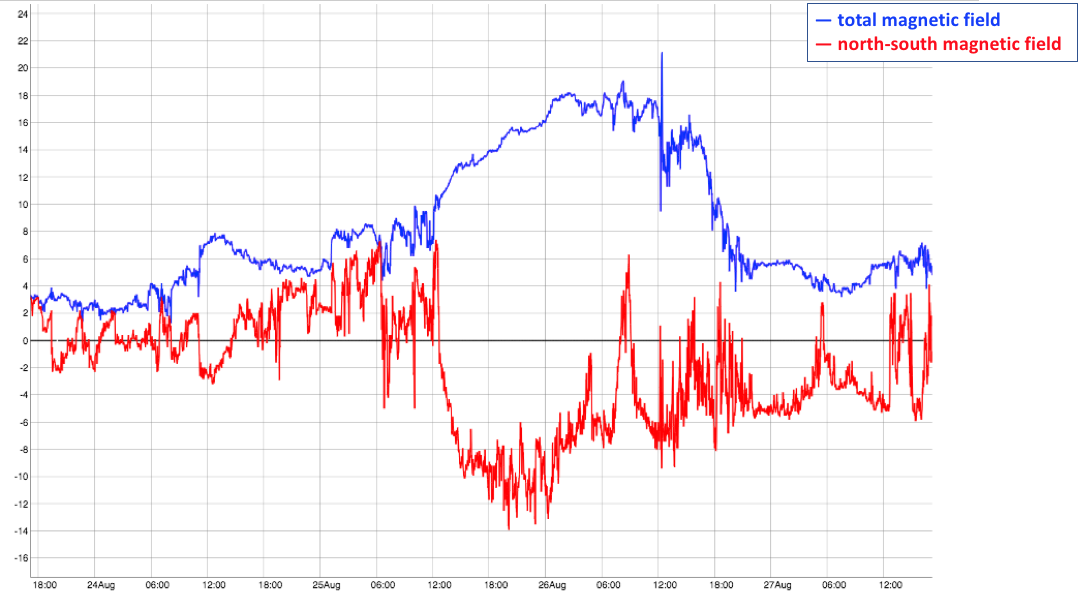 Let’s walk through what happened.

Some CMEs leave the Sun so fast that they create a shock: a pile-up of solar wind plasma at their front end that creates jagged lines in DSCOVR data, like a Richter scale during an earthquake. This CME was moving comparatively slowly, so no real shock is apparent.

The beginning of a CME looks very similar to the regular solar wind, so in real-time, just as it starts, space weather forecasters check plots of plasma density and speed (not shown here) to help determine if they’re really seeing a CME.

Once the CME has passed, it leaves gusty, turbulent plasma in its wake before petering out into the solar wind. Magnetic field readings return to their normal levels. 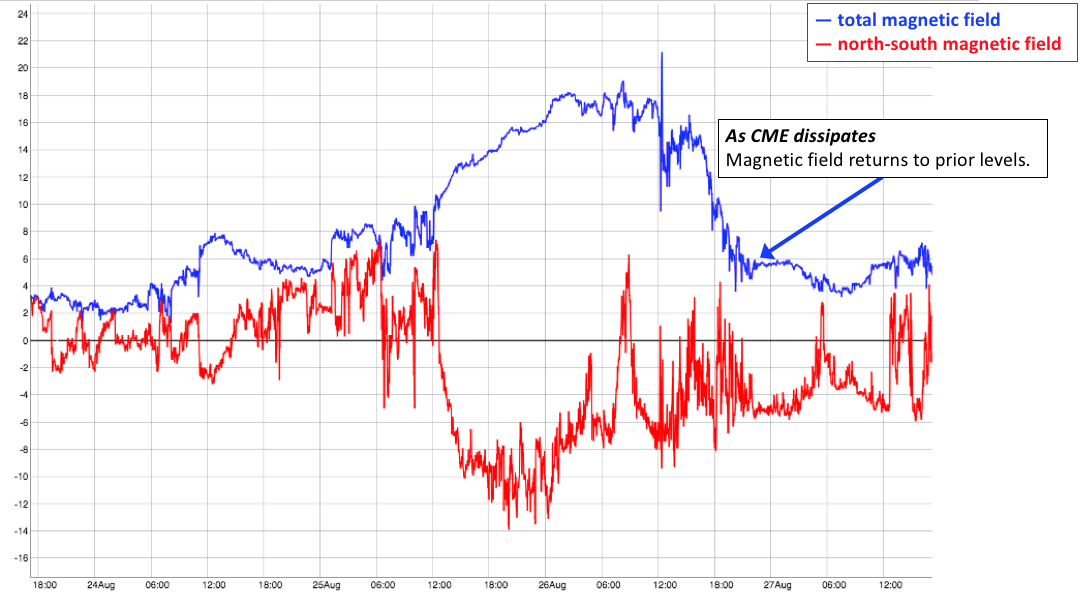 Depending on DSCOVR’s observations and further simulations, warnings may be sent out to agencies that operate satellites. The Aug. 20 CME (it hit Earth on the Aug. 25, but CMEs are labeled based on when they left the Sun) was not fast enough to warrant these alerts. However, its strong north-south component was strong enough to generate a geomagnetic storm: on the 0 – 9 Kp scale, which measures the disturbance in Earth’s magnetic fields, this one clocked in at a 7. News outlets and blogs reported on it, and aurora sightings right after the event were documented on Aurorasaurus — NASA’s aurora-detecting citizen science collaboration, where real-time aurora sightings are scraped from the web via Twitter or reported directly on their website. Here’s a photo from one user in Fairbanks, Alaska, posted just after midnight on August 26.

Twelve years is long enough for Hinode to observe most of a complete solar cycle. The above image represents Solar Cycle 24 as observed with Hinode’s X-Ray Telescope, or XRT. The XRT observes the Sun’s hot corona, or solar atmosphere, in soft X-rays — wavelengths of light that reveal solar activity reaching tens of millions of degrees Fahrenheit.

The solar cycle refers to an 11-year-long period (on average) during which the Sun’s magnetic field flips — north becomes south, and vice versa — and magnetic activity increases and then decreases. Although driven by the Sun’s internal magnetic dynamo, the progression of the solar cycle is marked by activity visible on its surface and in the corona, including bright solar flares and dark sunspots. The corona, as documented by Hinode’s XRT, reveals an extensive amount about the Sun’s variable activity.

In the graphic above, the farthest (smallest) image is from 2007 and each image increments clockwise by one year. The nearest (largest) image is from 2013, around solar maximum. Note the enhanced presence of bright active regions in the closer images, as the Sun approaches solar maximum. Solar Cycle 24 began on January 4, 2008 with the emergence of a bright active region in the north, and is expected to reach its minimum sometime in 2019.

Hinode’s XRT has taken full-disk synoptic images twice daily for the whole mission (aside from its monthly 3-day maintenance periods).  This long baseline set of measurements extends the cycle of observations from Hinode’s predecessor, Yohkoh, which ended in 2001.

On Sept. 11, 2018, at approximately 6 a.m. local time in eastern South America, NASA’s Global-scale Observations of the Limb and Disk, or GOLD, mission sent back its very first image.

Maps like this one enable researchers to determine global-scale temperature and composition at the dynamic region where Earth’s upper atmosphere meets space. The image shows ultraviolet light (135.6 nm) — a kind of light that’s invisible to the human eye — emitted by atomic oxygen present approximately 99 miles (160 km) above Earth’s surface. The colors in the image correspond to emission brightness: The strongest emissions are shown in red and the weakest in blue. Known as “airglow,” this light is produced by oxygen as it transitions from an excited state to a lower energy state. Outlines of the continents and a latitude-longitude grid have been added for reference.

The right side of the image shows the Sun-facing side of Earth, revealing daytime airglow, but emissions at the North and South Poles extend to the left, into the night side. These are the aurora borealis (northern lights) and australis (southern lights). The northern lights are more clearly visible in this image because their location depends on Earth’s magnetic dipole field, which is tilted southward over North America at the top left of the image. At the southern horizon, the magnetic field is tilted slightly away from the Americas.

The speck of light visible over the western horizon is an ultraviolet star, 66 Ophiuchi (HD 164284).

GOLD launched from Kourou, French Guiana, on Jan. 25, 2018, onboard the SES-14 satellite and reached geostationary orbit in June 2018. Built by the University of Colorado Boulder’s Laboratory for Atmospheric and Space Physics, and managed by NASA’s Goddard Space Flight Center in Greenbelt, Maryland, GOLD will improve our understanding of the Sun’s impact on Earth’s upper atmosphere as well as the effects from terrestrial weather below. GOLD commissioning — the period during which the instrument’s performance is assessed — began on Sept. 4 and will run through early October, as the team continues to prepare the instrument for its planned two-year science mission.