A while back, during thevisit to Glenn Research Center, one of the places I toured was the SpaceMechanisms SimulatedLunar Operations, or SLOPE, facility, also known as “the sand box.” That’sbasically what it is: a unique, indoor, climate-controlled, 60-by-20-footsandpit filled with simulated lunar soil for the purpose of testing wheels andtires being developed for future use on the moon and Mars. 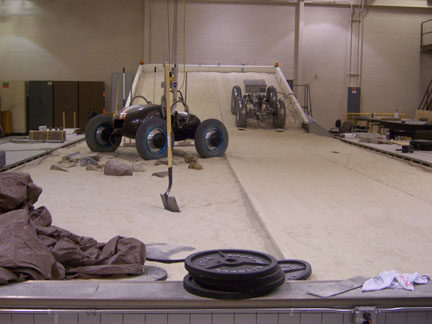 In the pit, on the day I was there, were several lunar roverprototypes with different tire and wheel designs being tested. One of thevehicles was a half-scale replica of the original lunar rover used byastronauts on the moon in the 1970s. On the rover were replicas of the tiresused on the moon. When the SLOPE team wasn’t able to use original Apollo-eratires, they decided to make their own. One of our guides, Phillip Abel, saidmaking Apollo-era wheels turned out to be a somewhat challenging task. The teamhad the original documents used to make the Apollo wheels, but some of the datawas missing. So some of the original engineers on the project were called in tohelp fill in the gaps. In order to recreate the wheels, they also had torecreate the jigs used to crimp and weave the unique Apollo tire pattern.

The tires were all handmade, Abel said. A total of 12 wereproduced.

On the day we were there, one set of the tires was on thehalf-scale lunar rover, one set was on loan, one tire was on display locally,and the others were stored on a rack, chained together and secured with apadlock. Abel said students at Virginia Tech and Carnegie Mellon have used someof the replicas and the SLOPE facility in some of their research. It’s amazingto me to think what a unique experience it is for these students to have accessto work with these old tire designs. Original Apollo tires are in very limitedsupply, and 12 of them are really hard to get to as they are still on thesurface of the moon. Also, having just attended NASA’s Great Moonbuggy Race the weekbefore, I couldn’t help but think about the students who participate in thatand wonder if there’s some potential there for those students to look at doingsomething different with the tires and wheels on their moonbuggies.

This tire is the “spring tire” developed by NASA andGoodyear through
NASA’sInnovative Partnerships Program. Thisvideo on the IPP website talks about the tire design and shows some of thetesting done in the SLOPE lab. The video also shows some of the original Apollotire engineers who were called in to help with the replications.

Here are snapshots of two other tires I saw in the lab.