Some day I hope I get to talk to an astronaut in space. I’vetalked to quite a few on Earth, but to talk to one while he or she is in spacewould be awesome, don’t you think? My most recent astronaut interview, though,actually took me farther way from my goal than closer. My last astronautinterview was with ChrisHadfield while he was 62 feet below the surface on a NASA undersea mission. 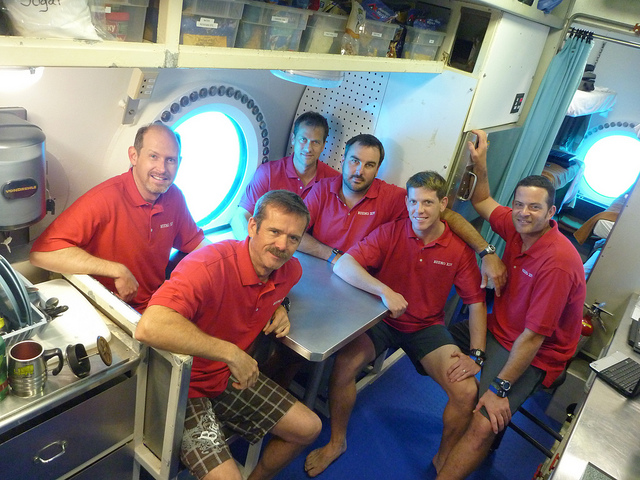 I interviewed Hadfield during NEEMO 14,an underwater mission to the Aquarius habitat. NEEMO is the NASA ExtremeEnvironment Mission Operations project, which basically sends groups of NASAemployees and contractors to live in an underwater habitat for weeks at a time.Crews do this as an analog to space exploration, experiencing some of the sametasks and challenges underwater as they would in space.

On the call, I was most interested in asking CommanderHadfield about the team’s use of social media and how that was impacting themission. The team had an impressive social media lineup including @NASA_NEEMO and @ReefBase on Twitter, a NASANEEMO Facebook page, the NASAAnalogs Blog, the NASAAnalogs Flickr page, and NASAanalogTVon YouTube. Hadfield said he was skeptical going into it but all the tweetingand blogging ended up with quite the positive impact.

“When we were preparing for NEEMO14, our crew here, they asked us take advantage of the fact that there areother ways, through the Internet, to communicate, that you can report real timethrough tweets or Facebook or blogs your thoughts and your transient emotionsand your real-time experiences. Which of course if you’re on a trip with peoplethat’s the most interesting part, is how do you feel now, what’s going on now,how’s life flowing around you. Well, suddenly it’s not just a dryafter-the-fact report, but it can be a real-time voyage of what is happening.And as a person who’s grown up with more traditional media, to me that’s aforeign idea, and I’m suspicious of it because I don’t know how it’s going towork, I don’t have any experience with it, and I know it’s going to increase mycrew’s workload to do it.So let me say, I’ve been delightedwith what it has done both for the ability for us to interact with people allaround the world but also what it did for the crew. It has allowed us as agroup to constantly, almost be forced to, express out loud what it is we’rethinking about and what it is we’re feeling and what’s special to us and whatis remarkable to us. And you really shouldn’t hoard something that is importantto you or something that is magnificent to you. And so by forcing people to(say) “Hey, I just saw something really cool,” well, shoot, tweet it, put itout there. And people have been twittering and tweeting and our lead hab techhere, he was dancing and celebrating when he sent his very first tweet, whichsounds silly but now he is sending them every time he has a thought aboutsomething that’s really important to him. And we have … gone from a few to afew dozen to a few hundred to in the thousands of people that are directlyfollowing what we’re doing down here, purely as a result of using a newtechnology to help spread the human experience.And it also, I think, allows us tomore clearly articulate it to ourselves and to each other. So I really enjoyedit, and I’m a big proponent of it now as a crew to have that capability. So asAndrew (Abercromby, a NASA engineer on the mission) is there talking to the twocrew members outside, he’s regularly posting information that they’re comingacross.We invited people all around theworld to help us name parts of the reef. As we’re out there exploring unknownparts of the reef, we come around a corner and we need to give something a nameso we can use it as a navigation point, and we have schools and organizationsand individuals from all around the world giving us names that we immediatelyuse and apply to these locations. When I play guitar … we have people offeringsuggestions of what to play. Of course, not everyone is interested ineverything, but for the people that are interested in exploration and in divingand in new understanding of some of the real hostile and extreme environmentsaround the world, this is a fascinating way to include them, and we’ve beenspeaking to a lot of schools that way too.We know there are whole classroomsthat are following along just as a result of the new social media that we’reusing. So I’ve been really pleased with it, and I think if we just look at theway that we’re tracking it to see how many people are actually tied in, I thinkit’s a really worthwhile thing to do.” 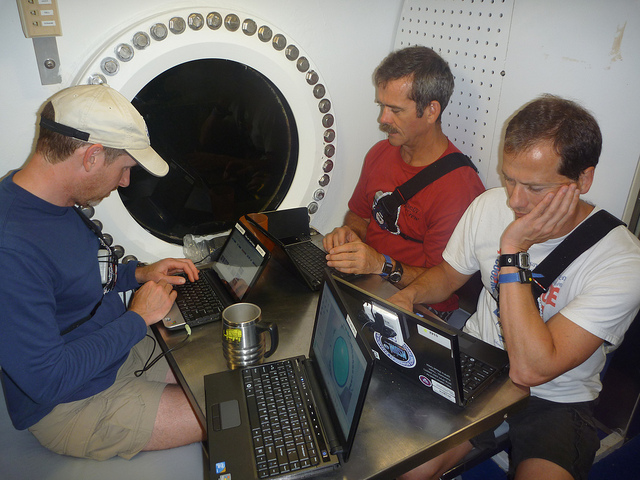 A very awesome answer, I thought, to know that social mediatools like Twitter and Facebook and blogs are not only working as outreachtools but helping to build crew morale by connecting them with the outsideworld. That could be pretty important to know for six-month stays on theInternational Space Station or even longer voyages to other places in space.NASA is really diving into the use of social media toolswith a variety of blogs, Twitter accounts and Facebook pages for the agency’smany missions and projects. Here’s a listing of all thedifferent ways you can keep up with NASA’s blogs, tweets, flickrs and more, andif you’re not a member already, join the NASA Students group onFacebook for information about NASA student opportunities like internshipsand co-ops. Maybe you’ll land a NASA co-op position like astronaut Karen Nybergwho went on to become an astronaut and participated in 2006 in NEEMO 10. (Readmore about Nyberg’s pre-astronaut days and co-op experiences in thisfeature article I wrote about her as she was preparing for the STS-124space shuttle mission in 2008.)