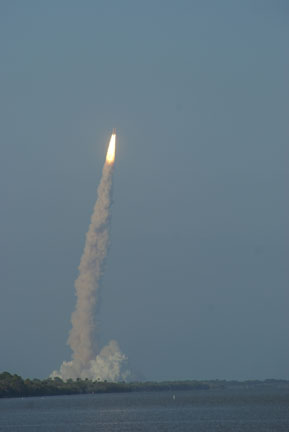 “Whew. That was close. Everything was looking ideal for launch and then there was a problem and then we were in a hold with less than two minutes to fix the problem. Then the Shuttle Range Office gave the green light, just in the nick of time. We counted backwards from 10 to 1, and she launched!”

Those were my thoughts Thursday as I reflected on watching the STS-133 launch. It’s still crazy to me to think about it.

It was a gorgeous day in Florida. But a perfect Florida day doesn’t necessarily mean a perfect launch day so I didn’t want to let the beautiful weather fool me. NASA was saying weather conditions were at 90 percent “go.” A couple of us even commented that we couldn’t recall ever seeing it that high.

We had a great time all afternoon leading kids in launching rockets and in building and experimenting with robotic fingers and hands. Then it was time to head over to the pier to watch the launch.

Earlier in the day, we used folding chairs to stake out a place on the pier, and the kind folks around us helped secure our spot. We all got in place with the kids in our group up close to the pier, the adults standing behind them and all eyes looking east toward the launch pad.

A couple of us hovered around a two-way radio listening to mission control updates. In one of the updates it was announced that there was a problem. The STS-133 launch blog reported: “The Range Safety Officer reports the Eastern Range is ‘no-go’ due to problems with its central command computer. Standby to see if the issue is resolved.”

The decision was made to come out of the nine-minute hold but to stop the clock again at T minus five minutes to give the range more time to fix the problem.

More time, it turns out, was a little more than two minutes.

Two minutes?!? No pressure or anything, right?

We, on the pier, and as I can imagine all who were watching live and on NASATV, were on pins and needles! Finally the call came through. The Range Safety Officer had given the green light for launch. Discovery was going to launch! Yea!! 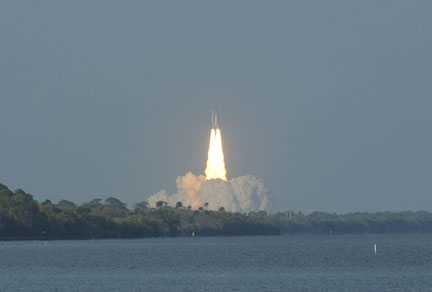 The next two minutes passed quickly. In unison we slowly counted 3-2-1. The first thing I recall seeing — the thing that told me the shuttle had indeed launched — was billowing smoke and steam and then I saw flames. I saw a bright streak moving slowly upward and for some reason this was surprising to me. I’ve watched many launches on NASA TV where the camera stays focused on the orbiter the whole time but I had never really seen or appreciated the flame before. These flames were fierce and bright and powerful.

After just a few seconds, the shuttle and the flames disappeared behind a group of clouds, briefly reappeared, and then disappeared for good. What were left were a swirling smoky contrail and a large group of smiling happy adults and children already retelling their experience — the pins and needles, the smoke, the flame, the excitement of having seen the last launch of Discovery and having participated in a historical event that they’ll remember the rest of their lives.