NASA is going to crush a giant can. The “can” is a 27.5-foot-wide-by-20-foot-tall, barrel-shaped section similar to the space shuttle external tank. The “crushing” is the application of potentially more than 1 million pounds of force on the barrel. At some point in the test, the force being applied to the barrel will cause the barrel to buckle. It’s that point that NASA engineers want to understand. They’ve used computer models to predict it and now they want to test it out. Does the moment at which the computer says the cylinder will buckle prove to be right?

Imagine taking your foot and stepping on a soda can. The soda can will buckle and bend and eventually crush underneath your weight. That’s the same thing NASA is doing here, except bigger! They want to know the exact point at which the giant aluminum lithium tank buckles. Launch vehicles experience pressure from all directions during a launch, whether it is due to the vehicle’s weight, thrust, aerodynamic pressure, and so on. Launch vehicles have to be built to withstand these millions of pounds of pressures, or loads, from multiple directions. This test is a critical part of that research.

I took a tour this week of the Structural and Dynamics Engineering Test Laboratory, where the oversize experiment is being conducted the morning of March 23 at NASA’s Marshall Space Flight Center, in Huntsville, Ala. Guiding me on the tour were NASA test engineers Dee VanCleave and George Olden. Dee and George are part of the Structural Strength Test Group at Marshall. 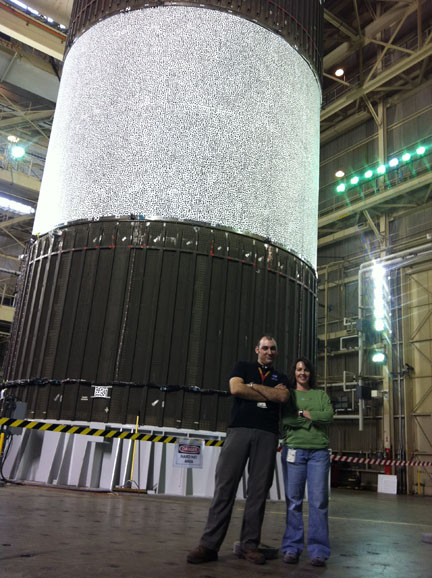 These two and the whole Structural Test Group team have been preparing for this test for more than a year. Something of this magnitude took a lot of pre-planning. During the tour they told us how they had to manufacture larger tools just to do the necessary tasks to prepare the barrel (or test article, as it’s more officially known) and the facility for the test.

The results of the test will help NASA and commercial partners develop lighter launch vehicles. Today’s rockets are more robust than they have to be because the standards being used to make them are decades old. The findings from this research would be applied to the design and the development of rockets and aircraft — or anything with a buckling critical cylindrical structure, George explained.

The Load Test Annex where the test will happen was built decades ago during the development of the Saturn V rocket. It was used in the late ’70s in the structural testing of the space shuttle external tank. Testing for the International Space Station, and other shuttle-related projects, took place in the adjoining Load Test Annex Extension. But the LTA is geared toward structural test projects of a larger magnitude — large like the Saturn V and large like the external tank.

The test is a big deal — literally, of course, but also in terms of the data NASA will gain. The data from this research will be used to make launch vehicles lighter, which means they are cheaper to launch and that they could carry more cargo. It’s also interesting to me to see a facility that was used in the testing of moon rockets and in the development of the space shuttle come back to life.

You can participate in a live webcast of the event via the MSFC Ustream channel, which will include video, Facebook and Twitter updates, beginning at 10:30 a.m. EDT the day of the event.

During the two-hour live stream you can see the test and also hear from the people behind it. Dee and George will be there talking about what’s going on and about some of the smaller-scale research that led up to this point. Also aired will be interviews with Dr. Mark Hilburger, senior research engineer at NASA’s Langley Research Center and the principal investigator behind the project, and Mike Roberts, an engineer in Marshall’s Structural Strength Test branch and Marshall’s lead for this test activity.

Want to know more? Background information on the test and the research behind it can be found in the NASA news feature “NASA Readies for World’s Largest Can Crusher Test” and in the NASA Media Advisory about the event. There’s also an article from the NASA Engineering and Safety Center, or NESC who has requested the test, explaining how preliminary tests on smaller eight-foot cylinders confirm launch vehicle weight and cost savings. The NESC also published an article detailing the purpose of the Shell Buckling Knockdown Factor project.