NASA hosted its first shuttle launch Tweetup in May 2010 for the STS-132 mission. A second launch Tweetup was held in February 2011 for the STS-133 mission. As an active follower of the @NASA twitter account, I’d seen posts about both of these events and the unique experiences the Tweetup participants had taken part in. So when a call for applicants for the STS-134 Tweetup went out, it piqued my interest.

The sign-up time period was only 24 hours long, and on a whim, I thought I’d sign up. With over 4,000 applicants and only 150 slots to fill, I really didn’t think I’d have a chance to actually get selected. But I thought, “why not, might as well give it a shot.”
So, when I received the email telling me that I’d been selected, I couldn’t believe it! After checking the calendar, I eagerly responded to accept the invitation.

And then the waiting game began. The launch date that was originally planned for April 19 slipped to April 29 because of a scheduling conflict with the arrival of a Progress re-supply vehicle at the space station. Luckily, the NASA team organizing the Tweetup was able to shift the Tweetup dates. Hotel, flights and rental car were booked, and I was ready to start my STS-134 Tweetup adventure! 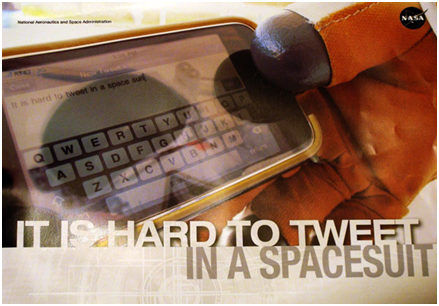 STS-134 Tweetupparticipants received this poster as part of their Tweetup goodie bag.

The first day of the Tweetup was a whirlwind filled with presentations, tours and getting to meet a lot of really awesome space enthusiasts!

After scoping out a prime spot near the front of the Tweetup tent, meeting everyone at my table, and setting up my laptop, it was time for the day’s events to begin. NASA public affairs officer John Yembrick welcomed everyone and kicked things off by having all 150 Tweetup participants introduce themselves. Hearing everyone’s background and where they were from was a fun ice-breaker.

After lunch, a group of NASA scientists and engineers presented on a variety of topics. We learned about the different layers of a spacesuit, exciting science experiments taking place on the space
station, and what it takes to keep everything on track to get a space shuttle mission off the ground. Astronaut Clay Anderson was the rock star of the day though. Hearing him speak about what it’s like to orbit the planet was amazing.

Next up for the day was a tour of some of the facilities at Kennedy Space Center. The highlight of the tours for me was definitely getting to go inside the Vehicle Assembly Building. The VAB is one of the largest buildings in the world. Originally built for assembly of the Saturn V rockets that took astronauts to the moon, it’s currently used for shuttle assembly. During the tour, I overheard a fellow tweep call the building a “cathedral to exploration,” and I couldn’t agree more with the comparison. The sheer size of the building inspired such an incredible sense of awe. And to think of the history, of all of the rockets that have been assembled there, it was truly an honor to be walking on such hallowed ground.

A trip to watch the retraction of the Rotating Service Structure (the gantry on the launch pad that protects the shuttle and allows for payload packing) had to be scrubbed due to thunderstorms. So it was back to the hotel for the evening. Time to rest up and dream of a shuttle launch! 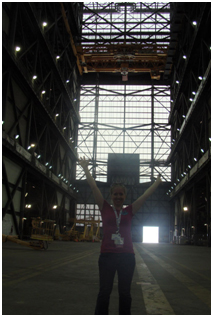 Standing inside the Vehicle Assembly Building is amazing
Pictures don’t do it justice!

Didn’t get much sleep last night! Too excited about seeing the launch today!

We kicked off the morning with a group photo near the famous countdown clock.

The STS-134 Tweetup participants pose for a picture next to the countdown clock.

Then it was back to the tent to hear from astronaut Ricky Arnold and astronaut and Associate Administrator for Education Leland Melvin. Both had really inspiring stories of what led them to NASA and how education played a key role in their career choices.

LEGO designer Daire McCabe spoke to us about the LEGO kits heading to the space station aboard space shuttle Endeavour. The astronauts are going to assemble the kits, and kids on Earth can watch videos of the assembly and build along with the astronauts. I’m excited to see what kind of creative masterpieces the astronauts build without the constraints of gravity.

After a visit from weather officer Patrick Barrett, who gave us an optimistic report on launch time weather, the group headed out to the Saturn Causeway to watch the Astrovan with the crew drive by on their way to the launch pad. This was something I was looking forward to almost as much as getting to see a launch. Waving to a group of people just hours before they rocket off of the planet is a pretty amazing thing to do.

As we waited for the Astrovan, there were rumblings of a possible launch delay. Some of the press corps were getting updates and things weren’t sounding too promising. But then we saw the van heading our way and our hopes lifted. As the van approached, we began to cheer and the excitement was palpable. Then the van turned directly in front of us and headed to a parking area behind mission control. We knew this wasn’t a good sign. After sitting for a few minutes, the van came back to the causeway and turned back toward the crew quarters, away from the launch pad.

We later learned that a problem with an auxiliary power unit caused the scrub. Tests were being run, and no one was sure how long the delay would last. 24 hours? 48 hours? Longer? No one knew.

Everyone packed up their things and said their goodbyes. By the time we left the Tweetup tent, we’d learned that the delay would be at least 48 hours. My flight home to Chicago was scheduled for the next morning, and the timing wouldn’t work for me to extend my stay in Florida. I headed back home hoping for a longer delay to allow me to come back for another shot at seeing a launch.

The launch date for STS-134 was rescheduled to Monday, May 16. Unfortunately, I was unable to go back to Florida to see the launch in person. Almost 80 of the original 150 Tweetup participants were able to make the trip though, and I followed along via Twitter as they trekked back to Florida.

Early in the morning of launch day, I started following tweets from the press site and could sense the excitement building. A group of tweeps made signs that said “No U-Turns” and “Launchpad ” to point the Astrovan in the right direction and avoid any more disappointing turnarounds.

No U-turns were made and space shuttle Endeavour lifted off on time at 8:56 a.m. EDT. Watching the launch on television was a little bittersweet. I wish I could have been there to see it in person and feel the vibration of launch from only three miles away. But I was also excited for all of my new Tweetup friends who were able to have such an amazing experience. Living vicariously through their tweets, pictures and videos made the launch special, even if I wasn’t there to witness it in person. 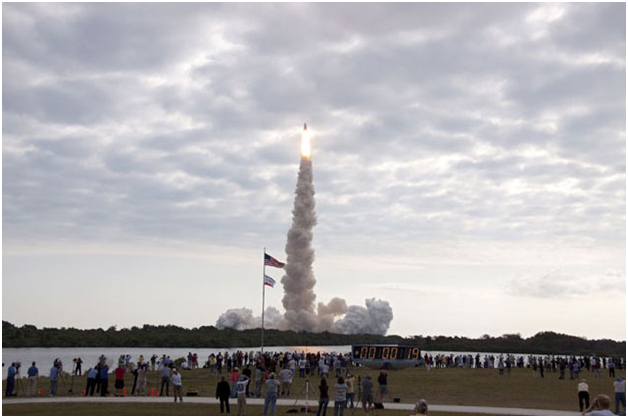 NASA Tweetup participantswatch from the press site as space shuttle
Endeavour and her crew head intospace.

Want to experience a space shuttle launch Tweetup for yourself? NASA recently announced that it will be holding a Tweetup event for the final space shuttle launch! Go on fun tours, hear from cutting-edge NASA researchers and astronauts, and watch from only three miles away as space shuttle Atlantis launches to space!

Registration will open at noon EDT on June 1, 2011, and will be open for 24 hours. Tweet your registration and keep an eye out for a confirmation email. 150 lucky participants will be selected!
For more information, visit  https://www.nasa.gov/connect/tweetup/tweetup_ksc_07-07-2011.html.