Today seems like an appropriate day to start reminiscing about the ol’ shuttle program, so here goes.

Sooner or later everybody is going to get to pick their favorite shuttle flight.

There is a lot to choose from; the boldest test flight in history (STS-1), launching the Hubble (STS-31), or servicing the Hubble (several flights), or assembling the space station (STS-88 and many more), or . . . well, you name it.

My favorite flight was STS-77.  This is partly personal, it was the first time I was Lead Flight Director, in charge of the planning and development for the flight as well as the actual execution.

Other than that personal reason, STS-77 may seem an odd choice for favorite flight, but after I tell you about it, you may change your mind.  On that flight we carried a double SpaceHab module with many science experiments on board.  Doing microgravity science on short term (approximately two weeks) shuttle flights is tough, but some good science was done by the crew.  But the other payloads that captured most of our interest and had the potential to yield the most significant results.

One experiment consisted of a small cylindrical sub satellite (shown in the following picture) which was covered by reflective material.  It was ejected from the shuttle payload bay early in the flight.  The cylinder also included a couple of permanent magnets.  The entire experiment consisted of using those magnets to align the satellite with the earth’s magnetic field; a very passive way to provide attitude control for small satellites.  The plan was to kick the satellite out, with a lot of wobble – clearly out of control, fly away for a day, come back, and observe how stable the satellite had become. 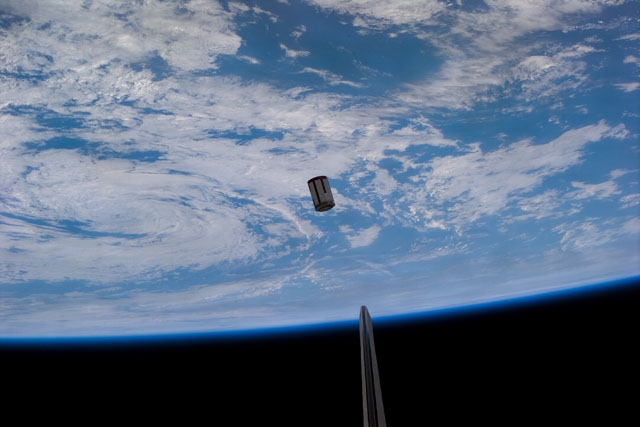 The shuttle rendezvoused with the satellite 24 hours later, and it was still wobbling all over the sky, so we went away.   We came back another 24 hours later, and it was still wobbling significantly, so we went away again.  We then waited 48 hours and came back and it was nearly stable, but not completely.  End of experiment.  Nice idea, came close to working, but took too long and never quite did what it was supposed to do.

Did I tell you that STS-77 still holds the record for the most number of rendezvous operations of any space flight?  The crew got really good at those procedures.

Even more impressive was the Inflatable Antenna Experiment (IAE).  The Spartan free flyer was originally designed to be a platform for astronomical experiments (one of the A’s in Spartan is for astronomy).  On this flight, a box with a tightly packaged balloon was mounted on the Spartan.  We put the Spartan/IAE out with the shuttle arm, let it go, flew a few hundred feet away, and watched the sequence.  The box was to pop open and pressurized gas at just a few psi would inflate a huge antenna.  If the antenna were stable and the geometry was right, we could have a new way of building light weight, inexpensive radio antennas in orbit.  What a great concept!  The Spartan had cold gas thrusters to maintain attitude control and would point this test antenna in a direction where we could observe whether or not it performed as expected. 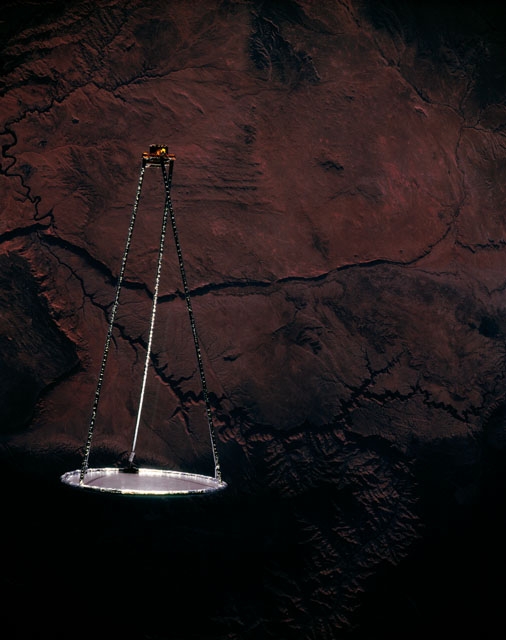 Things did not go as planned.

Rather than a straightforward inflation of the balloon, the antenna looked at first like an octopus with multiple entangling arms.  After several minutes it achieved a stable shape as we had expected, but the entire Spartan/IAE package was tumbling end over end.

Clearly the inflation had set up a motion that the Spartan’s attitude control system could not overcome.

Even worse, when the “lens” part of the antenna came clearly into view, the surface was not smooth but wrinkled and those wrinkles fluttered across the surface of the lens in constant motion.  This would not provide the smooth, stable surface necessary for radio transmission.

After observing at a close distance for the planned time; the shuttle crew backed off to a safe distance, the balloon was jettisoned, and the Spartan bus stabilized itself.

A day later the shuttle rendezvoused with the Spartan bus, grappled it with the arm,  and stowed the Spartan safely in the payload bay.

Did I mention that STS-77 still holds the record for the most number of rendezvous executed by any single space mission?

So here is the scorecard:  several of the SpaceHab science experiments provided interesting results.  The Passive Attitude Control sub-satellite using magnets and the earth’s magnetic field did not achieve the expected results.  The Inflatable Antenna Experiment was, in that configuration, a failure.  And of course, the record number of rendezvous!

So, what do we say about this flight?

Both of these showy free flying experiments were radical, even revolutionary ways of doing business in space.  They were bold in their conception and execution.  If successful, those technologies would have been “game-changing” to use a phrase in current vogue.  But they failed.  That happens sometimes when you test radical innovative technologies.  On the other hand, sometimes you actually succeed.  You always learn.  If we were to try those experiments again, with the knowledge of what didn’t work last time, they might just work.  The revolution may still be just out there.

I recently heard a radio program discussing what makes America so successful, how we have built such an innovative, creative society.  Part of the reason, it was stated, is that we are not afraid to try something and fail.  In fact, it expected that we will encounter failure. You cannot be innovative and not have failures.  Being paralyzed at the prospect of a potential failure is the greatest failure of all.

Try something.  Be bold, revolutionary, even game changing.  Just don’t be surprised if you have to pick yourself up off the ground and dust off your pants from time to time.  It’s the American way.