At NASA we fall under the Constitution; yet in 1789 nobody believed that flying to the moon or the planets would ever be possible.  Yet that controlling document says that the national government is to “promote the general Welfare”  and thus it allows the United States to pursue exploration of realms unimaginable two centuries ago.

Here are two short stories that are worth pondering if you want to understand America.

It quickly became fashionable that the July 4 celebration include speeches and other commemorations. At one particular event early in the 19th century a Federal District Court judge was the master of ceremonies.  The dignitaries on the platform included an old farmer who had fought at Concord on April 19, 1775,  “where the embattled farmers stood and fired the shot heard round the world.”

The judge called the old farmer to the podium and asked, “Were you fighting because of the tax on tea?”

Trying again, the judge asked, “Were you fighting because of the Stamp Act?”

“No” came the reply. The old man allowed that he had never seen any of those stamps.

Getting desperate, the judge said, “Well, you must have been reading Thomas Locke on the Rights of Man.”

“No” said the farmer; “Our only books were the Bible, Isaac Watt’s Psalms, and the Farmer’s Almanac.”

Flustered, the judge asked “Well then, tell us: why did you fight the redcoats that day?”

The old farmer replied: “As long as anybody could remember, we had been running our own affairs.  Those soldiers were coming down the road to take that away from us.”

The chief revolutionary was George Washington, “First in War, First in Peace, and First in the Hearts of his Countrymen.”  George is not the greatest writer America has produced.  Much of his writing is a tough read.  But read this passage from his Circular to the States written as the Continental army disbanded in 1783.  And think particularly about the very last sentence which I have emphasized.

The citizens of , placed in the most enviable condition, as the sole lords and proprietors of a vast tract of continent, comprehending all the various soils and climates of the world, and abounding with all the necessaries and conveniences of life, are now, by the late satisfactory pacification, acknowledged to be possessed of absolute freedom and independency.

They are, from this period, to be considered as the actors on a most conspicuous theatre, which seems to be peculiarly designated by for the display of human greatness and felicity.

Here they are not only surrounded with every thing, which can contribute to the completion of private and domestic enjoyment; but Heaven has crowned all its other blessings, by giving a fairer opportunity for political happiness, than any other nation has ever been favored with.


Nothing can illustrate these observations more forcibly, than as recollection of the happy conjuncture of times and circumstances, under which our republic assumed its rank among the nations.

The foundation of our empire was not laid in the gloomy age of ignorance and superstition; but at an epocha when the rights of mankind were better understood and more clearly defined, than at any former period.

The researches of the human mind after social happiness have been carried to a great extent; the treasures of knowledge, acquired by the labors of philosophers, sages, and legislators, through a long succession of years, are laid open for our use, and their collected wisdom may be happily applied in the establishment of our forms of government.

The free cultivation of letters, the unbounded extension of growing liberality of sentiment, and above all, the pure and benign light of Revelation, have had a meliorating influence on mankind and increased the blessings of society.

At this auspicious period, the came into existence as a nation; and, if their citizens should not be completely free and happy, the fault will be entirely their own.

Have a thoughtful Fourth of July.  Here is a picture I took outside the National Archives, the quotation is from Jefferson: 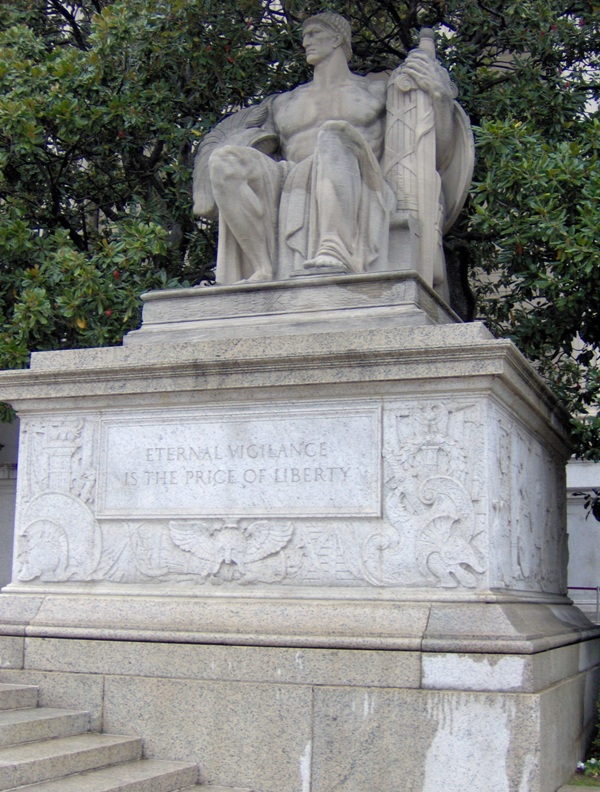