Last Sunday I got to sit with a respected retired NASA executive who just happens to be a Canadian transplant to the steamy gulf coast.   After the service was over we had a chat about his early experience with the Avro Arrow.  His brief assessment:  “Devastating at the time; but it was the best thing that ever happened to me personally.  It led to a marvelous career.”

That is something to think about in these times.

In case you are not familiar with the history, the A. V. Roe – Canada aircraft company 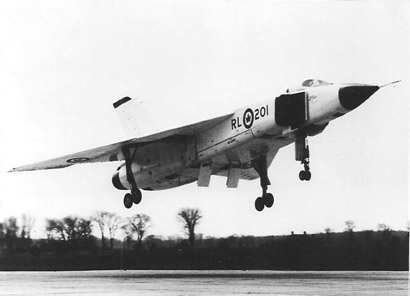 was a major designer and manufacturer of military aircraft in the Toronto, Ontario area during the cold war.  In the early 1950’s Avro began designing a groundbreaking advanced fighter/interceptor to deal with the Soviet bomber menace.  The Arrow, a delta winged supersonic aircraft, was cutting edge – perhaps the best design of its era.  As with many other advanced aircraft of the time, several years passed as the design team worked feverishly to overcome technical obstacles.  They also had to incorporate significant new requirements which were added late in the design process by the Canadian air force.  The prototype first flew in the same day Sputnik was launched, October 4, 1957.

Good technical progress was being made with several prototypes in flight test and final production design being firmed up when disaster struck.  A new Canadian government, for reasons that are too complex to discuss here, unexpectedly cancelled the Arrow program on February 20, 1959.  All prototypes, design documents, and production jigs were ordered destroyed to keep the advanced aerodynamic information from possibly falling into the hands of Soviet spies.  Within a few months, Avro laid off over 14,000 personnel.  It is estimated that an even larger number of vendors and parts suppliers were out of work due to the cancellation.

Some of the very best of the laid-off Avro engineers found work with a new agency of the US Government.  They went to work for the Space Task Group in Langley, Virginia.  The old timers and the history books tell us that these immigrants played an absolutely crucial role in the success of the Mercury, Gemini, and Apollo programs.  Their legacy in aerodynamics, engineering, management, and leadership still resonates in the agency.  The legacy of the Arrow can even be seen in the delta winged Space Shuttle.  They had “marvelous careers.”

Change is inevitable; life goes on.  Change moves us out of our comfort zones.  The question is not whether there will be change, but what will you do when change occurs?  Out of a personal disaster, how will you create a marvelous new career?  But remember, nothing great was ever accomplished by comfortable men.

For those who are hurting, this is thin comfort to be sure, but it’s that I can offer.