“The Webb telescope and science instruments are ready to enter the shade, never again to see direct sunlight. One of Webb’s unique design features is using passive cooling by a five-layer sunshield to reach the telescope’s operational temperatures of 45 Kelvin (-380 degrees Fahrenheit). The enormous sunshield is about 70 by 47 feet (21 by 14 meters) when deployed, or approximately the size of a tennis court. The sunshield geometry and size were determined such that the telescope can point within a field of regard that covers 40% of the sky at any time and can observe anywhere in the sky over six months. This innovative architecture enables Webb’s sensitivity to be limited by the natural sky background (mostly zodiacal light) rather than being compromised by thermal glow of the observatory itself, for all wavelengths shorter than 15 microns, for the duration of the mission.

“For launch, the sunshield was folded like a parachute and stowed onto the forward and aft unitized pallet structures (UPSs). Both the telescope and sunshield’s support structures are mechanically connected to each other and the spacecraft bus in order to fit within the Ariane 5’s fairing and withstand the dynamic launch environment. 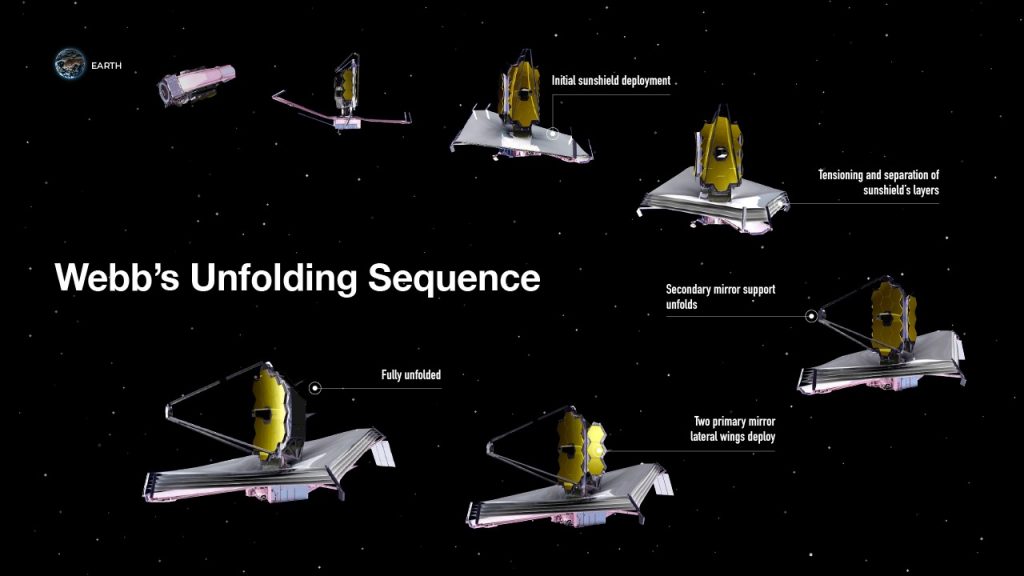 “There are 50 major deployments that transform Webb from its stowed, launch configuration into an operational observatory. The sunshield deployment sequence started with the forward, then aft, UPSs’ mechanical release from the telescope and motorized lowering into position. The telescope and science instruments, mounted on a deployable tower assembly, were then mechanically released and raised. There is a momentum flap attached to the end of the aft UPS that is released and positioned, whose function is to balance the solar pressure on the deployed sunshield. The sunshield covers are released via retraction of membrane release devices and roll out of the way, readying the system for the deployment of the sunshield layers. The telescopic mid-booms sequentially push out from the spacecraft bus perpendicular to the telescope line of sight, pulling the folded stack of sunshield layers out into the final, but still untensioned, configuration. Finally, each sunshield layer is tensioned into position, starting with the Sun-facing layer first and finishing with the telescope-facing layer. The deployed sunshield begins a rapid cooldown of the telescope and the science instruments, but on-board heaters within the science instruments will be used to control their cooldown and prevent contamination.

“While these steps have been tested on the ground and operationally rehearsed in the Mission Operations Center, these critical activities must be executed for a successful mission. Best wishes to our team, and stay cool, Webb!”