The ongoing success of the multi-instrument optics alignment for NASA’s Webb telescope’s near-infrared instruments has moved the attention of the commissioning team to chill as we carefully monitor the cooling of the Mid-InfraRed Instrument (MIRI) down to its final operating temperature of less than 7 kelvins (-447 degrees Fahrenheit, or -266 degrees Celsius). We are continuing other activities during this slow cooldown which include monitoring the near-infrared instruments. As MIRI cools, other major components of the observatory, such as the backplane and mirrors, also continue to cool and are approaching their operational temperatures.

Last week, the Webb team did a station-keeping thruster burn to maintain Webb’s position in orbit around the second Lagrange point. This was the second burn since Webb’s arrival at its final orbit in January; these burns will continue periodically throughout the lifetime of the mission.

In the last few weeks, we have been sharing some of Webb’s anticipated science, beginning with the study of the first stars and galaxies in the early universe. Today, we will see how Webb will peer within our own Milky Way galaxy at places where stars and planets form. Klaus Pontoppidan, the Space Telescope Science Institute project scientist for Webb, shares the cool science planned for star and planet formation with Webb:

“In the first year of science operations, we expect Webb to write entirely new chapters in the history of our origins – the formation of stars and planets. It is the study of star and planet formation with Webb that allows us to connect observations of mature exoplanets to their birth environments, and our solar system to its own origins. Webb’s infrared capabilities are ideal for revealing how stars and planets form for three reasons: Infrared light is great at seeing through obscuring dust, it picks up the heat signatures of young stars and planets, and it reveals the presence of important chemical compounds, such as water and organic chemistry.

“Let us look at each reason in more detail. We often hear that infrared light passes through obscuring dust, revealing newborn stars and planets that are still embedded in their parental clouds. In fact, mid-infrared light, as seen by MIRI, can pass through 20 times thicker clouds than visible light. Because young stars are formed quickly (by cosmic standards, anyway) – in as little as a few 100,000 years – their natal clouds have not had time to disperse, hiding what is going on in this critical stage from visible view. Webb’s infrared sensitivity allows us to understand what happens at these very first stages, as gas and dust are actively collapsing to form new stars. 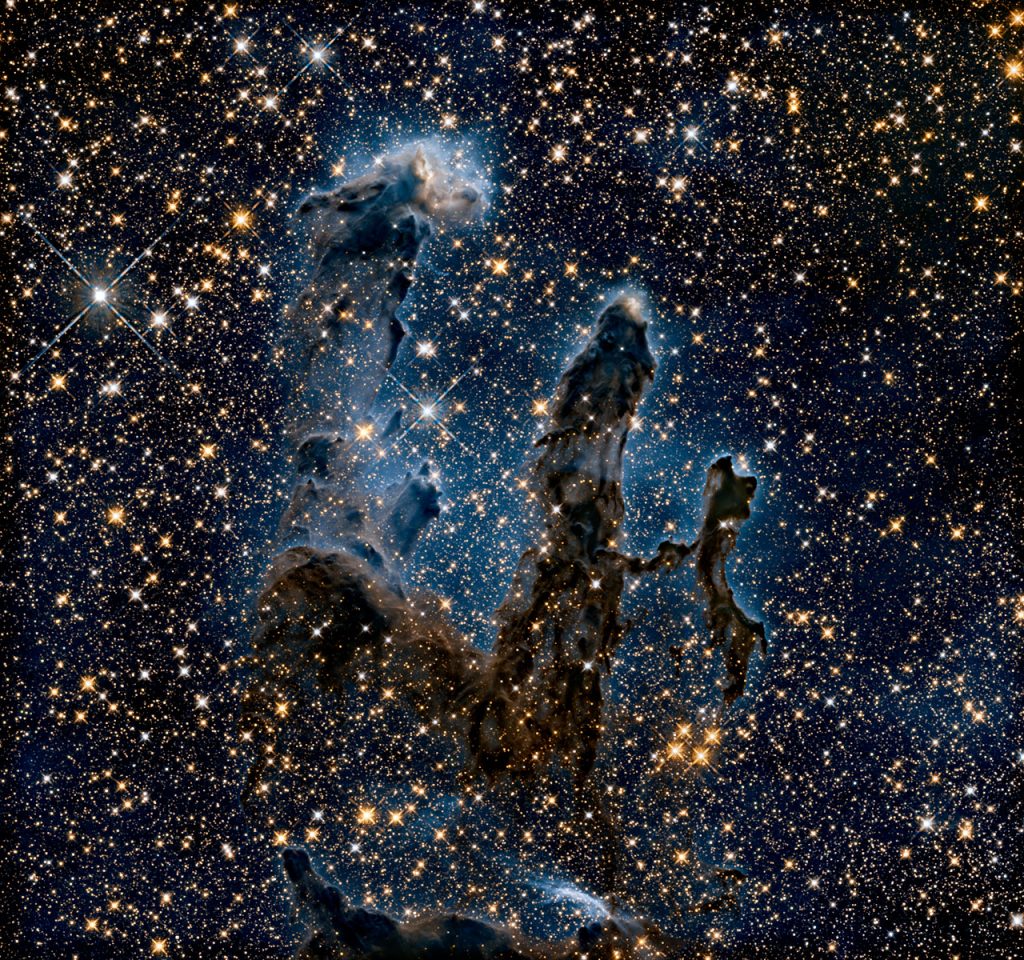 “The second reason has to do with the young stars and giant planets themselves. Both begin their lives as large, puffy structures that contract over time. While young stars tend to get hotter as they mature, and giant planets cool, both typically emit more light in the infrared than at visible wavelengths. That means that Webb is great at detecting new young stars and planets and can help us understand the physics of their earliest evolution. Previous infrared observatories, like the Spitzer Space Telescope, used similar techniques for the nearest star-forming clusters, but Webb will discover new young stars across the galaxy, the Magellanic Clouds, and beyond.

“Finally, the infrared range (sometimes called the “molecular fingerprint region”) is ideal for identifying the presence of a range of chemicals, in particular water and various organics. All four of Webb’s science instruments can detect various important molecules using their spectroscopic modes. They are particularly sensitive to molecular ices present in cold molecular clouds before stars are formed, and NIRCam and NIRSpec will, for the first time, comprehensively map the spatial distribution of ices to help us understand their chemistry. MIRI will also observe warm molecular gas near many young stars where rocky, potentially habitable planets may be forming. These observations will be sensitive to most bulk molecules and will allow us to develop a chemical census at the earliest stages of planet formation. It is no surprise that a significant number of Webb’s early scientific investigations aim to measure how planetary systems build the molecules that may be important for the emergence of life as we know it.

“We will be keeping a close eye on MIRI as it cools down. As the only mid-infrared instrument on Webb, MIRI will be particularly important for understanding the origins of stars and planets.”