Webb’s iconic primary mirror is taking its final shape. Today, the first of two primary mirror wings, or side panels, was deployed and latched successfully. Each side panel holds three primary mirror segments that were engineered to fold back to reduce Webb’s overall profile for flight.

The process of deploying the port side mirror wing began at approximately 8:36 a.m. EST. At approximately 2:11 p.m. EST, engineers confirmed that the panel was fully secured and locked into place, and the deployment was complete.

Now that the port side wing panel is locked in place, ground teams will prepare to deploy and latch the starboard (right side) panel tomorrow. Upon completion, Webb will have concluded its major deployment sequence.

Engineers have begun the final stage of Webb’s major structural deployments: the unfolding of its two primary mirror wings. These side panels, which were folded back for launch, each hold three of the observatory’s 18 hexagonal, gold-coated mirror segments.

The team is beginning today with the mirror wing on the port (left) side of the observatory. Engineers must first release mechanisms that held the wing in place for launch, in order to allow the wing to deploy. The panel then rotates into position, a motor-driven process that takes about five minutes. Once the wing is extended, engineers begin a meticulous, two-hour process to securely latch it into place.

The deployment of the second primary mirror wing, planned for tomorrow, will follow the same process.

As NASA’s James Webb Space Telescope makes its way out to its intended orbit, ground teams monitor its vitals using a comprehensive set of sensors located throughout the entire spacecraft. Mechanical, thermal, and electrical sensors provide a wide array of critical information on the current state and performance of Webb while it is in space.

A system of surveillance cameras to watch deployments was considered for inclusion in Webb’s toolkit of diagnostics and was studied in-depth during Webb’s design phase, but ultimately this was rejected.

“Adding cameras to watch an unprecedently complicated deployment of such a precious spacecraft as Webb sounds like a no-brainer, but in Webb’s case, there’s much more to it than meets the eye,” said Paul Geithner, deputy project manager – technical for the Webb telescope at NASA’s Goddard Space Flight Center. “It’s not as straightforward as adding a doorbell cam or even a rocket cam.”

First of all, Webb is big, undergoes many configuration changes during deployment, and has many specific locations of import to deployment. Monitoring Webb’s deployments with cameras would require either multiple narrow-field cameras, adding significant complexity, or a few wide-field cameras that would yield little in the way of helpful detailed information. Wiring harnesses for cameras would have to cross moving interfaces around the observatory and add more risk of vibrations and heat leaking through, presenting a particular challenge for cameras located on the cold side of Webb.

Then there’s the issue of lighting. Webb is very shiny, so visible cameras on the Sun-facing side would be subject to extreme glare and contrast issues, while ones on the cold, shaded side would need added lighting. Although infrared or thermal-imaging cameras on the cold side could obviate the need for illumination, they would still present the same harnessing disadvantages. Furthermore, cameras on the cold side would have to work at very cold cryogenic temperatures. This would either require ‘ordinary’ cameras to be encapsulated or insulated so they would work in extreme cold, or development of special-purpose cryogenic-compatible cameras just for deployment surveillance.

Notwithstanding these challenges, engineers mocked up and tested some camera schemes on full-scale mockups of Webb hardware. However, they found that deployment surveillance cameras would not add significant information of value for engineering teams commanding the spacecraft from the ground.

“Webb’s built-in sense of ‘touch’ (for example, switches and various mechanical, electrical, and temperature sensors) provides much more useful information than mere surveillance cameras can,” said Geithner. “We instrumented Webb like we do many other one-of-a-kind spacecraft, to provide all the specific information necessary to inform engineers on Earth about the observatory’s health and status during all activities.” Engineers can also correlate years of data from ground testing with telemetry data from flight sensors to insightfully interpret and understand flight sensor data.

At about 8:48 a.m. EST, a specialized radiator assembly necessary for Webb’s science instruments to reach their required low and stable operating temperatures deployed successfully. The Aft Deployable Instrument Radiator, or ADIR, is a large, rectangular, 4 by 8-foot panel, consisting of high-purity aluminum subpanels covered in painted honeycomb cells to create an ultra-black surface. The ADIR, which swings away from the backside of the telescope like a trap door on hinges, is connected to the instruments via flexible straps made of high-purity aluminum foil. The radiator draws heat out of the instruments and dumps it overboard to the extreme cold background of deep space.

The deployment of the ADIR – a process that released a lock to allow the panel to spring into position – took about 15 minutes.

Today, Webb teams successfully deployed the observatory’s secondary mirror support structure. When light from the distant universe hits Webb’s iconic 18 gold primary mirrors, it will reflect off and hit the smaller, 2.4-foot (.74-meter) secondary mirror, which will direct the light into its instruments. The secondary mirror is supported by three lightweight deployable struts that are each almost 25 feet long and are designed to withstand the space environment. Specialized heating systems were used to warm up the joints and motors needed for seamless operation.

“Another banner day for JWST,” said Bill Ochs, Webb project manager at NASA’s Goddard Space Flight Center, as he congratulated the secondary mirror deployment team at the Mission Operations Center in Baltimore. “This is unbelievable…We’re about 600,000 miles from Earth, and we actually have a telescope.”

The deployment process began at approximately 9:52 a.m. EST, and the secondary mirror finished moving into its extended position at about 11:28 a.m. EST. The secondary mirror support structure was then latched at about 11:51 a.m. EST. At approximately 12:23 p.m. EST, engineers confirmed that the structure was fully secured and locked into place and the deployment was complete.

“The world’s most sophisticated tripod has deployed,” said Lee Feinberg, optical telescope element manager for Webb at Goddard. “That’s really the way one can think of it. Webb’s secondary mirror had to deploy in microgravity, and in extremely cold temperatures, and it ultimately had to work the first time without error. It also had to deploy, position, and lock itself into place to a tolerance of about one and a half millimeters, and then it has to stay extremely stable while the telescope points to different places in the sky – and that’s all for a secondary mirror support structure that is over 7 meters in length.”

Next Webb will deploy an important radiator system known as the aft deployable instrument radiator (ADIR), which helps shed heat away from its instruments and mirrors. Learn more about Webb’s deployment timeline online. 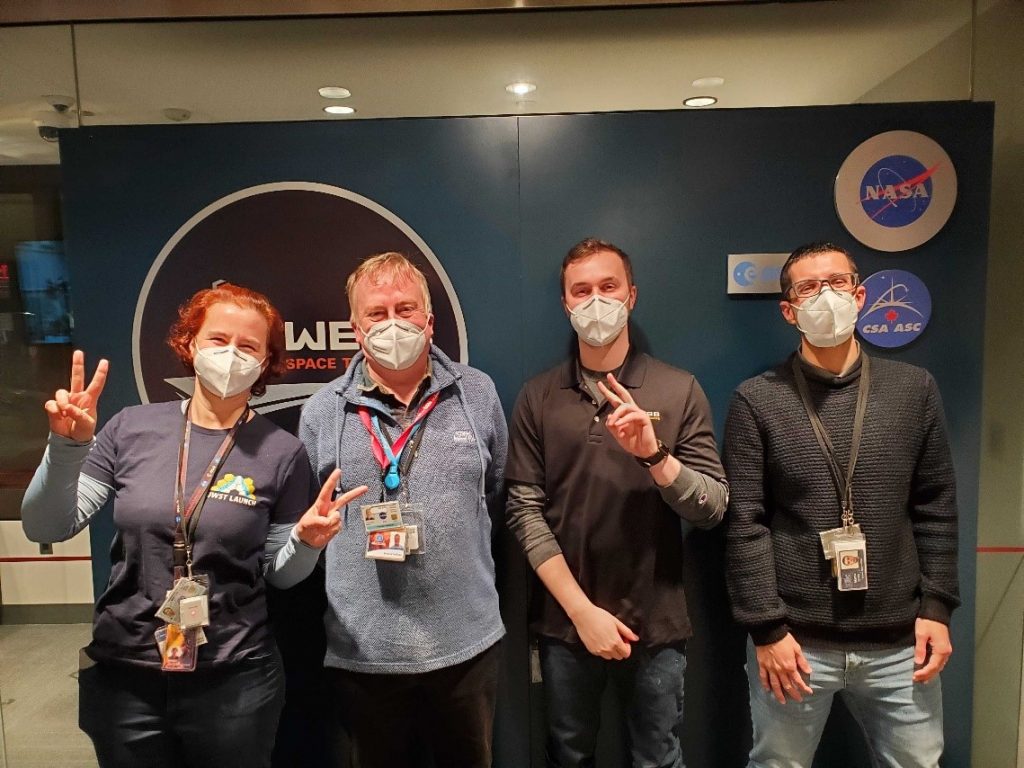 As expected, the Webb original deployments timeline has changed over time. Sunshield tensioning was completed today, on the 10th day after launch. The secondary mirror deployment is now planned for tomorrow morning.
Live coverage of the deployment, from the Webb Mission Operations Center at the Space Telescope Science Institute in Baltimore, Maryland, will stream on nasa.gov/live starting at approximately 9:45 a.m. EST (subject to change based on Webb’s operations).

At approximately 11:59 am EST, the fifth and final layer of Webb’s sunshield was fully tensioned, marking the completion of sunshield deployment. Read more about this key milestone in preparing Webb for science operations.

With three layers of Webb’s sunshield fully deployed, the team commenced tensioning – that is, pulling each layer fully taut – of the final two layers this morning.

We will have live coverage of the fifth layer tensioning at nasa.gov/live beginning at about 9:30 am EST.

The Webb team has completed tensioning for the first three layers of the observatory’s kite-shaped sunshield, 47 feet across and 70 feet long.

The first layer – pulled fully taut into its final configuration – was completed mid-afternoon.

These three layers are the ones closest to the Sun. Tensioning of the final two layers is planned for tomorrow.

“The membrane tensioning phase of sunshield deployment is especially challenging because there are complex interactions between the structures, the tensioning mechanisms, the cables and the membranes,” said James Cooper, NASA’s Webb sunshield manager, based at Goddard Space Flight Center. “This was the hardest part to test on the ground, so it feels awesome to have everything go so well today. The Northrop and NASA team is doing great work, and we look forward to tensioning the remaining layers.”