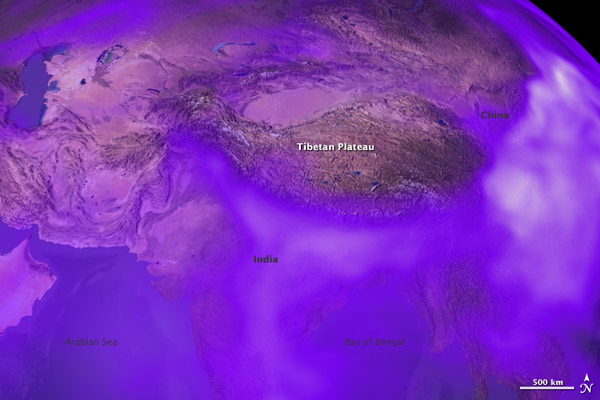 A image from a simulation that shows the spread of black carbon aerosols in Asia. Areas where the air was thick with
the pollution particles are white, while lower concentrations are transparent purple. (Credit: Earth Observatory)

Yet pinning down precisely how much the black carbon exacerbates warming is no easy task, research conducted by Goddard Institute for Space Studies climatologist Dorothy Koch suggests. The study, published in Atmospheric Chemistry and Physics tracked how the predictions from 17 global black carbon models compared with actual measurements collected by airplane, satellite, and ground-based sensors. It shows, among other things, that models generally underestimate black carbon’s warming effect on climate.

Koch tested all the models in three ways. In the simplest of the three, she compared the models’ predictions to the amount of black carbon measured at the surface, finding that they matched real life reasonably well.

Her second test compared the models’ predictions to black carbon measurements made higher in the atmosphere using airplanes, and the results were much less clear cut. Though the models usually had too much black carbon over pollution sources, most had too little over remote regions such as the Arctic.

Koch’s final and most important test looked at how much solar radiation black carbon actually absorbs, an indicator of the amount of warming the particles actually produce. Again, the results were mixed. The models were largely accurate over North America and Europe, but were not for areas that have high levels of black carbon such as Central Africa, Southeast Asia, and the Amazon.

In a write-up on the Goddard Institute for Space Studies web site, Koch summarizes her findings this way:

We concluded from this study that most models have enough black carbon at ground level in polluted regions, too much in the atmosphere above source regions, but not enough in the Arctic where black carbon may play an important role in contributing to Arctic warming and ice/snow melt. The models’ soot generally does not absorb enough sunlight and therefore these models would underestimate black carbon heating effects. This probably results from underestimating the absorbing properties of the particles rather than the amount (mass) of black carbon.

Wondering how climate modelers can continue to close the gap between model predictions and reality? Koch put forward some advice on how to fine-tune the next generation of aerosols models. Her top three:

1) Account for mixing between black carbon and other components of the atmosphere,
2) Incorporate better measurements of particle size and source amount in some regions.
3) Continue to mine ongoing satellite and field campaigns for data about black carbon.

9 thoughts on “How Do Global Soot Models Measure Up?”