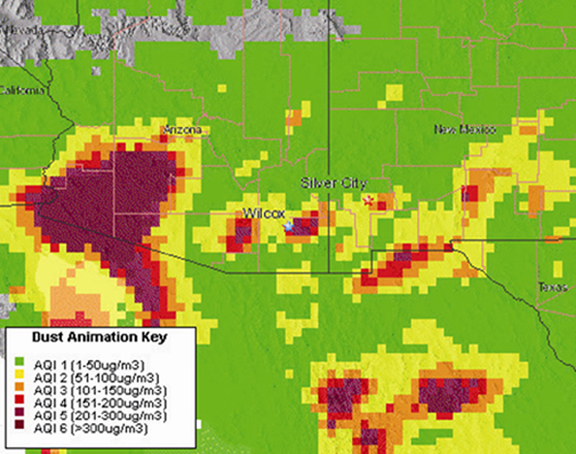 An animation from Morain’s Center, viewable online by local residents, captured a storm crossing southeast Arizona and southwest New Mexico on Jan. 6-8, 2008. This clip, part of a 48-hour dust forecast, centers on the hour of peak dust concentration in the towns of Wilcox and Silver City. Credit: Morain/Earth Data Analysis Center

Stanley Morain is not an asthmatic. But like a lot of other healthy people, his lungs are sensitive to dust in the air in his hometown of Albuquerque. Dust makes him cough. It makes his eyes tear. It makes him pretty miserable.

Morain believed that if he — a healthy individual — is affected by the dust storms common to the American southwest, then hundreds of thousands of asthmatics must be affected far more severely when millions of tiny particles nestle into their respiratory systems.

His career has led him to a spot as director of the Earth Data Analysis Center at the University of New Mexico, where he has encouraged his colleagues and students to follow their hearts in the projects they pursue. He’s set the example by spending 10 years using NASA satellite data to create daily dust forecasts to improve health alerts.

I caught up with Morain a few days before he left for the American Meteorological Society’s annual meeting, where he gave a talk Tuesday about his work. He’s especially excited about decisions by the United Nations and the Joint Board of Geospatial Information Societies to publish his latest dust modeling work this spring.

WhatOnEarth: How did you decide to focus your career on using satellite sensors to improve public health?

Morain: The thought first struck me years ago, before I got my doctorate in biogeography and before I was awarded my first NASA research grant in 1964. I’ve always been fascinated by the geographic aspects of health even when I worked on NASA projects as dissimilar as lunar landers in the 1960s. I found we could combine information technology and modeling to learn more about health problems like heart attacks, Valley Fever, and hantavirus pulmonary syndrome that frequently strikes and kills young, otherwise healthy people within 24 hours.

WhatOnEarth: The Centers for Disease Control estimate 16.4 million adults and 7 million children in the U.S. suffer from asthma. How do your dust alerts help them?

Morain: Well, we’re not yet operational on a large-scale basis. That would take a commercial firm stepping in to make our alerts available nationwide. But, in my own backyard, the alerts are helping asthmatics plan for the worst days. Dust is a real problem here. When people know dust is headed their way, they can adapt their plans to minimize time outdoors or increase the dosage of some asthma medications. We’re making the alerts available, by way of summaries of dust and air quality conditions, to everyone from school nurses to TV news broadcasters to epidemiologists who are concerned about how long-term dust exposure affects the overall population.

WhatOnEarth: How do NASA satellites play into the development of the alerts?

Morain: There are environmental triggers for diseases like asthma. Very fine pollutant particles called aerosols are key examples of such triggers. NASA satellites like Terra and Aqua have instruments that can “see” the path dust takes. When you merge dust modeling information from the satellites with the National Weather Service weather forecasting model, you get a product that tells you when a weather event will bring dust along with it. The product becomes the basis for our daily dust alerts.

2 thoughts on “Can Something Out in Space be Good for Your Health on Earth?”