There’s a sign on the door of the room I share with Sharmila Pal and Emily Peacock. It’s a green square of plastic engraved with a picture of a polar bear and the words “SCIENCE – LATE SLEEPER.” So many of the scientists aboard Coast Guard Cutter Healy for the ICESCAPE mission are awake through the night that the ship’s engraver, Chief Warrant Officer 3 Sean Lyons, has turned out a special  edition of late sleeper signs, complete with a rocket ship for NASA. Almost every door boasts a sleeper sign of one kind or another.

The reason? Aboard ICESCAPE, the science goes on 24 hours a day. We’re on a path to the far north, steaming from station to station through the night. Sometimes we’re in ice, sometimes we’re in open ocean, sometimes there’s a mix. Sometimes, there are walruses and seals. Each group of scientists has divided their schedule into shifts, so while some are catching their zzz’s behind those “late sleeper” signs, others are awake and overseeing operations, making measurements, and processing samples.

NASA’s Stanford Hooker takes the small boat out to measure light and take water samples, away from the interference of the ship. Karen Frey’s group from Clark University works on ice stations and takes Van Veen grabs in the open sea. (It’s like a giant pooper-scooper that scoops sediment from the ocean floor).

Bob Pickart of the Woods Hole Oceanographic Institution works to assess currents and other elements of physical oceanography, such as eddies and upwelling, as we pass through the ocean. James Swift, from Scripps Institution of Oceanography, oversees the CTD, a rosette of siphons and bottles triggered to sample water at various depths. (CTD stands for conductivity, temperature, and depth.) Greg Mitchell, Rick Reynolds, and their groups from Scripps measure the ocean’s optical properties with a small profiler dropped from the bow and with the Inherent Optical Properties (IOP) package of instruments deployed from the stern. 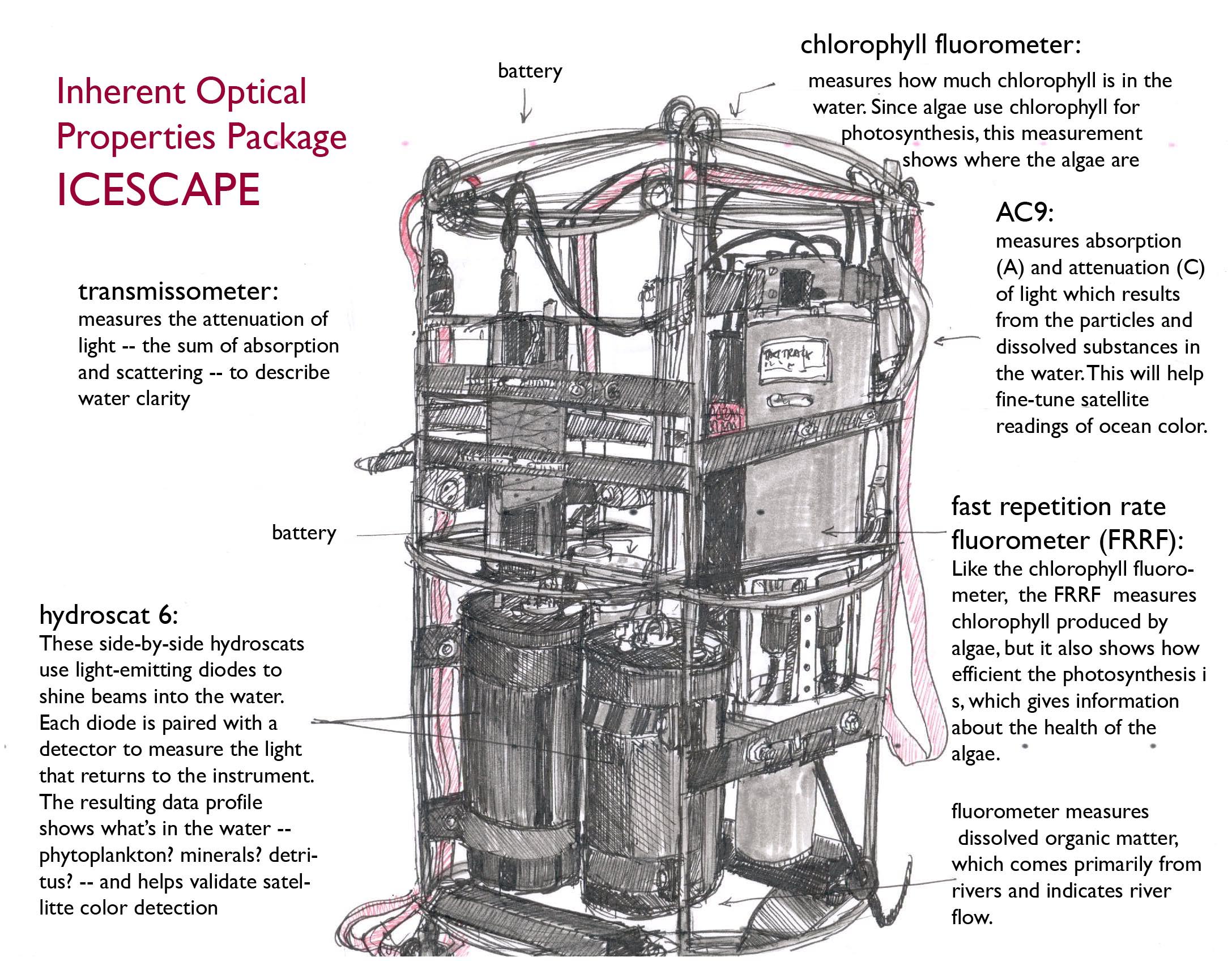 “We’re all working on different pieces of the same puzzle,” Reynolds says. “It’s impossible for one group to measure all we need to know. [Chief Scientist] Kevin Arrigo’s group is looking at core pigments, the plant pigments in the water column. Others are looking at chemical analyses of the nutrients in the water. It’s a big team effort. The ice people are working in a completely different environment, but there are algae in both places.”

The $250,000 IOP suite of instruments assesses the health of the ocean by analyzing the absorption and scattering of light by particles suspended in the water, including chlorophyll-rich algae; the quantity and quality of algae (the health and growth rate); and the presence of minerals and 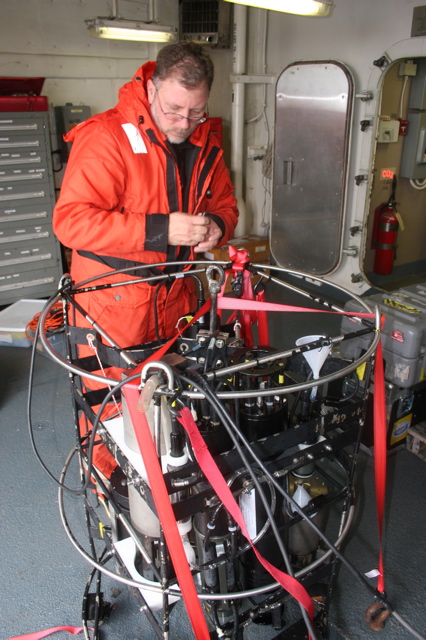 sediment. Each instrument on the IOP contributes to a picture of the makeup of the particles by assessing changes in light transmission.

“We start at the top,” says Reynolds (shown at left). “We look at what the NASAsatellite sees — the sea color — and parse out the differentcharacteristics of the water — how much algae, and what else is there,such as minerals from rivers, re-suspended sediment (mud stirred intothe water) and melting ice.” The resulting data will help thescientists develop new algorithms — equations for solving problems –to support the satellites.

NASA ice- and ocean-observing satellites, now working for more than ten years, are beginning to allow us to examine changes in the climate. One purpose of ICESCAPE is to look at the ocean with greater detail than the satellites offer, in order to improve and refine the interpretation of the satellite data.

“We’re here because NASA wants to know what the satellites are seeing right here at the stations,” says Reynolds, “where nobody else may sample for decades, because the ocean is so vast.”

All imagery, including the IOP sketch, courtesy of Karen Romano Young

One thought on “Puzzling Over the Pieces”