Charles Kironji Gatebe’s early years read like a cliché. He grew up barefoot and poor in the small Kenyan village of Kenda at the foot of Mount Kenya, the son of coffee sharecroppers who raised their family on pennies a day. He walked nearly 10 miles each way to school for nearly a decade. He lacked adequate texts and other school supplies.

What he didn’t lack on those long daily walks was clean air. It was the contrast between the clear skies of his boyhood home and the smog and fumes of the nation’s capital, Nairobi, that stirred within Gatebe a strong passion for science. In 1979, Gatebe (right) was selected to represent his elementary school at a national convention to celebrate the United Nations Educational, Scientific and Cultural Organization’s (UNESCO) International Year of the Child. He later won a physics prize in high school in 1984 from the Kenya Secondary Schools Science Congress. He enjoyed independent research so much that his physics teacher would allow him to conduct his own experiments in the lab alone at night or on weekends.

Gatebe’s passion, matched with natural aptitude, eventually led Gatebe to degrees from Kenya’s University of Nairobi and the University of the Witwatersrand in South Africa. Now a climatologist with a joint appointment at NASA’s Goddard Space Flight Center and the University of Maryland-Baltimore County, Gatebe has fashioned an award-winning career – including the rare honor of the World Meteorological Organization’s Young Scientist Award in 2000, and awards from the Kenyan government, German Academic Exchange Services, SysTem for Analysis, Research and Training (START), and the International Program in the Physical Sciences — for his innovative research on air pollution and its sources and effects on his country.

“Air quality in Kenya’s villages was and continues to be significantly different from the smog encountered in Nairobi. They vary so much that it seems you’re virtually in two distinct countries,” said Gatebe when asked to share what sparked his study of Kenya’s air pollution. During his graduate studies at the University of Nairobi, he devised a few climate projects that unexpectedly got the attention of the Kenyan government and United Nations Environment Program. One of those was a modeling experiment to measure vehicle pollution and predict pollution levels from the average speed and number of cars in use.

Gatebe also investigated the origins of the city’s air pollution; that is, how much Nairobi’s citizens and industry generated compared to what was transported in from other countries. “Charles’ Kenyan air quality research was quite breathtaking and significant,” said Michael King, a senior atmospheric scientist at the University of Colorado and former senior project scientist at NASA Goddard who recruited Gatebe to NASA in 1999. “It involved him regularly hiking to the top of Mount Kenya – which sits roughly on the equator — and collecting air samples of atmospheric aerosol particles that he analyzed for their composition to distinguish dust and other particles from local sources from pollutants arriving from as far away as southern Africa, India and the Sahara.”

The acclaim from the study came as a surprise, Gatebe says, but motivated him to stay the course. 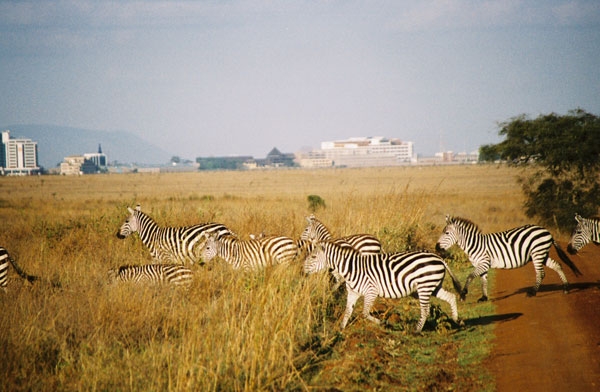 He knew he’d found his niche.

As a former child scientist, Gatebe is eager to inspire more kids to get involved in science. He’s dedicated himself to NASA’s Global Learning and Observations to Benefit the Environment (GLOBE) education program, and blogs about the science of current events for GLOBE’s Web site.

Gatebe’s latest work is based on what he calls an accidental discovery, not uncommon in science. In summer of 2008, he was part of a NASA field mission called Arctic Research of the Composition of the Troposphere from Aircraft and Satellites (ARCTAS). Arctic wind currents can carry a haze that affects local climate. Gatebe and colleagues flew aboard planes through smoke blown over the Pacific Ocean from land-based fires to evaluate the composition of the pollution that eventually forms Arctic haze.

A ship passed beneath Gatebe’s plane, through his measurement field, triggering a mass of sea foam in its wake. When he later evaluated visible and near-infrared data from NASA’s Cloud Absorption Radiometer instrument that took the measurements from aboard the plane, he noticed a spike in brightness in the vicinity of the ship’s path. The bubbles in the wake increased light reflectance off the ocean.

The irony of the discovery was quite amazing to Gatebe. Ships were long thought to pollute the air and contribute to warmer climate through exhaust emissions. But they also appear to have a counterbalancing effect of cooling local ocean surfaces by as much as four percent. What he doesn’t know yet is just how much the cooling effect offsets the warming effect on the nearby environment. He hopes that others will further the work so the question doesn’t go unanswered.