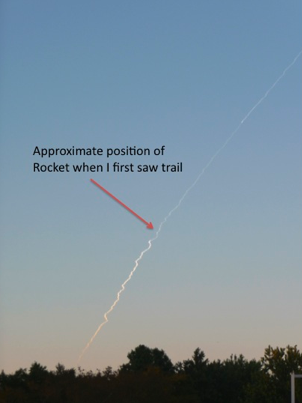 Recently, a colleague and I caught a glimpse of an odd-looking contrail stretching across the sky. As we stood there and studied it, my colleague made in interesting observation.

“That’s the trail from a rocket launch,” he said. He was referring to a launch from NASA’s Wallops Flight Facility, which is about 70 miles northeast of our location at NASA Langley in Hampton, Va.

A contrail is formed when hot, humid air from exhaust mixes with cold, dryer air at high altitudes. The condensation trail forms a cloud that shows the passage of the aircraft (or, in this case, a spacecraft). Contrails can change and move easily, and by studying them we can determine how they affect Earth’s energy budget.

It can be hard to read the sky correctly because the curvature of the Earth produces some confusing optical effects. In this case, our ground perspective about 70 miles from the launch made the trail appear at first as a regular contrail crossing the sky horizontally.

But as I continued to watch, it became clear that this was no ordinary contrail. Rather than continuing across the sky, the trail clearly became higher and higher until it vanished entirely as the rocket left the bulk of the atmosphere behind.

Aside from that high arc, this trail had some other odd features. Unlike a typical contrail, which is usually pretty smooth, this one looked narrow and wiggly. Those wiggles, I discovered, were the result of adjustments in the pointing of the rocket as it zoomed through the atmosphere. This is apparent in the video of the launch. 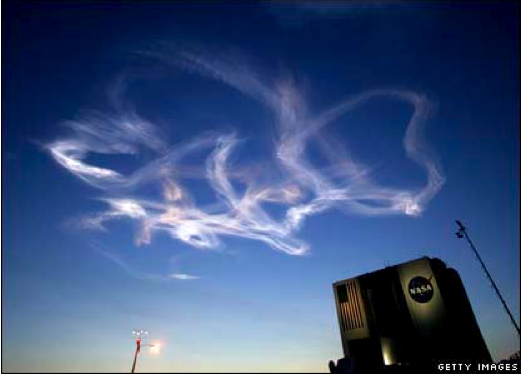 The winds were relatively light that evening, so about 45 minutes later the trail was still clearly visible overhead. However, there was just enough wind to twist the contrail into something that could have been left behind by a crazed aerobatic pilot.

I searched the web and found the picture on the left from a Shuttle launch, which gives you some idea of what we saw.

From my point of view on the ground, there was nothing to tell me that those loops weren’t a horizontal set of circles made by a plane flying at a constant altitude. But since I knew that a rocket had left the trail, I could correctly interpret them as a spiral up to higher levels of the atmosphere.

While this experience is an extreme example, it points out the perspective problems at work whenever we look up at the sky.

Nonetheless, our Earthly perspective is valuable to learning more about clouds’ behavior, and with the help of satellites, we can get a little closer to understanding how clouds affect our climate system.

One thought on “Reading the Sky”