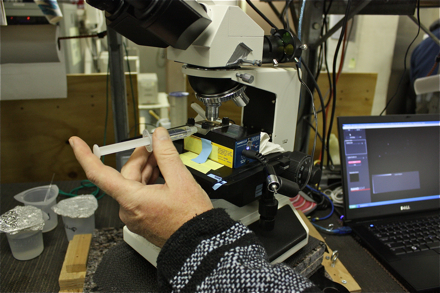 Last week, we asked you to identify the flecks in a video posted to What on Earth is That #2, and we received all sorts of replies. The correct answer?

They may look like twinkling stars, but the shimmering flecks in this video are actually some of the tiniest particles in the ocean. This clip shows a complex mixture of the miniscule particles, both organic (living) and inorganic (nonliving) types. The large, fern-shaped specimen on the lower right is a type of phytoplankton. Some of the other flecks are likely bacteria and viruses.

Did you notice the slight vibrating motion that makes all the specks look like they’re flickering? That’s caused by random collisions with atoms, a phenomenon called “Brownian motion.” By measuring the distance each particle is pushed around, it’s even possible to infer particle size, which is important for understanding how the particles scatter sunlight in the ocean and for interpreting what ocean-observing satellites “see.”

Image and video Information: This sample was pulled from the Arctic’s Chukchi Sea on June 29, 2010, as part of NASA’s ICESCAPE mission. Kuba Tatarkiewicz, of the Scripps Institution of Oceanography, captured the action with a NanoSight instrument — a camera, microscope and viewing unit that the team adapted for use during the ICESCAPE oceanographic voyage.