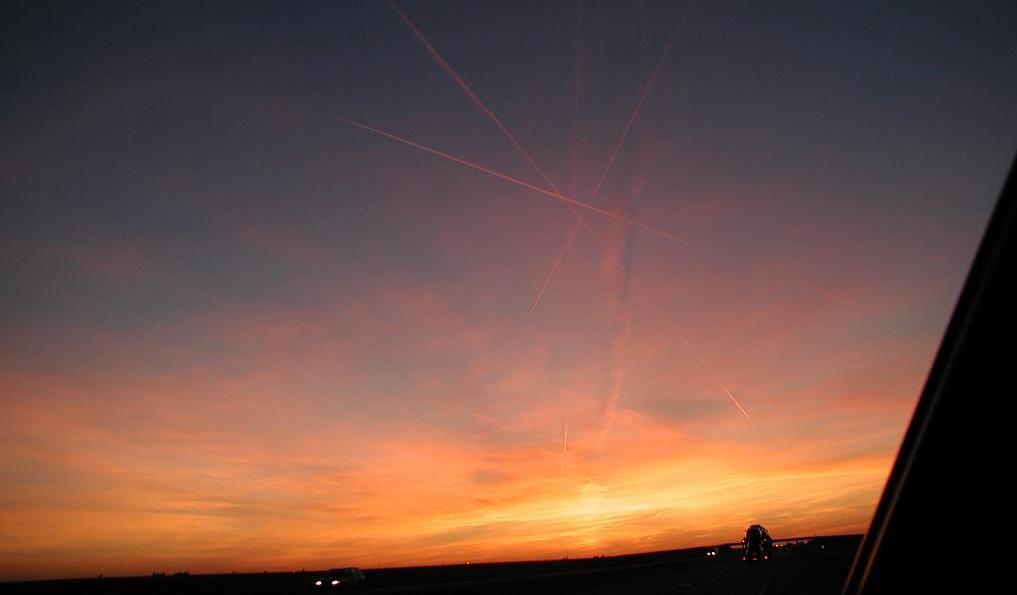 The prospect of a renegade missile transfixed newscasters last week after a videographer captured imagery of an unusual contrail near the coast of California. The now notorious plume initially baffled commentators as it seemed to point vertically into space and appeared larger than a standard airplane contrail.

The reality, which trickled out in the days following the uproar, turned out to be far less dramatic than some of the more inventive theories circulating. Most experts now say the mysterious plume was the product of a jet. The time of day and the particular trajectory of the jet conspired to create the illusion.

Sure, it might seem like a letdown, but here at What on Earth we would argue that jet contrails are perfectly fascinating in their own right. Where on Earth do they come from? The cirrus-cloud like condensation trails form when water vapor condenses and freezes around tiny airborne particles called aerosols that spill from jet engines.

NASA Langley Research Center, in Hampton, Va., hosts a thorough website that’s well-worth a look for those who happen to be contrail-curious. Langley points out, for example, that contrails are hardly monolithic, noting that there are actually three major varieties of contrails: short-lived, persistent, and persistent spreading.  Here’s how Langley describes the three types:

Short-lived contrails look like short white lines following along behind the plane, disappearing almost as fast as the airplane goes across the sky, perhaps lasting only a few minutes or less. The air that the airplane is passing through is somewhat moist, and there is only a small amount of water vapor available to form a contrail. The ice particles that do form quickly return again to a vapor state.

Persistent contrails also play a role in climate because they reflect sunlight and trap infrared radiation just like their naturally formed cousins.  Thus, the presence of a contrail cluster in an otherwise clear sky can diminish the amount of solar energy reaching the surface during the daytime and increase the amount of infrared radiation absorbed in the atmosphere at all times of day. Currently, the overall impact appears to be a warming effect, but research is continuing to unravel the role of this phenomenon in climate change.

Another interesting tidbit from Our Changing Planet:

Persistent contrails can often grow into natural-looking cirrus clouds within a few hours, a phenomenon that is best observed from space.  Although they typically last for only 4-6 hours, some clusters have been observed to last more than 14 hours and travel thousands of kilometers before dissipating. These persistent contrails are estimated to have caused cirrus cloud cover to rise by three percent between 1971 and 1996 over the United States and are well-correlated with rising temperatures, though not the only cause of them. Increasing traffic in nearly every country of the world will cause a rise in global cirrus coverage unless the upper troposphere dries out or advances in air traffic management and weather forecasting or in aircraft propulsion systems can be used to minimized contrail formation.

Indeed. Take a look at this mesmerizing data visualization of just a mere day of air traffic…

Photo above of contrails in a star pattern by John Pertig, courtesy of NASA Langley Research Center.

2 thoughts on “Speaking of Contrails…”