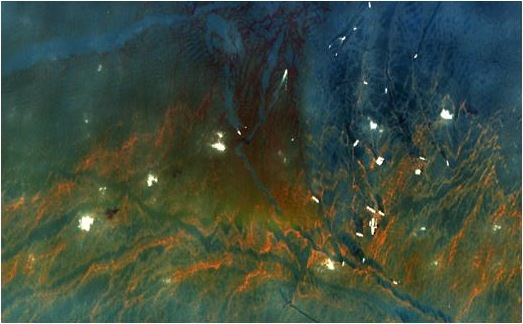 Some 25 billion tweets were sent in 2010, and surprisingly Lady Gaga didn’t dominate the list.  Instead, it was the summer’s Deepwater Horizon oil spill that inspired the most activity, according to data released by Twitter this week.

Meanwhile, six months after the spill, and long after media and twitter chatter about it has subsided, scientists continue to parse out the details of the unprecedented event. I spent the afternoon yesterday in a session at AGU that highlighted the incredible array of resources the scientific community flung at the problem.

NASA is known best for its satellites (in this case, the iconic imagery of the spill captured by the MODIS instruments). Yet, as we’ve pointed out on this blog before, satellites aren’t the only tool that NASA’s earth scientists have at their disposal. In the midst of the oil spill crisis, NASA scrambled a number of aircraft bearing instruments that have a played key roles in sorting out the dynamics of the spill.

During the AGU session, Michael Freilich, director of NASA’s earth science division, emphasized the novel contributions of an airborne instrument called the Airborne Visible/Infrared Imaging Spectrometer (AVIRIS), a spectrometer that flew aboard the ER-2, a civilian version of the famous U-2 spy planes, and the Twin Otter, a much smaller propeller plan that flies at a lower altitude.

Flights were planned to do coastal ecosystem work because the hyperspectral measurements can be used to classify vegetation and to determine the impact of the oil on that vegetation, as well as to map the volume of the oil in the upper ocean over the oceanic portions of the slick. In a couple of weeks, AVIRIS flights took as much data as we usually take in an entire year or more. And whereas it usually takes two-to-three months for the AVIRIS data to be processed, calibrated, and distributed, the team working at Johnson, very early on, got it down to providing imagery and calibrated radiances to between 6 to 12 hours after a flight. Those measurements were then given to NOAA and USGS scientists, as well as analyzed by NASA and academic scientists.

The director of the United States Geological Survey Marcia McNutt also praised AVIRIS during the session for its ability to image oil on the surface, and noted that AVIRIS helped determine the lower bound on the amount of oil released. “[It] did an excellent job of determining the amount of oil that was likely to impact the shoreline,” she said. “We are very grateful for the support we received from NASA for this work,” she said.