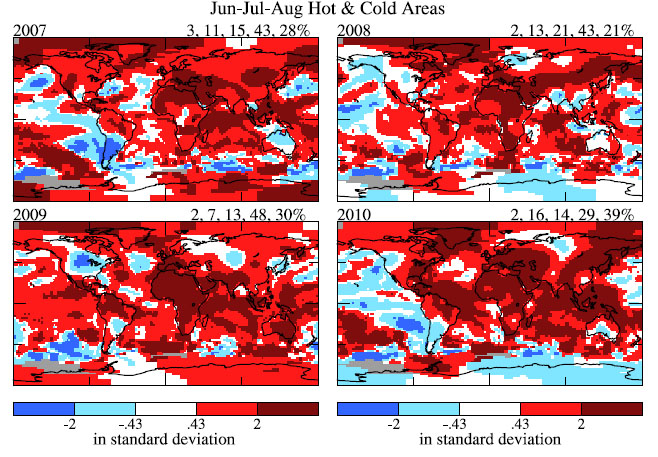 During a congressional hearing in 1988, Goddard Institute for Space Studies climatologist James Hansen predicted that a perceptive person would be able to notice the climate was changing by the early 21st century. Has his prediction panned out? He digs into the topic in a discussion published this week on his website.

The short answer: yes, depending on where you live, you should be able to tell that in the last four years, for example, summers have been warmer than average. The last four winters have also been noticeably mild in most parts of the world. (Though it’s worth noting that the last two winters in the continental United States have actually been cooler than average).

Read on below to see how Hansen explains it in more detail. (I’ve excerpted some of the more accessible sections of the text and two graphs, but the full discussion is available here as a pdf.)  More context and details about trends in the global surface temperature record are also available.

This past winter, for the second year in a row, seemed pretty extreme in both Europe and the United States. So this is a good time to check quantitatively how seasonal climate change is stacking up against expectations.

People’s perception of climate change may be the most important factor determining their willingness to accept the scientific conclusion that humans are causing global warming (or global climate disruption, as you please). Itis hard to persuade people that they have lying eyes.

In the paperattached to my congressional testimony in 1988 (1) we asserted that theperceptive person would notice that climate was changing by the early21st century. Now we can check the degree to which the real world has lived up to this expectation. The answer will vary from one place to another, so let’s make a global map for this past winter. Each gridbox will be colored red, white or blue, depending on how the local temperature this past winter compared with the categories established by the 1951-1980 climatology. 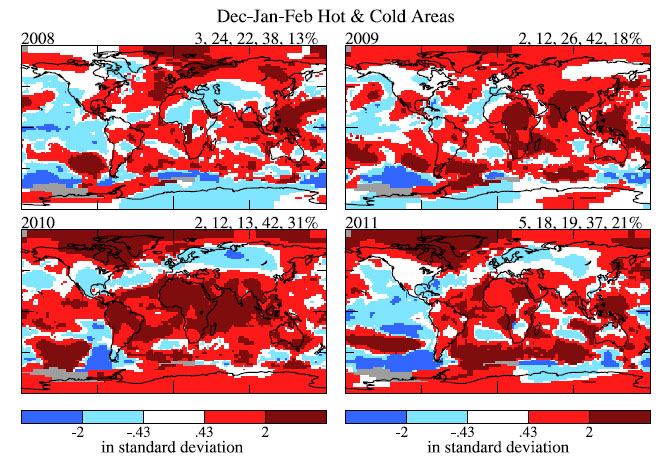 Figure 7 (above) shows the result for the last four winters (summers in the Southern Hemisphere). To make the maps even more useful we use dark blue and dark red to show those places in which the temperature fell in the extreme (>2 standard deviations) category that occurred only a few percent of the time in the period of climatology1. The extreme cases are important because those are the ones that have greatest practical implications, especially for nature. Species are adapted to climate of the past, so a change to more extreme climates can be detrimental, especially if it occurs so rapidly that species cannot migrate to stay within tolerable climatic conditions.

The numbers on the top of the maps are the percent of the area falling in the five categories: very cold, cold, normal, hot, very hot. In the period of climatology those numbers averaged 2%, 31%, 33%, 31%, 2%, rounded to the nearest percent.

Figure 7 reveals, for example, that the past two winters in Northern Europe both fell in the category of “cold” winters, but not extreme cold. The area hot or very hot (51-73%) far exceeded the area with cold or very cold conditions in all four years (14-27%).

Figure 8 (top) shows results for Jun-Jul-Aug for each of the past four years. In both Jun-Jul- Aug and Dec-Jan-Feb it is apparent that the area falling in either the hot or very hot category totals 64-78% in agreement with our 1988 climate simulations.

The perceptive person who is old enough should be able to recognize that the frequency of unusually mild winters is now much greater than it was in the period 1951-1980. But mild winters may not have much practical impact. So a return to one or two colder than average winters may affect the public’s perception of climate change.

On the other hand, the huge increase in the area with extremely hot summers, from 2-3% in 1951-1980 to as much as 30-40 percent in recent years and most of the land area in 2010. If people cannot recognize that summers are becoming more extreme they may need to have their senses examined or their memories. Perhaps the people who do not recognize climate change are living in air-conditioned environments, which are restricted mainly to one species.

14 thoughts on “Have the Last Four Summers and Winters Felt Warmer?”