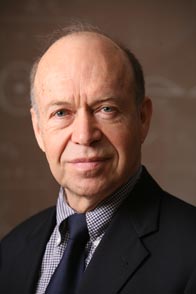 During the extreme heat waves and droughts of the early 1980s, climatologist James Hansen noticed coincident public discussions about the possible link of extreme events to climate change. He says discussion cooled, however, when natural variability turned up a season with average or cold temperatures. In 1988, another heat wave and drought wiped out crops in the U.S. Midwest, and resulted in more than 5,000 deaths, according to NOAA’s National Climatic Data Center. That same year, Hansen introduced the analogy of loaded dice to demonstrate variability and the growing frequency of extreme temperature events.

On one of the six-sided dice, Hansen painted two sides blue, two sides white, and two sides red to represent the chance of a cold, average, or warm summer season, respectively. That’s how the dice would have rolled from 1951 to 1980, when climate was relatively stable. On the other die – this one loaded – Hansen painted one side blue, one side white, and four sides red. That’s how climate models suggested the dice would roll by the first decade of the 21st century, should the increase of greenhouse gases in the atmosphere play out as it did.

“If you keep track for several seasons you notice the frequency of the anomalies has now changed, and you’re getting much more of those on the warm side than on the cool side,” Hansen says.

The changes that Hansen and colleagues calculated in 1988 turned out to be close to reality, as far as how many sides of the dice would now be red as opposed to blue to represent today’s climate. But a key difference between the 1988 dice and the new climate dice is the addition of an entirely new color. Almost one full side previously red is now brown, representing a new category of extreme hot events.

“I didn’t think about adding another color in 1988,” Hansen says. “Since then I have realized that the extreme cases are the most interesting and hold the most potential for impact, such as we’re seeing this summer in the case of the drought and devastated corn crop.”

The division between warm and cool will continue to change in the future, Hansen says. “But it’s still a crapshoot and you shouldn’t take one cool season as an indication that there’s something wrong with our understanding of global temperature and warming.”

Hansen and colleagues continue to use the dice for communication purposes, but they now employ a different statistical tool – the bell curve – that they say better demonstrates the change in temperature anomalies, particularly at the extremes.