The 2011 La Niña, one of the strongest in recent decades, absorbed so much moisture from the oceans and dropped it as precipitation over northern parts of Australia and South America that global mean sea levels fell by about half a centimeter. That was the key point that Eric Lindstrom, an oceanographer based at NASA headquarters, made today while giving a presentation at NASA’s outreach booth at the American Geophysical Union’s fall meeting.
He gave the talk with the help of a sophisticated visualization system — called the Hyperwall — that’s capable of displaying large sets of data. The system consists of nine 42-50“ flat-screen monitors arranged in a 3 X 3 array.

As Lindstrom pointed out, the fast transition from the 2009-10 El Niño to the 2010-11 La Niña triggered changes in precipitation patterns across the tropics, transferring enough water over land to cause global mean sea level to fall during the spring and summer of 2011. Data from NASA’s GRACE and TRMM satellites have confirmed that the “extra” water and rain has ended up over land as freshwater (see below). The drop in sea level happened despite the background rate of global mean sea level rise, which has been fairly steady at 3.2 millimeters per year since the early 1990s.

At AGU? Be sure and check out the ongoing exhibit activities (pdf) and full schedule of hyperwall presentations (pdf)  at NASA’s exhibit (#1637). All the figures shown in this post are available in the Dynamic Oceans presentation on the Earth Observing System’s Hyperwall page. Blog text by Heather Hyre. Photo by Winnie Humberson.

Oceanographer Josh Willis of NASA’s Jet Propulsion Laboratory was recently honored by the White House as a recipient of the Presidential Early Career Award for Scientists and Engineers (PECASE). Willis studies the ocean — particularly the height of the sea surface — with satellite data, though he also works with colleagues who put instruments below the surface of the water. By blending such measurements, he has already made a scientific mark in the study of sea level rise. We caught up with Josh — shown below with White House science advisor John Holdren and NASA deputy administrator Lori Garver — to discuss his inspiration, the importance of the ocean, and the necessity of communicating science. 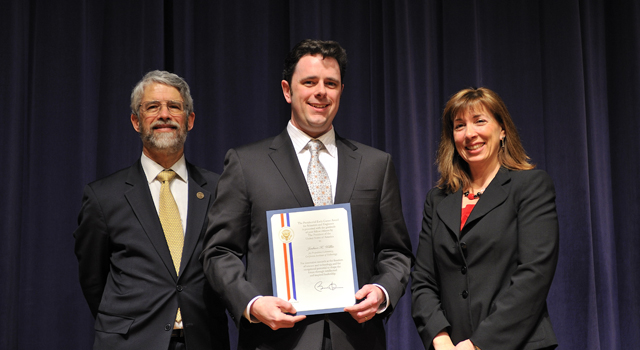 WhatOnEarth: When you were a child, what did you want to be when you grew up? When did you decide you wanted to be an ocean scientist?

Josh Willis: When I was 9 or 10, I found a book about Einstein’s Theory of Relativity that my parents had lying around the house. I remember reading it and then peppering my parents with questions they couldn’t answer. (This was long before Google, mind you.) So for a long time, I wanted to be a physicist. A couple years of graduate school in physics convinced me otherwise, and I started studying oceanography at the Scripps Institution of Oceanography. Studying the ocean and climate appealed to me because I got to use all the physics and math I learned, but it was also closer to home and of practical importance to a lot of people. Plus, it’s just fun to say “oceanographer” whenever people ask me what I do.

WhatOnEarth: What is the best scientific paper you have written?

Willis: It’s tough to say. Sometimes the papers I think are important are different from the ones that other scientists remember best. But my papers on the causes of sea level rise — based on comparisons between satellite altimeter data, observations of ocean temperature changes, and changes in ocean mass measured by the GRACE satellite — were interesting and fun to write.

WhatOnEarth: What is the most important thing that few people know about the ocean?

Willis: The ocean is the silent martyr of global warming. We always think of global climate change in terms of the warming atmosphere, but it is actually the ocean that absorbs almost all of the extra heat and a whole lot of CO2. The warming contributes to sea level rise and changes ocean ecosystems, while the extra CO2 makes the ocean more acidic, threatening plankton and other tiny critters that make up the foundation of the oceanic food chain.

WhatOnEarth: Why do you feel compelled to talk to the public about your science?

Willis: Communicating our work is a really important part of doing science that most scientists sort of neglect. Figuring out new things about the world around us is only helpful if we communicate them to everyday people. Plus it’s fun and exciting to talk to non-scientists because the questions are often fun and interesting, and I come away feeling inspired and invigorated.

WhatOnEarth: What is the funniest or strangest question you’ve ever gotten?

Willis: I often get a chuckle out of the people who say that global warming is a vast conspiracy among scientists. Scientists love to prove each other wrong, and most of the time we can barely agree on simple questions like “why is the sky blue,” much less orchestrate a conspiracy.

WhatOnEarth: Is the PECASE award an affirmation or an inspiration for your career?

Willis: This is definitely a great honor and inspiration. When President Obama met with us, one of the first things he told us was how nice it was to honor a group of scientists still in the early stages of our careers. “All of you folks are younger than me!” he said. But he also made it clear that he expected a lot from us in the future. That’s a pretty big inspiration when the President tells you he’s expecting great things. And it’s a pretty big responsibility, too. I guess that means it’s probably time to get back to work now…

Scientists aren’t known for being the savviest of public speakers, but Penn State’s Richard Alley is that rare researcher who knows how to give a talk. Alley — who’s willing to sing, dance, and gesticulate vigorously to get a point across — gave a lecture about carbon dioxide to an overflow crowd of scientists at the American Geophysical Union meeting this year that’s well worth watching.

Blogger and University of Toronto computer scientist Steve Easterbrook has an excellent blow-by-blow of the talk, but the heart of it came down to this point, which Alley made on his last slide:

An increasing body of science indicates that CO2 has been the most important controller of Earth’s climate.

If you want the details, (and the details are a pleasure to sit through in this case because of Alley’s gregarious speaking style) AGU has posted video and slides of the full talk. Still want to know more about carbon dioxide? NASA’s Jet Propulsion Laboratory (JPL) released new details about the distribution of carbon dioxide in the troposphere, the region of Earth’s atmosphere that is located between 5 to 12 kilometers, or 3 to 7 miles, above Earth’s surface. (JPL also released a ten question quiz about the gas that you can access here).

Meanwhile, Alley participated in a NASA science update back in 2005 that explored the nature of sea level rise, a topic that NASA researchers continue to investigate and that you can explore interactively using our Sea Level Viewer.