“I have spent many years of my life in opposition, and I rather like the role.” Eleanor Roosevelt 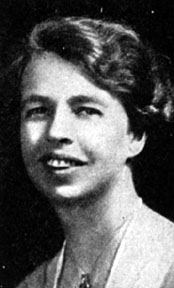 (1884-1962) Eleanor Roosevelt is most well known as former First Lady when her husband, Franklin Delano Roosevelt (FDR) was President of the United States.  She was a humanitarian and civic leader, and her work for the welfare of youth, African-Americans, the poor, and women spanned national and international reach. Even after the death of FDR, she became a delegate to the United Nations General Assembly, and in 1948, she wrote the Universal Declaration of Human Rights, which affirmed life, liberty, and equality internationally for all people regardless of race, creed or color.  Additionally, she helped establish the state of Israel and attempted negotiations, while cautiously, with the Soviet Union (now Russia).

One thought on “Women's History Month Shout Out”