“I threw it down pretty good,” Georgeann Wells said, laughing. “It was a powerful one, because I was all by myself. I had the speed, I had the endurance to get it up there. It was awesome.” 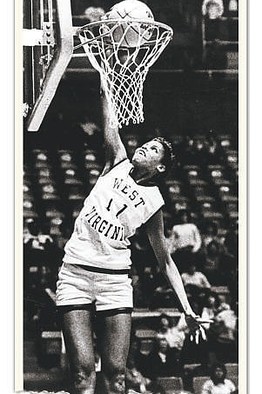 (1964- ) Georgeann Wells was a women’s basketball player at West Virginia University.  In 1984, she became the first women in NCAA history to dunk a basketball.  This feat was noted by opposing player Sherry Winn when she said, “For so long, women played below the rim. We weren’t as fast, and we didn’t have the same dribble moves as men did. For women’s basketball, it was a great event. It was a mark of something else to come.” However, in a time when media capture was more limited, the event was virtually unknown to those outside of the 100 or so fans who attended.  The opposing team’s coach did have a video of the game but refused to turn it over to media.  Years after his death, his son released the tape, which in turn proved the dunk happened. Ms. Well is now a mother of three and runs a summer adventure camp.