One of the best books I have ever read is Muhammad Yunus’ Banker to the Poor.  In this book, Yunus managed to make me think twice when bargaining during my around the world travels earlier this year.  As I traipsed through Kathmandu, Nepal or Siem Reap, Cambodia, Yunus’ words reverberated through my brain, and I just knew that some of these shops had to have been started by someone who once never dreamed she could be a shop owner. 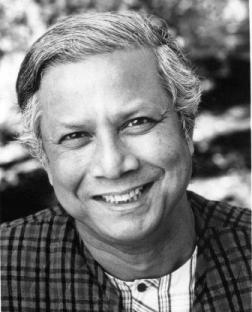 You see-this book describes his economic theory and how he practiced what he preached, creating one of the most successful banks (based on repay rate) in the world called Grameen Bank.  Oh but wait-it’s not your typical bank.  It’s not a bank where you or I would go for a car loan or the best rate on a mortgage.  No ma’am.  It is the kind of bank that believes in the poor.  Not college student poor. The real poor.  The ones whose livelihood depends on so little that if one doesn’t fulfill his or her duties, someone dies.  A child dies. A sister dies.  A parent dies.  Yunus takes you through his quest to find the poorest (a feat seemingly easy but proven difficult…finding the truly poor was a task in and of itself) and then begging them for their trust.  All so he could make their lives and the economy of Bangladesh better.  All so he could teach them how to not only survive but improve life.

Here’s the best part.  Yunus proved to himself by experience and cultural knoweldge (he is Bengali and served as a professor of Economics there after completing his Ph.D. at Vanderbilt) that targeting women is the most successful way to implement his theory of microlending.  The Grameen Bank lends very small amounts of money ($27 for example) in the eyes of a Westerner, but in these developing countries the money amounts to the very number necessary to build a business.  An entire business!  A means to flourish and get ahead.  And women, he found, were selfess.  He observed that women would do anything to ensure the survival of their children.  Morever, albeit scared for their lives, women were willing to risk everything to have the chance at a better life.  Not only for themselves but also for their children.  All the while, the self satisfaction that comes with a better life further fuels them to want more.  To work for more.  To obtain more.

It was no easy feat considering that women in many parts of these countries are not to speak to men other than relatives and husbands.  Let alone, earn money herself?  Well, that’s a sure fire way to upset your husband.  It’s foreign to many people in the Western world, but there still exist places where women don’t have the rights we are given by simply being born.  It’s always difficult for me to see this when I go back to my parents’ village in India.  It’s no comparison to what he describes, but certainly there are times when I am not allowed to stand with the men or must follow behind them.  There are times when my Gujarati (the spoken language) is corrected because the verb tenses I use when referring to my husband are “disrespectful”.  I take it all in stride because I believe in the saying “When in Rome…”.  However, my own travels remind me that these areas of the world do exist.  And Yunus fought the fight and I’d say he won.  The Grameen Bank has a whopping 98% return rate, and the theory has been implemented in numerous countries, including some segments in the USA.  For his work, he was rewarded a well deserved Nobel Peace Prize in 2006.

And why am I telling you about this book that is clearly not breaking news any more?  Because this article by Ted Turner, which was written earlier this week, reminded me of the book. It’s about how women are the key to slowing down our rampant population growth.  The book and the article are not even directly related, but somehow my brain tied the two together.  My guess is before reading this book, I would have completely misinterpreted Mr. Turner’s point.  I would have huffed and puffed to my husband about how insane one must be to blame women for the world’s population issues.  When in fact, Mr. Turner isn’t blaming anyone. Now, I read it with a totally different perspective.  Sure, conception requires men too.  No one can argue against that.  But, Yunus proved that educating women in parts of Bangladesh was key to his theory of improving life.  So, maybe-just maybe-Mr. Turner is onto something with this one.

5 thoughts on “The World's Population and Women”