Skip to content
“At the time I was arrested I had no idea it would turn into this. It was just a day like any other day. The only thing that made it significant was that the masses of the people joined in.” – Rosa Parks 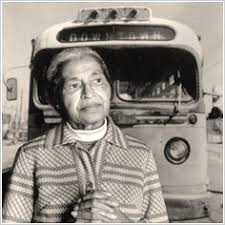 (1913-2005) Rosa Parks was born in Tuskeegee, Alabama and attended a school for all African-American children in the 1920s.  Her school only went up to the sixth grade, and at the age of 11, she was sent to Mongomery, Alabama for further studies.  Unfortunately, she had to drop out of school to care for a sick family member.  Ms. Parks is most often remembered by the masses for her refusal to give up her bus seat during an era where this was expected from an African-American.  Many have credited this moment to be the spark for the modern civil rights movement in the United States.  Eventually, Ms. Parks and her fellow civil rights leaders movements led to the 1956 Supreme Court ruling declaring segregation illegal on public buses.