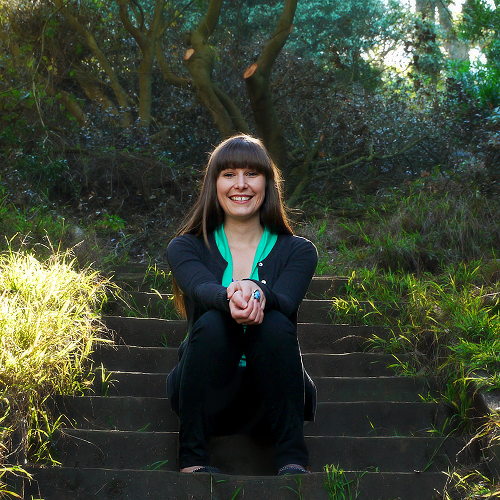 What inspired you to apply for DEVELOP?
While I was working on my master’s degree at SanFrancisco State University, I became engaged in GIS and remote sensing throughcoursework, however it was a fellow classmate who inspired me to apply forDEVELOP. Michelle Newcomer, a previous DEVELOP Center Lead, gave apresentation during our Hydrogeology class about projects she had been workingon using remote sensing for wetland restoration. Her excitement and professionalism impressedme, and I was drawn to the idea of being able to conduct hands-on research.

What interests you most about Earth science?
Our personal connections to nature and the rolehumans play in natural resource management interests me the most about Earth science. As an undergraduate student, Ihad the opportunity to participate in an intensive field work course in thesouthwestern U.S. This course allowed me to primarily focus on field work andexploration, and this really sparked a continuing passion for Earth science. As a current researcher, I amfascinated by the influence of technology and engineering in Earth science, andhow we can study geological and ecological phenomena from hundreds of milesaway. I think that with this emergenttechnology, the progression of Earth science will increase dramatically.

What role does NASA play in your life/career?
Thegreatest role of NASA in my life and certainly my career are the people I havethe opportunity to work with. Coming towork every day and being surrounded by some of the most intelligent people onthe planet challenges you to think intellectually and allows you to be creativeand unrestricted in your research ideas.

What do you consider your greatest accomplishment?
As a young adult, I would have said my greatestaccomplishment was winning the state golf championship when I was 16. However, as my career in science isprogressing, my most current accomplishment is the completion of my master’sdegree. When I submitted my monstrousthesis into the printing office, I felt pretty great!

Can you describe a time when you had to make a difficult decision and what you learned as a consequence?
One of the greatest decisions of my life and career was the decision to go back to school for my master’s degree. After I obtained a B.S. in Geoscience fromthe College of Charleston, I began working for an Environmental Consulting firmas a Staff Geologist. At first, the jobwas ideal; I was making more money than I ever had before, I had free time toenjoy the city and the beach, and I was working in my chosen field. However, after about six months, I began towonder if I was not challenging myself enough intellectually. I then began toapply for master’s programs all over the country, and decided on a few inCalifornia. While it was difficult todecide on the right place to attend, one of the largest obstacles was movingacross the country to a place where I had never spent much time, and where Iknew no one. While this was daunting, Igathered up my courage, and made the leap. What I gained surpassed my expectations, and I began to think aboutacademia and science as a career. Ilearned that the greatest challenges in life can sometimes be the mostrewarding, and I will now always be open to turning my life upside down for thebenefits that come with change.

Who has been the biggest influence on your life, and what lessons did they teach you?
My father is quite a character; his long hair, loudmouth, and uncompromising attitude towards just about anything in life may leadpeople to think he is a wild guy. Whilethis may be true, my father has influenced my life in so many ways frominstilling the ideals of hard work, to a focus on the environment and how weinteract with it, and for his never-ending skepticism. As a past employee for the Indiana Departmentof Environmental Management, he worked for over 20 years to face tough issuesof water contamination and pollution from large industrial facilities, such asthe steel mills along Lake Michigan. Healways displayed a passion for his work and taught me a great deal about thedifficulties of environmental regulation. He has also taught me to face challengesin life head on, and to be open to new opportunities, like when he left a jobhe held for over 20 years to become the manager of the sanitation district forMichigan City, Indiana. He has shown me that I don’t have to compromise mybeliefs and plans for the future and that with hard work we can help to improveour life and others.

How has your career surprised you or given you unexpected opportunities?
My career with NASA has really pushed me to pursuemy academic journey. I began in theDEVELOP Program while in my master’s program at San Francisco StateUniversity. When I first began, I thoughtI would just obtain my master’s and move into a career. However, being able towork on real-world research and working with other students sparked my interestin pursuing academia and becoming a professor. I am now a PhD student at theUniversity of California, Santa Cruz in the Environmental Studies Department. Additionally, my work with our partneragencies has opened me up in new ways to the idea of scientific communicationand I am passionate about working as a bridge to ensure that scientificresearch will be beneficial to the community. In order for science to bedirectly useful to our society, we must be able to speak with people of alldifferent backgrounds and take our heads out of the “researchers’ realm” tomake our science useful.

What does your future hold?
I am hopeful that at some point in the future I willbe able to get that elusive “Dr.” in front of my name, but more importantly, Ihope to work as a teacher to the next generation of scientists. It is my goalto work either at a university or in a government career that allows me toconnect researchers and students back to their community.

What one piece of advice would you like to pass on to those who read your story?
I would advise young professionals and students totake risks and be open to major changes in your life. Don’t be afraid tototally change your outlook, career path, or research plans. These changesallow us to think outside the box, and be connected with new experience thatwill help expand our intellectual thinking. Oh yeah, and have some fun!