“[She was] the woman who in February 1946 wrote the women’s clause of Japan’s new draft constitution, the impresario who for almost 40 years brought thoughtful, dazzling and original Japanese and Asian performing arts to American audiences”
– Nassrine Azimi 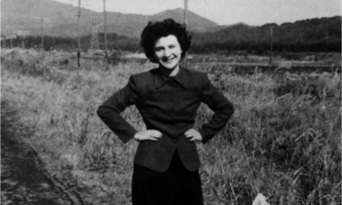 Beate Sirota Gordon in Japan in 1946

Beate Sirota Gordon (1923-2012) was a long-unsung heroine of Japanese women’s rights, having written them into Japan’s post-World War II Constitution. First at the Japan Society and then the Asia Society, she worked tirelessly to introduce North American audiences to authentic and traditional artists from across Asia.

Beate (pronounced bay-AH-tay) was born in Vienna to Leo Sirota, the renowned Ukranian concert pianist, and the former Augustine Horenstein on 25 October 1923. The family moved to Tokyo when Beate was 5, where her father taught at the Imperial Academy of Music and she absorbed both Japanese language and culture. In 1939, just before she turned 16, Beate left for Mills College in Oakland, Calif. while her parents remained in Japan.

In December 1941, the attack on Pearl Harbor made it impossible for Beate to contact her parents, leaving her alone with no financial support. While still a student at Mills, Beate put her foreign language skills (she was fluent in English, Japanese, German, French, Spanish, and Russian) to use, monitoring radio broadcasts from Tokyo for a United States government listening post in San Francisco. At that time, she was one of 100 Caucasians in the entire United States who were fluent in Japanese. She graduated from Mills College in 1943 and became a naturalized US citizen in 1945.

When WWII ended, she still did not know whether her parents were alive or dead. Beate joined General MacArthur’s staff as an interpreter, and arrived in a devastated Tokyo on Christmas Eve, 1945. She found her parents malnourished but safe, having been interned in the countryside.

Beate was the only female assigned to MacArthur’s top-secret constitutional committee, charged with drafting Japan’s post-war constitution in just 7 days, a task which the Japanese government had failed to accomplish twice. As “the only woman in the room”, she was tasked with composing the section on women’s rights. She produced what became Article 24 of the Constitution of Japan:

“Marriage shall be based only on the mutual consent of both sexes and it shall be maintained through mutual cooperation with the equal rights of husband and wife as a basis. With regard to choice of spouse, property rights, inheritance, choice of domicile, divorce and other matters pertaining to marriage and the family, laws shall be enacted from the standpoint of individual dignity and the essential equality of the sexes.”

Growing up she saw how women were treated in Japan; they were usually married to men they did not know, could inherit nothing, and could even be bought and sold like chattel. Beate understood the importance of having women’s rights recognized in the Constitution itself, and fought to preserve Article 24 in spite of protests from the Japanese negotiators. The 25-year oath of secrecy imposed upon the committee members kept her contributions to women’s rights unknown for decades.

Following her return to the United States, Beate worked to introduce North American audiences to traditional arts and performances from across Asia, first at the Japan Society and later the Asia Society. She traveled the continent scouring for talent, bringing Vietnamese water puppets, Javanese dancers, Korean pansori singers, and many others to stages throughout the United States and Canada.

“Pearl Young was indeed a remarkable woman. She was not only the first female professional employee of the National Advisory Committee for Aeronautics (NACA), she was also a teacher, journalist, lecturer, author and world traveler.” – W. Hewitt Phillips
Pearl Young in the Instrument Research Laboratory at what is now NASA Langley Research Center
In 1922, Pearl I. Young (1895-1968) became the first woman hired as a technical employee, a physicist, of the National Advisory Committee for Aeronautics (NACA), the agency that was the predecessor to NASA. The contributions she made led the way for professional women at Langley Research Center.
Pearl Young grew up in North Dakota and left home at age 11 to work as a domestic in order to attend high school. She also worked her way through college, graduating in 1919 from the University of North Dakota (UND) as a Phi Beta Kappa with a triple major in physics, mathematics, and chemistry. Following graduation, Young was offered a faculty position in the UND Department of Physics, where she taught for two years. In 1922 she accepted an appointment at the Langley Memorial Aeronautical Laboratory of the NACA (now NASA Langley Research Center) in Hampton, VA. She became the first professional woman employee at Langley and the second female physicist working for the federal government.
In 1929, Young was appointed as Langley’s first ever Chief Technical Editor. Perhaps her most lasting contribution to the NACA and NASA was setting up an editorial office and writing the “Style Manual for Engineering Authors”, a manual that set the format for reports on research conducted at Langley and was subsequently adopted by all of the NACA Centers.
Young was also a part-time reporter and feature editor for the regional newspaper, earning a front-page by-line for her interview of Eleanor Roosevelt. Young did not only report on noteworthy people and events. She experienced adventure firsthand, paying $800 for round trip ticket No. 1 on the first flight of the airship Hindenburg in 1936. She was one of the 50 passengers on the airship’s first flight, about a year before it crashed in flames into New Jersey.
In 1943, Pearl Young left Langley for the brand-new NACA Aircraft Engine Research Laboratory (now NASA Glenn Research Center) in Cleveland, OH, where she trained the lab’s new technical editing staff. At the end of World War II, Young resigned her post as chief technical editor of the NACA and returned to teaching, accepting a position as Assistant Professor of Physics at Pennsylvania State College (now Penn State University). In 1957 she returned to Lewis Laboratory, where she conducted specialized bibliographical work until her retirement from NASA in 1961.
Sources:  North Dakota NASA Space Grant Consortium; UND Discovery; Speech given by W. Hewitt Phillips, Langley Distinguished Research Associate, during the dedication ceremony of the Pearl I. Young Theater at NASA Langley Research Center (August 22, 1995) 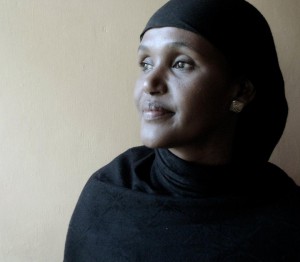