We’re kicking off our women in science spotlight series with an interview with Christie Funk. Learn about Christie’s path to her current position leading NASA Langley’s Regional Economic Development program and some lessons she’s learned along the way! 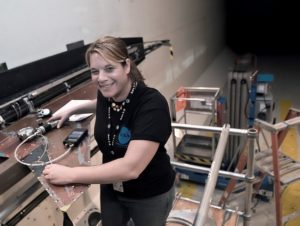 How did you discover your passion for STEM?
I grew up in Virginia Beach near military bases. Jets are just COOL!

Where do you work and do you remember what it was like on your first day of work?
I currently work in the Office of Strategic Analysis, Communications and Business Development (OSACB) leading NASA Langley Research Center’s Regional Economic Development (RED) program. Prior to that, I worked as a Research Aerospace Engineer in the Aeroelasticity Branch at NASA Langley Research Center. I remember my first day of work as if it was just yesterday. I was a Langley Aerospace Research Summer Scholars (LARSS) student and had my first assignment as an engineering intern in the Aeroelasticity Branch/Transonic Dynamics Tunnel (TDT). I remember the butterflies in my stomach as I drove through the NASA gate for the very first time. I remember how proud I felt to wear my NASA badge. I remember feeling excited, determined to never leave, and terrified that I would fail. On my first day, I was introduced to my mentors; two gentlemen (Dr. Walt Silva and Mr. Boyd Perry, III) who, over the years, would become sources of inspiration, my strongest advocates, my teachers, and my friends. On day one, I stood inside the TDT and felt overwhelmed by where I was, the history wrapped up in the testing conducted there, and the fact that I was standing inside a wind tunnel. Boyd spent time gauging where I was with my knowledge base (or lack thereof) and showed me equations that looked like a foreign language to me (I now know those squiggly characters and matrices represented the Aeroelastic equation of motion). I should mention that I was granted the internship opportunity without having an engineering degree at the time (that’s another story). I returned to my desk and made a game plan: Do whatever it takes to stay here. And so the story goes, head in the books until I understand. I didn’t cry until I left work for the day; I was in over my head. I never thought they would let me stay, but the story had a happy ending.

What do you enjoy most about what you do?
I get to build things, I get to create things. I get to contribute to an Agency that strives to improve Humankind. I get to be a part of paving the way for future generations.

What inspired you to work in this field?
A combination of seeing my first shuttle launch (Endeavor) and JFK’s famous speech.

“…First, I believe that this nation should commit itself to achieving the goal, before this decade is out, of landing a man on the moon and returning him safely to the Earth. No single space project in this period will be more impressive to mankind, or more important for the long-range exploration of space; and none will be so difficult or expensive to accomplish….” – JFK

Perseverance pays off. This lesson sits at the top of my list.
Luck is when preparation meets opportunity.
If I’m prepared, opportunity will knock.
A comfort zone is a beautiful place but nothing ever grows there. Seek growth.
Recognize and appreciate those who help along the way and pay it forward. People matter.

What do you consider your greatest accomplishment?
My M.S. in Aerospace Engineering is my greatest accomplishment. My background happens to fall off the beaten path. I didn’t have an undergraduate degree in a STEM field when I pursued my M.S. At the time, I had a B.A. in Business Management and I was finishing up a non-technical Master’s degree in Aeronautical Science. My M.S. is a shared accomplishment. It is shared with my mentors at NASA, my co-workers, my professors at Old Dominion University and Embry-Riddle Aeronautical University, my family, and my friends. It is the accomplishment that led me to being hired at NASA. Graduation day wasn’t just graduation day. It was a day that marked the result of years and years of mistakes, successes and failures, and true grit.

What was the most difficult moment of your career? What did you learn?
I have recently changed jobs at NASA Langley. I began my career as a LARSS student in 2008. I worked in the Aeroelasticity Branch throughout my time as an intern and then during my participation in NASA’s Pathways program. Following graduation, I was hired into the Aeroelasticity Branch. In 2015, I was accepted into NASA’s Foundations of Influence, Relationships, Success, and Teamwork (FIRST) leadership development program. Throughout my year in FIRST, I had the opportunity to explore other career paths within NASA. As a result, I sought out a temporary detail position in OSACB. I wanted to merge my business and engineering backgrounds while contributing to the Agency and impacting lives. At the end of my detail, and after much deliberation, I decided to leave my engineering position and continue work in OSACB focusing on regional economic development activities. The decision-making process to make this change taught me to think about what I really want out of my career and what type of impact I want to make. It also taught me that my fear of losing support from colleagues in my previous role was make-believe. As it turned out, the people who had surrounded me throughout my career wanted to help me grow. 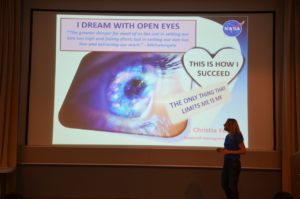 The list is too long and there is never just one. The most influential lessons I’ve learned haven’t come from books. “All work is admirable”, something my grandfather once told me because I was embarrassed to be serving sandwiches behind the counter in a Schlotzskys Deli. “The greatest glory in living lies not in never failing, but in rising every time we fall”, Nelson Mandela once said. Humility, kindness, strength, fairness and equality, compassion, integrity, acceptance, and tolerance; the foundations of lessons I’ve learned from others.

How has your career been different than what you’d imagined?
As a former restaurant manager, my wildest dreams never realized NASA was in my future, but here I am. I used to imagine that I would have one job. Within NASA, there are so many opportunities to work in different fields, so I no longer think of my career in the scope of one job. I now think of my career as an opportunity to use my skills and abilities to impact the world through various roles.

What does your future hold?
I have no idea! There was a time when I saw my future-self sitting in a glass window office making those big decisions that help shape NASA’s direction and there was a time when I saw myself working on wind-tunnel models and computing gust loads for most of my career. Now, I see my future-self as striving to work in roles where I can be the best contributor that I can be and where I can make a difference. Clayton Turner, one of my mentors during FIRST, taught me that I can lead from any chair. I see leadership in my future but it no longer matters to me where I sit. 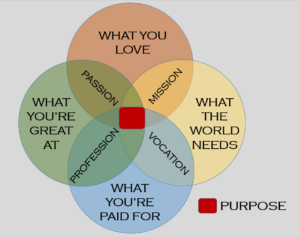