Skip to content
“Pearl Young was indeed a remarkable woman. She was not only the first female professional employee of the National Advisory Committee for Aeronautics (NACA), she was also a teacher, journalist, lecturer, author and world traveler.” – W. Hewitt Phillips
Pearl Young in the Instrument Research Laboratory at what is now NASA Langley Research Center
In 1922, Pearl I. Young (1895-1968) became the first woman hired as a technical employee, a physicist, of the National Advisory Committee for Aeronautics (NACA), the agency that was the predecessor to NASA. The contributions she made led the way for professional women at Langley Research Center.
Pearl Young grew up in North Dakota and left home at age 11 to work as a domestic in order to attend high school. She also worked her way through college, graduating in 1919 from the University of North Dakota (UND) as a Phi Beta Kappa with a triple major in physics, mathematics, and chemistry. Following graduation, Young was offered a faculty position in the UND Department of Physics, where she taught for two years. In 1922 she accepted an appointment at the Langley Memorial Aeronautical Laboratory of the NACA (now NASA Langley Research Center) in Hampton, VA. She became the first professional woman employee at Langley and the second female physicist working for the federal government.
In 1929, Young was appointed as Langley’s first ever Chief Technical Editor. Perhaps her most lasting contribution to the NACA and NASA was setting up an editorial office and writing the “Style Manual for Engineering Authors”, a manual that set the format for reports on research conducted at Langley and was subsequently adopted by all of the NACA Centers.
Young was also a part-time reporter and feature editor for the regional newspaper, earning a front-page by-line for her interview of Eleanor Roosevelt. Young did not only report on noteworthy people and events. She experienced adventure firsthand, paying $800 for round trip ticket No. 1 on the first flight of the airship Hindenburg in 1936. She was one of the 50 passengers on the airship’s first flight, about a year before it crashed in flames into New Jersey.
In 1943, Pearl Young left Langley for the brand-new NACA Aircraft Engine Research Laboratory (now NASA Glenn Research Center) in Cleveland, OH, where she trained the lab’s new technical editing staff. At the end of World War II, Young resigned her post as chief technical editor of the NACA and returned to teaching, accepting a position as Assistant Professor of Physics at Pennsylvania State College (now Penn State University). In 1957 she returned to Lewis Laboratory, where she conducted specialized bibliographical work until her retirement from NASA in 1961.
Sources:  North Dakota NASA Space Grant Consortium; UND Discovery; Speech given by W. Hewitt Phillips, Langley Distinguished Research Associate, during the dedication ceremony of the Pearl I. Young Theater at NASA Langley Research Center (August 22, 1995)

This post is about fighting.  Believing.  Passion.  Success.  Standing up, arms flailing if need be. 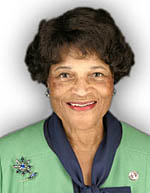 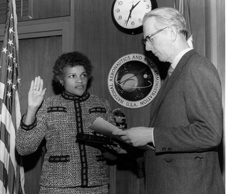 Dr. Harriett Jenkins worked for NASA from 1974 to 1992 in the Equal Opportunity Programs, paving the pathway that many of us have travelled thus far in our careers.  Because of Dr. Jenkins’ work, women, minorities, and disabled persons have a luxury of professional comfort not known during her own upbringing and career.  She also worked for the Senate as the director of the Office of Senate Fair Employment Practices, taking her beliefs even further through the government.

I had the pleasure of receiving the fellowship for which she is named (The Harriett Jenkins Pre-doctoral Fellowship) while I was pursuing my own doctorate in a STEM field.  During this time, I witnessed the quiet strength and invisible but surely able-to-be-woken feisty personality.  Dr. Jenkins could capture you with a simple smile and all ears were hers.  Others who worked with her during her tenure would tell stories of Dr. Jenkins, and they inevitably described her fervor and forward-thinking attitude.  Her ability to envision and convince.  To not only believe in something but also to see it through.

So as a woman at NASA, thank you, Dr. Jenkins.  As much as I like to believe that I am solely accountable for my successes of attaining this dream job, I must admit there are many others responsible for the opportunity, even if unbeknownst to me.  And I, for one, am thankful.

“All adventures, especially into new territory, are scary.” – Sally Ride (1951- ) Former astronaut and first American woman in space.  Dr. Sally Ride was selected as an astronaut candidate in 1978 and flew for the first time in 1983.  After retiring from the astronaut corp, Dr. Ride joined the University of Califorinia at San Diego as a professor and started her own organization called Sally Ride Science to encourage young girls to enter science, math, technology, and engineering fields.

“More women should demand to be involved. It’s our right. This is one area where we can get in on the ground floor and possibly help to direct where space exploration will go in the future.” – Dr. Mae Jemison

(1956- ) American physician and former astronaut who became the first African-American woman in space in 1992.  She left NASA in 1993 to start her own company on adapting technology to daily life.