Mission and launch officials for NOAA’s Joint Polar Satellite System-1 (JPSS-1) have convened today at Vandenberg Air Force Base in California in preparation for the satellite’s upcoming launch aboard a United Launch Alliance Delta II rocket.

During its time in the Astrotech Payload Processing Facility, JPSS-1 has undergone a series of routine prelaunch tests and checkouts, followed by mating to the Payload Attach Fitting and transport to the launch pad, where the Delta II rocket stood already assembled. The spacecraft then was hoisted into  position atop the rocket. Also installed were a trio of Poly-Picosat Orbital Deployers, or P-PODs, which will deploy a host of small CubeSat payloads after the JPSS-1 satellite is released to begin its mission. The entire payload has been enclosed within the two-piece fairing that will protect it during the climb to space. 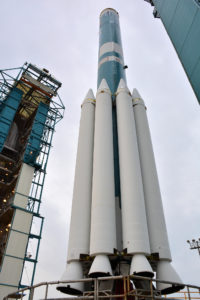