First – big news today – our launch date has officially slipped from June 2 to June 17.  This won’t affect our impact date significantly – we’ll be hitting the lunar south pole in early October 2009.  Still, just over one month until liftoff!

So, on the subject of launch, let me introduce you to our rocket.  LCROSS and LRO are launching on an Atlas V/Centaur combination, produced by the United Launch Alliance consortium, ULA for short.

Take a look at the photos!  In very late April, teams at our launch site at in began stacking the launch vehicle in the Vertical Integration Facility (the VIF). 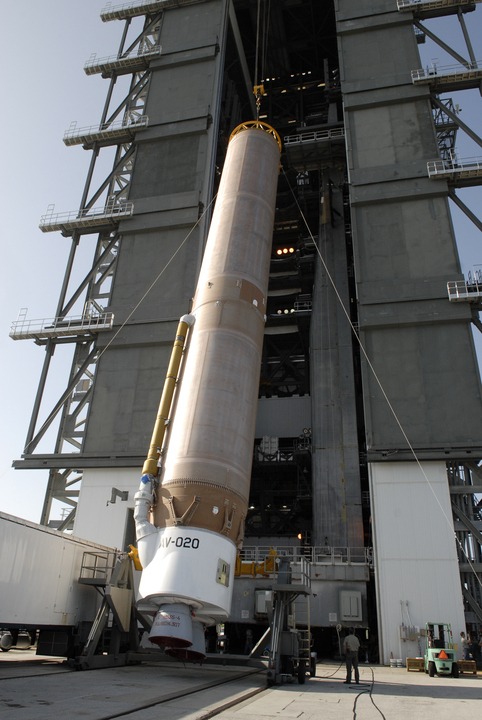 This first picture is of the Atlas V “booster”, the first stage of the launch vehicle that fires on liftoff.  In the photo, the crane is raising the booster vertically and placing it inside the VIF, where the launch vehicle is integrated before launch.  Amazing that something so large can be moved around like that.  AV-20 is our tail marking.  Notice that the rocket nozzles at the bottom of the booster have Cyrillic script on them.  They’re RD-180 engines, made in .

The Atlas V takes both LCROSS and LRO from the launch pad to the edge of space.  At that point, the launch vehicle second stage, called the Centaur, separates from the booster and fires to bring the two spacecraft into a coast orbit around the Earth.  All of this takes only 14 minutes! 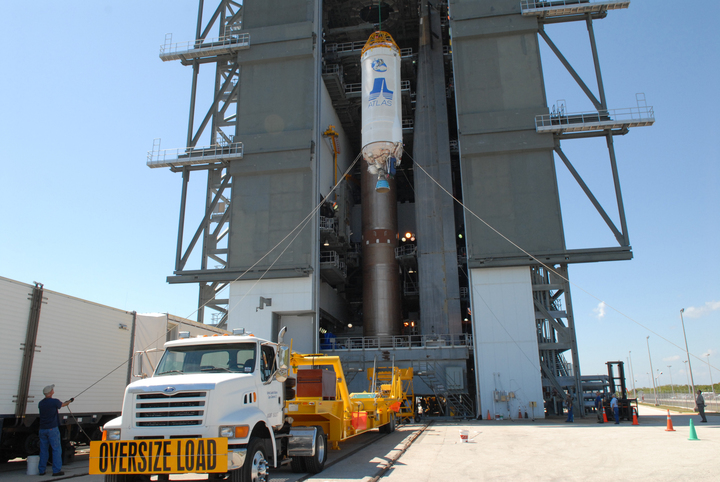 In this photo is the Centaur upper stage being hoisted into the VIF to be attached to the Atlas V (standing in the background).  LCROSS and LRO will ride the Centaur as it propels them into a “trans-lunar trajectory”.  In the photo, the large white rocket hanging from the crane is the Centaur (the LCROSS logo appears on the side).

At launch, LCROSS will sit atop the Centaur upper stage, and our companion spacecraft, Lunar Reconnaissance Orbiter (LRO) will sit atop LCROSS.  Both spacecraft will be encapsulated inside of a “payload fairing”, the nose cone that protects the spacecraft from the aerodynamic forces after launch before entry to space.  The whole stack will launch together.  Just 90 minutes after launch, after we’re all headed for the moon, LRO will separate from the stack and operate independently thereafter.

LCROSS, on the other hand, will stay attached to the Centaur for all but the last hours of its mission.  Just over five hours after launch, the Centaur will be depleted of propellant, and its flight computer will hand control over to LCROSS.  LCROSS will control both itself and the Centaur for the next four months.

Now think about this – the Centaur is also the “bullet” that LCROSS will use to impact the moon in order to loft debris from the lunar surface in our search for water.  As you can see, it’s not a small object – it is 2000 kg in mass (4400 lbs), more than the average car.  On impact, that whole thing will be moving at 2.5 km (1.5 miles) PER SECOND!  Way faster than a high-powered rifle bullet.

Hope you enjoy the photos!  They really drive it home how soon this is going to be, and how real this is becoming.

5 thoughts on “Welcome to the LCROSS Launch Vehicle”