The LCROSS Mission Design Team included the Centaur as a critical component of their mission from the very beginning.  It’s essentially a bonus impactor that stays with LCROSS after performing it’s normal function of delivering LRO and LCROSS on their way to the moon.  For the LRO-LCROSS launch and particularly for its contribution to the LCROSS mission, the Centaur was the focus of extra attention from both the LCROSS team and from the KSC/ULA-Atlas launch team.

Think of it as energy recycling.  The kinetic energy  [1/2 MV2] provided by the launch vehicle to get LCROSS and Centaur to lunar swing-by are later used to create the ejecta plume at the moon’s south pole.

Impacting a 2-ton Centaur upper stage enables the LCROSS mission to significantly increase the amount of lunar ejecta expelled from the target crater over what could have been achieved using only the spacecraft.

Centaur is a cryogenic (liquid hydrogen and liquid oxygen) powered rocket  upper stage. Its engine can be shut-down and restarted after one or more guided coast phases.  Centaur has a long history of successful  missions.  For LRO-LCROSS, instead of being parked in a safe orbit after sending LRO and LCROSS toward the moon, this is Centaur’s first role as a guided impactor for the science gathering  portion of a mission.

The Centaur upper stage used for the LCROSS mission is the same as Centaurs used to propel the Mars Reconnaissance Orbiter and Pluto-New Horizons on their way to Mars and Pluto, respectively.  The only significant modification to this Centaur is the addition of white thermal paint to help balance the temperature of the empty stage. 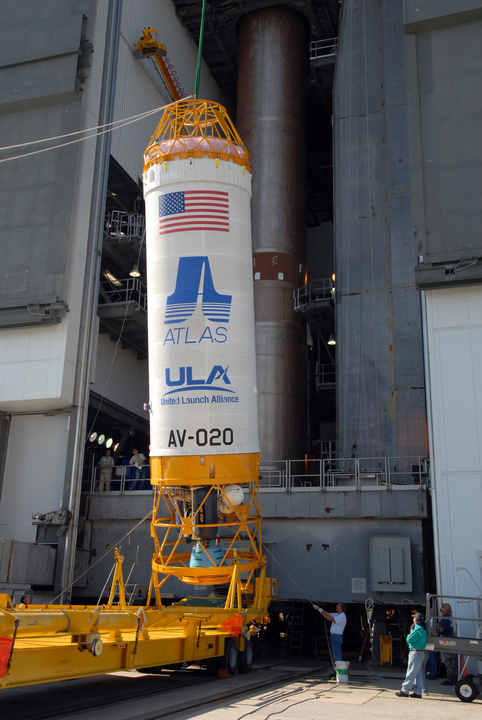 Upper Photo: The LCROSS logo, painted on the Centaur.  Lower Photo: The Centaur upper stage is lifted for mating to the Atlas-V first stage (Tail Number 020) at the Vertical Integration Facility in Florida (April 30, 2009). The Centaur was painted white to help manage the thermal environment during the 100-plus day LCROSS mission.  Yellow lifting hardware is ground handling equipment and is removed after stacking on the first (booster) stage.  Courtesy of NASA Kennedy Space Center.

What is particularly unique about this Centaur was the way that the United Launch Alliance (ULA) Atlas Team designed the flight profile and maneuvers after LRO separation to minimize the amount of residual hydrogen, oxygen, hydrazine, and helium left on Centaur.  This special care to ensure that the Centaur is as empty is possible, makes the Centaur very clean. It reduces the hydrogen (H2), oxygen (O2), and hydroxyl (OH) species that could be confused with in-situ water ice ejecta.

Since Centaur would be attached to LCROSS until just before impact, all of the Centaur hardware and functional system were analyzed and scrutinized and if necessary tested to ensure that they would not adversely affect LCROSS after LCROSS took over control from Centaur.

The final function to liberate Centaur as a guided impactor will be the release of the clamp band holding the LCROSS/Centaur stack together. This separation command will be sent by LCROSS approximately 9 ½ hours before impact.  The clamp-band and the separation system that will push LCROSS and Centaur apart, underwent long-duration testing to give the Mission team confidence that it will function smoothly after 100-plus days in orbit.

Additional Centaur info and history, courtesy of NASA’s Glenn Research Center, can be found at: https://www.nasa.gov/centers/glenn/about/history/centaur.html