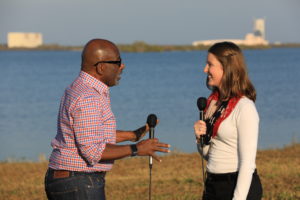 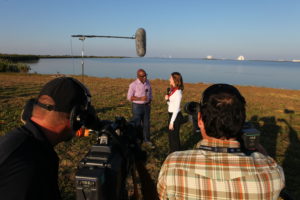 Noted television meteorologist Al Roker attended today’s launch of the GOES-R spacecraft and talked with NASA TV earlier. His interest in the mission, he said, comes from the fact that the satellite will give forecasters much more information to help them with their predictions. GOES-R carries sensors that are much more advanced than previous GOES satellites. The result, Roker said, will be akin to going from black and white television programming to High Definition in one leap. Photos by NASA/Kim Shiflett

As for the GOES-R spacecraft itself, it is coasting through space right now with the Centaur upper stage still attached. All systems are performing well. The Centaur will burn its single engine one more time beginning at 10:09 p.m. EST to put the GOES-R spacecraft into a transfer orbit. The spacecraft will use its own propellant to circularize its orbit more than 22,000 miles on space. From there, it will become operational.