56° 50.131’ N, 167° 13.632’ W, June 15— The Healy is officially underway! At zero-eight-hundred hours Tuesday morning, line handlers threw off the Healy’s dock lines from giant cleats on the pier and the tugboat James Dunlap nudged the Healy out of Dutch Harbor. Captain William Rall’s departure was very smooth and we’re all becoming accustomed to the ocean now rolling beneath us. “It’s great to be on our primary mission!” the captain reported back to Coast Guard headquarters. 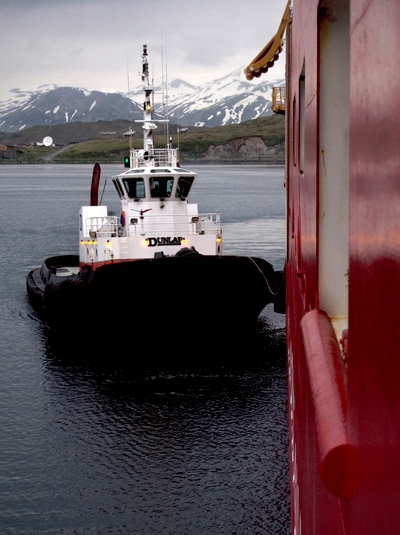 Coast Guard crew members at the fantail, the rounded area at the stern of the ship. (Photo by Haley Smith Kingsland)

The Healy passed The Deadliest Catch fleet on the way out of Dutch Harbor. (Photo by Haley Smith Kingsland.)

We’re heading north to the Bering Strait, planning to reach our first research station on Thursday. You can check out the “Aloft Conn” photographs taken from the Healy every hour.

Tuesday afternoon, the science party mustered for orientation with the Coast Guard. We absorbed the following rules: Take short “sea showers” to conserve water. On the mess deck, throw only wet trash in the “red goat” (garbage disposal), and no hats or open-toed shoes. In the laundry room, clean out the lint traps. Wear a lifejacket while working on the side of the ship. Fill out the online accountability form twice a day. Help yourselves to the candy jars outside the sick bay doors.

Those who had never donned “Gumby Suits” were required to learn how to shimmy into these protective neoprene immersion suits in the event of abandon ship. “It was a really strange feeling,” says Shohei Watanabe, a graduate student at Universite Laval in Canada. “The suit was so warm but so difficult to move around in— even just to move my hands. It was also hard to breathe!” (Photo by Karen Romano Young)

If we ever have to abandon ship, every Coast Guard crew and science party member has a specific raft assignment in a particular location. Here, we practice assembling in the proper places on the Healy’s helipad. (Photo by Haley Smith Kingsland)

Tuesday night, ICESCAPE scientists and Coast Guard marine science technicians gathered to discuss set-up progress and finalize the cruise’s operational plan. They have so many logistics to consider before scientific research on the Healy gets underway.

“Even though we had a number of planning meetings and weekly teleconferences, there are always last minute changes to make,” said chief scientist Kevin Arrigo. “It’s really important to get together as a group and hammer out the last details. Very soon we’ll be in serious science mode!”

6 thoughts on “Logistics at Sea”