68° 18’ 132” N, 166° 58’ 487” W, June 22 — Healy continues to keep the scientists and crew busy with science stations around the clock. The sun appears to rotate around us each 24 hours, dipping near the horizon about 3:00 a.m. This morning a science party went on ice a few miles from the village of Cape Hope. There was an open water lead along the shore where we could see a few venturing out in their boat, and also going onto the ice, although on different floes that would be too shallow for us to get near. We did trade “good morning good morning” greetings on the radio with someone in town.

72° 06’ 2” N, 160° 41’ 8” W, June 26 — A couple days ago Healy was challenged by the ice conditions. About 75 nautical miles northwest of Barrow, and only two miles into the ice edge, we ran into numerous, and sometimes continuous, old rubble piles, which look like boulders lying around on the ice every which way. The rubble is from pressure ridges that form when ice floes get pushed against each other due to wind and currents. There were plenty of both ridges and rubble, and with less than a mile of visibility, it makes for slow going since we cannot pick out the best path in advance. The floe we have spent the last couple days in is a vast floe, miles and miles across, made up of a bunch of smaller flows that mixed up through the long Arctic winter. This resulted in pressure ridges and rubble piles over 30 feet thick, and quite a few areas where two floes got stacked up and are well over 10 feet thick.

Since the floe is so large, there is really nowhere for the ice to go except in our track-line behind us. In pressure ridge and rubble areas, we back and “ram” into the ice, and may only move 30 or 40 yards with each back and “ram.”  The “ram” part of this is not how it sounds. The Healy’s bow is sloped such that we ride up on the ice with the help of momentum, and then our 16,000 ton weight crushes the ice downward and along the sides of the ship. The power we use would propel the ship to at least 16 knots in open water, but in the ice our speed rarely exceeds 6 or 7 knots. The rest of this energy goes into the ship riding up on the ice and crushing it downward.

The officers of the deck, or OODs, assigned to drive in the ice are all smiles when we are challenged with these ice conditions. No other way to describe it than just fun driving a ship into something on purpose!

All photos by Haley Smith Kingsland 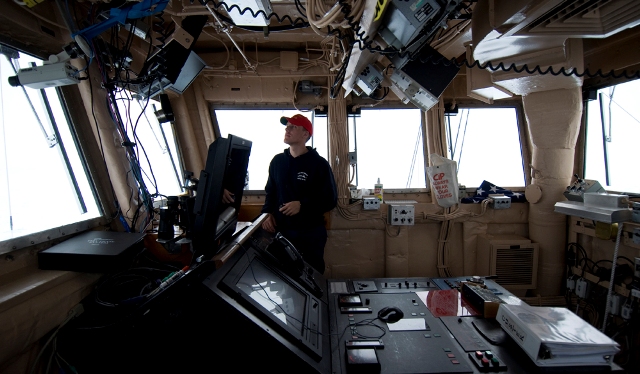 Coast Guard ensign Nicholas Custer, a student engineer, gets ready for a run into the sea ice in Aloft Con, an elevated steering room at the highest point of the ship used only for ice breaking. “We had one run that in 45 seconds went farther than we went yesterday in seven hours!” Nick was proud to say. 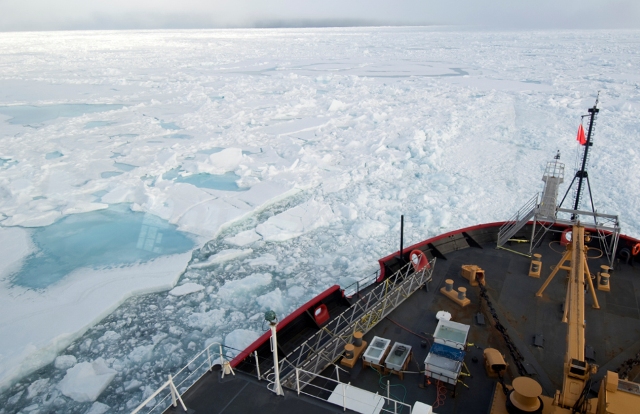 After ramming up onto the sea ice, the Healy slowly backs away. 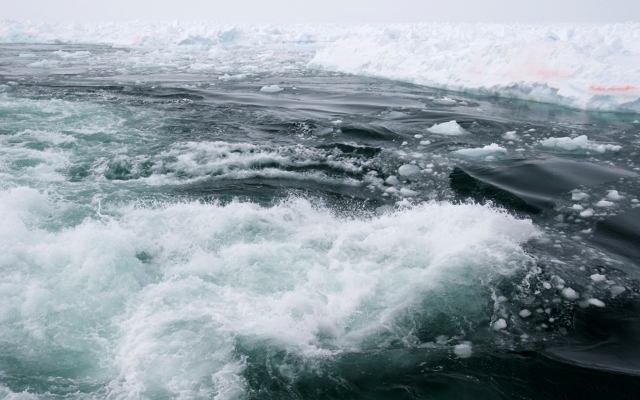 From Aloft Con, Nick propels the Healy forward in order to give the ship momentum for another run. OODs operate the propellers “all ahead” at top speed when going forward into the sea ice. This view of their wake is from the faintail at the stern.

6 thoughts on “How an Icebreaker Breaks Ice”