From space, satellites observe all kinds of aspects of the Earth system. They can track the extent of sea ice, measure sea surface temperature, and even take pictures of the ocean’s microscopic organisms. If that’s the case, why are we at sea on the Healy?

Earths’ systems are exceedingly complex. To improve measurements collected from space, scientists on the Healy will sleuth out complexities right on the scene. For now, however, satellites direct our decisions as to where — and when — we’ll be collecting that data. 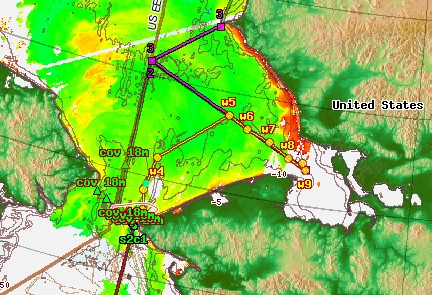 Data from NASA’s Aqua satellite show scientist on board the Healy the location of phytoplankton blooms.

In 2010, ICESCAPE sailed through the Chukchi hotspot, a surprisingly intense phytoplankton bloom in the Bering Strait.

“We measured about 50 micrograms per liter, the highest concentration of chlorophyll that I’ve ever seen anywhere in the world,” said Kevin Arrigo, ICESCAPE chief scientist from Stanford University.

From space, the blooms show up as green swirls on images from the MODIS instrument on NASA’s Aqua satellite. The pictures reveal the location and timing of microscopic organisms afloat in the sea, the base of the food chain and key players in the carbon cycle.

This week, satellites show that the Chukchi hotspot isn’t so hot. By midday on Thursday, June 30, we should be on site to collect a full suite of measurements to find out why. If the bloom previously peaked, we should see remnants at depth.

Scientists on board also want to study how the blanket of sea ice impacts Arctic ecosystems. But where’s the ice?

Today we’re passing through the Bering Strait and stopped for a full suite of measurements near the Diomede Islands. 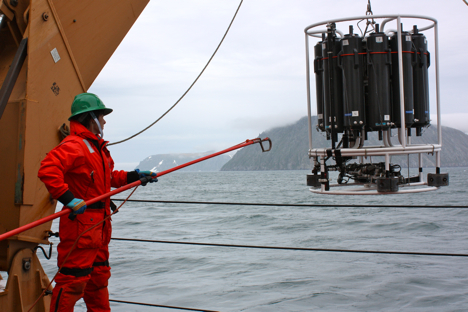 We’ll keep pushing north and should start encountering ice any day now. Some charts show that we could see small ice patches as soon as tomorrow. Any significant ice, however, might not turn up until the end of the week.

We know the whereabouts of sea ice thanks to ice concentration maps from sources such as AMSR-E on NASA’s Aqua satellite. Last year our progress north was blocked by thick, multiyear sea ice pulled south by the Beaufort Gyre. Satellites show that, so far, ice should break up enough so we can get a look at ocean, ice and ecosystem interactions deeper in the Arctic basin. 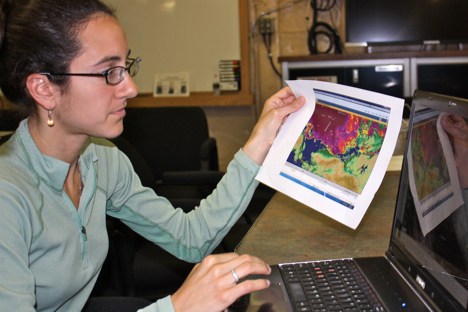 Melinda Webster of the University of Washington looks over a map of satellite-derived Arctic sea ice concentration. Credit: NASA/Kathryn Hansen

“The satellites are guiding us to where we’ll actually do our work and, in some cases, informing us of the state of the system,” said Greg Mitchell of Scripps Institution of Oceanography. “The coolest technology we’re using every day is the technology flying in space. “