This past week, LCROSS and LRO were finally mated together, LCROSS on the bottom, and LRO on top, as I described on my 5/13 post.  On Friday, both spacecraft were encapsulated inside the Atlas V payload fairing, the sleek nosecone of the launch vehicle.  Now that they are inside, they will remain in this cocoon until they are released into space after launch.  Seeing this in photos brought a strange sense of finality to the whole development.  Years of effort, and now the team is done designing, done building, and nearly done testing.  It really comes down to the launch team and the operations team now.  Launch is one month away!

Here’s a photo of LCROSS and LRO, united at last after years of independent development in different facilities – LRO at Goddard Spaceflight Center, Greenbelt, MD, and LCROSS at Northrop Grumman in Lanham, MD and Redondo Beach, CA. 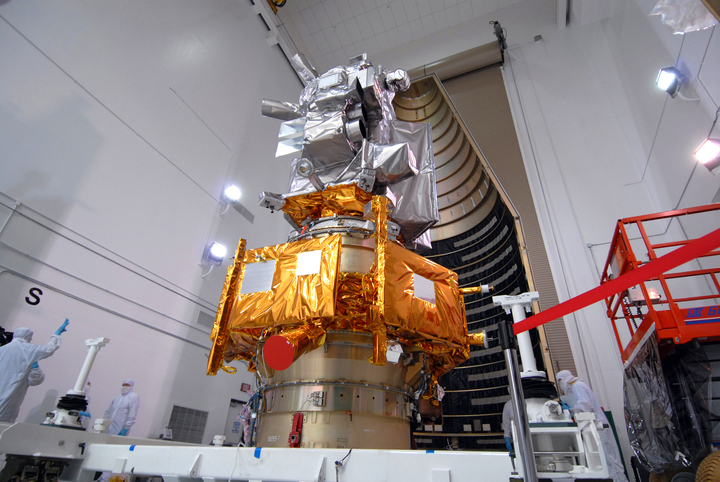 LRO is the silver-colored spacecraft, LCROSS the gold-colored spacecraft.  Having never seen LRO, members of our flight team were stricken by how different the two spacecraft look.  Both are covered in Multi-Layer Insulation (MLI for short) that protects the spacecraft from the harsh thermal environment of space.  But the kinds of materials each spacecraft uses in their MLI are tailored to their respective missions – their orbits, how long they expect to dwell in the shadow of the moon, which sides of the spacecraft will face the sun, the sensitivity of some spacecraft elements to heat and cold, and the amount of heat specific electronics units produce.

Most importantly, the mechanical interface between each vehicle has to be entirely reliable during launch so as not to damage either spacecraft or to amplify vibrations that might endanger the stability of the launch vehicle.  For LCROSS, since we carry the Centaur with us for most of our mission, this connection persists for months beyond liftoff, all the way to 10 hours before lunar impact.

However, each spacecraft must also be able to reliably separate from the rest of the stack.  This is a tricky operation.  On command, the mechanism holding the spacecraft must transform from an ultra-solid connection, to one that releases and pushes the two pieces from each other using strong springs.  The release must avoid snags, and must provide a good push off – just the right amount of speed, as little rotation as possible, and without re-contact!

Aside from the mechanical aspects, there are a number of electrical connections bridging the interfaces.  On the pad, the Centaur acts as a conduit for telemetry data from both spacecraft on the launch pad so that both the LRO and LCROSS teams can monitor spacecraft health immediately prior to launch.  Just after the stack leaves Earth orbit, the Centaur also sends the signal to activate the separation mechanism between LRO and LCROSS.  That means data cabling has to somehow get from LRO to the Centaur, with LCROSS in between.  LRO’s data lines cross the LRO-LCROSS boundary, run down the side of LCROSS, and across the LCROSS-Centaur boundary.  In the meantime, LCROSS launches powered off.  Some time after LRO separates, the Centaur also sends signals commanding LCROSS to wake up, and other signals to notify LCROSS it is time to take control of the Centaur.  All of these electrical connections cross the separation planes between the vehicles.  The connectors must reliably transmit data after the rough ride to orbit, but then disconnect when they’re supposed to at separation.

Here’s a parting shot of LCROSS.  If all goes well, we’ll not see it again.  During the mission, we can only imagine how it appears on its way to the moon.  In October, that spacecraft will have its final, brief hurrah in just 4 minutes of data transfer back to Earth, observing the Centaur impact.  At the end of that 4 minutes, it too will impact, and will become part of the moon. 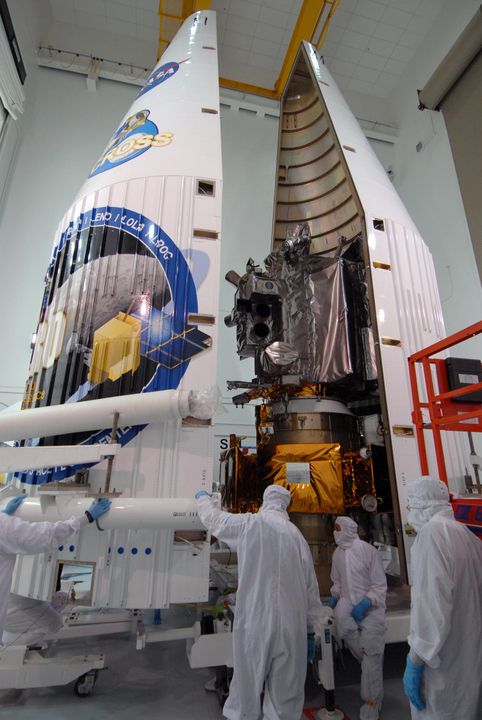 4 thoughts on “Our last view of LCROSS”