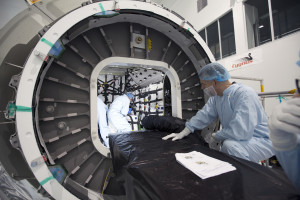 On the OA-5 mission, Cygnus will carry supplies and equipment to the International Space Station, as well as science payloads. The total mass of the cargo is approximately 2,425 kg (5,346 lb.), which includes 56 cargo bags of multiple sizes.

The Saffire-II experiment will start a controlled fire on the Cygnus capsule after it departs the station to observe and measure how the fire behaves in micro-gravity.

“One of the least understood risks in space is how a fire starts, how it propagates, how you will detect the fire and how you put it out,” said Jintendra Joshi, Saffire technology integration lead for the Advanced Exploration Systems Division at NASA Headquarters.

Future experiments will try burning in different conditions, then investigate strategies for putting fires out.

The Cool Flames experiment will investigate why some combustible materials seem to burn at a lower-than-expected temperature in micro-gravity. “In certain cases with certain fuels something unexpected happens that can’t be replicated on the ground,” said Jesse Robins of NASA’s Glenn Research Center.

What you see, he said, is after an initial hot burn the visible flame extinquishes but the fuel droplet size diminishes at a faster rate than evaporation would suggest. Sometimes the fuel can re-ignite, he said, “like a trick birthday candle.”