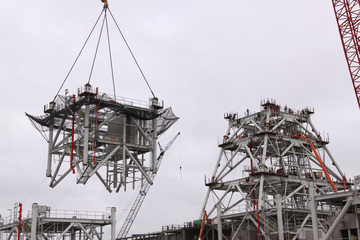 Constellation program managers agreed to reevaluate the proposed Ares I-Y flight test during an Oct. 30 Control Board and plan to take the decision up the ladder to management at NASA Headquarters soon. The decision could result in the removal of the Ares I-Y flight from the manifest in order to better align test flights with evolving program objectives.

As part of the program’s ongoing review of its ground and flight test strategy, managers evaluated the flight test plan and decided that the Ares I-Y flight fell too late in the vehicle development phase to provide useful information and lacks key elements to make it a true validation of the flight vehicle’s systems.

Originally, the I-Y test was defined as an incremental “placeholder” and planned for 2012.  It was to be a suborbital flight to test a five-segment booster, a flight production upper stage — without a J-2X engine — a functional command module and launch abort system and a simulated encapsulated service module.

By fall 2008, program managers were already looking at changing direction for the Ares I-Y test to improve the overall program’s chances of flying a full test vehicle by 2014. Now, with the Constellation Program nearing its preliminary design review and with maturing vehicles and systems, managers agree the I-Y test objectives can be achieved through other tests already in the manifest.

For example, the ascent abort test for Orion’s Launch Abort System can be incorporated into abort tests planned at White Sands Missile Range in 2012 and 2013 and on the first Orion flight in 2014. The ascent test will document the performance of the LAS in the event control of the launch vehicle is lost after first stage separation.

Removing the Ares I-Y flight test eliminates a unique vehicle configuration that must be designed and managed separately from the objective designs of Ares and Orion. It allows the team to focus on achieving a first launch of a thoroughly verified system and represents a tightening of the program as a function of its maturation that will ultimately save money needed for other tests.

“It simply does not fit where we are headed,” said Jeff Hanley, Constellation Program manager and chairman of the Control Board. “The test vehicle was intended to meet evolving needs but the current configuration is too different from what the program requires to certify the Ares/Orion vehicle systems.”

The current Constellation manifest shows the Ares I-Y flight test scheduled in March 2014, just a year out from the proposed first crewed flight Orion 2, planned in 2015.

Managers are also considering other options including a flight test that would fly in 2012 or 2013 that would have revised flight test objectives to better support vehicle development.