Check out the news release:

CAPE CANAVERAL, Fla. — The May 31 transfer of Launch Pad 39B at NASA’s Kennedy Space Center in Florida from the Space Shuttle Program to the Constellation Program is the next step in preparing the first flight test of the agency’s next-generation spacecraft and launch system. The Constellation Program is developing new spacecraft — including the Ares I and Ares V launch vehicles, the Orion crew capsule, and the Altair lunar lander — to carry humans to the International Space Station, the moon and beyond.

Since the late 1960s, pad B has been instrumental in human spaceflight programs, such as Apollo, Skylab and the space shuttle. The pad originally was built for the Saturn V rockets to launch the Apollo capsules to the moon. In July 1975, the pad was modified to support space shuttle operations. The first space shuttle to lift off from pad B was Challenger in January 1986.

The handover took place Sunday after space shuttle Endeavour was moved to Launch Pad 39A. The ground operations team will finish modifying pad B for the Ares I-X rocket launch. Modifications will include removing the orbiter access arm and a section of the gaseous oxygen vent arm and installing access platforms and a vehicle stabilization system. 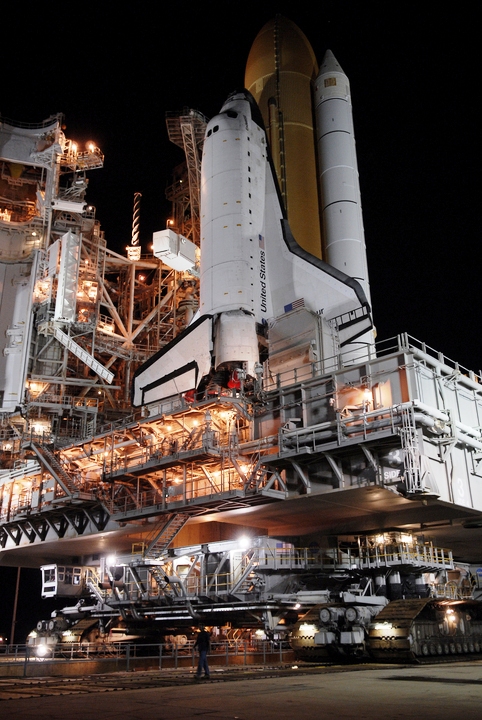 This is a shot of Pad 39B at the Kennedy Space Center, which is being prepared for the Ares I-X test flight later this year. That particular pad — as well as its twin, pad 39A — was the site of space shuttle launches since the 1980s until 39B was retired in 2006 (pad 39A is now the primary site). In this picture, which was taken at dawn, you can see the towers of the new lightning protection system for the pad. Each of the three new lightning towers will be 500–feet tall with an additional 100-foot fiberglass mast on top of them. This work is being done because the Ares and Orion stack will be much taller than the shuttle is, coming in at more than 300-feet tall.