After so many close flybys of Enceladus, we’re starting to feel as if this little moon of Saturn is an old friend. But during the encounter planned for Nov. 2, 2009, we are going to get up-close and personal. Cassini is going to take its deepest dive yet into the plumes spewing out from the moon’s south pole to try to learn more about their composition and density.

The spacecraft is going to approach within about 100 kilometers (62 miles) of the surface. We’ve been closer before (25 kilometers or 15 miles), but we’ve never plunged quite so deeply into the heart of the plume.

To get a better sense of our flyby, watch the animation created by my colleague Brent Buffington. This is the seventh targeted flyby of Enceladus, so we sometimes refer to it as “E7.” The video starts out with our approach to Enceladus, rotating through the various instruments scanning Enceladus for data. Then at around 7:40 a.m. UTC (Coordinated Universal Time), we do our long-anticipated flyby through the plumes. The passage will be quick: traveling at about 8 kilometers per second (about 5 miles per second) – fast enough to go from Los Angeles to New York in less than 9 minutes – we’ll spend only about a minute in the plume. 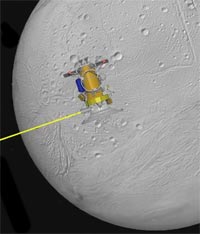 Then, we zoom away from the plumes and Cassini turns on an infrared instrument (red rays in the animation) to take the temperature of the south-pole fissures known as “tiger stripes” where the plumes originate. A few minutes later, Cassini uses an ultraviolet instrument (purple rays in the animation) to measure the plumes against the background of the peach-colored Saturn. The infrared instrument then gets another turn to examine Enceladus. For more details, see the mission description.

The focus of this flyby is to analyze the particles in the plume with instruments that can detect the size, mass, charge, speed and composition. Instead of using its eyes (the cameras), Cassini is going to use its senses of taste and smell. But we’re going to get some pretty good pictures too, including some impressive shots of the plumes from far away.

So far, we have detected water vapor, sodium and organic chemicals such as carbon dioxide in the plumes that spew out from the tiger stripes, but we need more detail. Are there just simple organic molecules, or something more complex? This is the first time we’ve found activity on a moon this small (the width of Arizona, 500 kilometers or 310 miles in diameter). We really want to understand what’s driving the plumes, especially whether there is liquid water underneath the surface. If we can put the pieces together – a liquid ocean under the surface, heat driving the geysers and the organic molecules that are the building blocks of life – Enceladus might turn out to have the conditions that led to the origin of life on an earlier version of Earth.

So if this is all so interesting, why did we wait so long to travel into the plumes? One reason is the plunge is tricky. We wanted to make sure we could do it. We worried that plume particles might damage the spacecraft. We did extensive studies to determine that it was safe at these distances. We also wanted to have the right trajectory so we didn’t use an excessive amount of rocket fuel. We are going very fast through this sparse plume; so to play it safe, we’re using Cassini’s thrusters to keep it stable through this flyby.

We’ll be monitoring the thrusters closely because we don’t want to have to use them on another flyby through the plumes planned for April 28, 2010. In the future flyby, we plan on tracking the spacecraft very closely with the radio instruments on Cassini and on Earth so we can measure how the spacecraft wobbles as it passes near Enceladus. These measurements should tell us more about the interior of the moon, including whether it really does have a liquid subsurface ocean. With the thrusters on, we won’t be able tell if the motion of the spacecraft comes from the gravity of Enceladus or the thrusters. We’d like to know whether we can rely on other kinds of attitude control equipment.

We’re all eager to pore over the results of this flyby. Stay tuned. In the meantime, feast your eyes on this map of the surface of Enceladus that the Cassini imaging team has updated and released today. The tiger stripes are located in the lower middle left and lower middle right of the image.

Phew! We made it through the deepest swoop yet down into the plume of Enceladus, the encounter we call “E7” because it’s the seventh targeted flyby of Enceladus.

But now we have our work cut out for the next few weeks as we pore over the data, painstakingly analyzing every signal to understand the composition of the plume and its structure.

So far, we know the Visual and Infrared Mapping Spectrometer (VIMS) was able to get images and data in a variety of wavelengths of light and saw that the plume extends out to at least 1,000 kilometers (600 miles).

We also have striking images of the moon crowned by its glorious plume, which Cassini captured right before its plunge. The images illustrate well that the spectacular plume spewing from the south polar region is composed of many much smaller jets.

The images and VIMS data both show that as the moon becomes less and less illuminated by the sun (similar to when our moon approaches the phase known as “new moon”), the plume gets much brighter. These data will be valuable for understanding the detailed structure of the plume and where it connects to the surface.

We have also learned that the density of the plume appears to be less than half of that predicted. Still, the heart of the plume measured on this flyby was about three times denser than the sparser parts of the plume we flew through previously.

There is more good news. We will be able to do the Enceladus flyby on April 28, 2010, on the spacecraft’s reaction wheels. This means we will be able to perform the Radio Science Subsystem experiment with Cassini’s main antenna to understand the interior of Enceladus under the hot south polar region.

During this experiment, antennas from the Deep Space Network (DSN) on Earth will be tracking the spacecraft to see how much Enceladus tugs on it.  By measuring this tug, scientists will be able to answer such questions as: How much is the shape of the moon deformed by tidal forces from Saturn?  Is there an unusually dense mass under the south pole? (The higher the mass, the larger the tug?)

We know that heating by tidal forces is what drives the plumes, but we’re not sure exactly how. In addition to a possible liquid subsurface ocean, Enceladus may be harboring a dense mass underneath its surface that helped to start and maintain the moon’s current activity.

Just wanted to share our excitement about the reams of data we’re combing through. Now, back to work!