“Climate change in polar regions is expected to be among the largest and most rapid of any region on Earth.” — Intergovernmental Panel on Climate Change (IPCC), 2001

ICESCAPE’s interdisciplinary and multi-generational team of scientists is working hard to better understand the complicated dynamics of the Arctic Ocean and its response to climate change. In the coming weeks, we’ll feature interviews with each principal investigator about his or her research. Below are a few key scientific concepts you’ll likely encounter in conversations with them.

Industrial behavior such as burning fossil fuels like coal and gasoline releases an enormous amount of carbon dioxide into the atmosphere. Carbon dioxide concentration is now about fifty percent higher than it was before the Industrial Revolution. All of this extra carbon dioxide has trapped more heat in the earth’s atmosphere, and global temperature is expected to increase up to six degrees by the end of this century.

Why worry about a mere six degrees? Well, if the temperature were to drop six degrees, Earth would plummet into an Ice Age. So the current temperature rise could create an entirely new climate unlike anything humans have ever seen. Changes are already rippling across the world, and the Arctic is particularly vulnerable because of the white reflective surface of its sea ice.

In the Arctic, ice forms and melts by seasons. It’s so cold in late fall that the surface ocean freezes, expelling its salt to form sea ice of all different kinds like dark nilas, pancake, and shuga. When the Arctic tilts towards the sun in early spring and summer, some sea ice melts in the extra heat.

Scientists use the term “ice-albedo feedback” to describe a phenomenon responsible for amplifying Arctic sea ice decline. Think of albedo as the amount of light reflected off a surface: a white surface like Arctic sea ice reflects lots of light (it has a high albedo), while a black surface like the ocean reflects little light (it has a low albedo). Now that the bright Arctic ice is disappearing in large part because of melting due to global warming, a greater area of the dark ocean is absorbing more sunlight, thus heating the poles even more and making ice formation more difficult. As ICESCAPE co-chief scientist Don Perovich explained in a 2005 New Yorker article, “Not only is the albedo of the snow-covered ice high; it’s the highest of anything we find on Earth. And not only is the albedo of water low; it’s pretty much as low as anything you can find on Earth. So what you’re doing is you’re replacing the best reflector with the worst reflector.”

“Today, Arctic sea ice is melting 28 days earlier and forming 17 days later than usual, meaning that the Arctic melt season has increased more than 45 days,” says ICESCAPE chief scientist Kevin Arrigo. In late May 2010, less ice covered the Arctic than in 2007, the year known for having the least amount of sea ice since records began in 1979. Don Perovich likens the current amount of Arctic sea ice loss to an area nearly half the size of the continental United States.

Sea ice and biology are intricately intertwined. Polar bears have lost valuable time to hunt ringed and bearded seals that live on the sea ice, and walruses’ sea ice habitat is shrinking. But how has reduced sea ice cover affected tiny, microscopic organisms like phytoplankton? 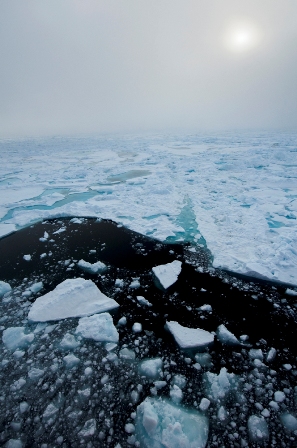 Phytoplankton are one-celled algae that float at the surface ocean. Even though they live for just a few days, they’re the base of the Arctic food web. Tiny shrimp-like animals called copepods feed on them as do whales, seabirds, and fish. All of the energy that fuels the Arctic food web ultimately derives from phytoplankton.

How will reduced Arctic sea ice cover affect primary production? Scientists think phytoplankton will thrive in larger expanses of open ocean with more access to sunlight. These new periods of high phytoplankton growth, or “blooms,” will thus increase the productivity of the Arctic Ocean. Connecting phytoplankton to climate change, the flux of carbon dioxide from the atmosphere into the Arctic Ocean has tripled over the last three decades, and scientists are working to discover where that extra carbon has gone and how phytoplankton may be using it.

ICESCAPE in the Arctic

As you will see through interviews with ICESCAPE scientists in the coming weeks, our team spans a wide breadth of expertise. Some researchers are characterizing phytoplankton communities and primary production, some are taking measurements that will allow them to calculate carbon dioxide concentrations in the surface ocean, and some are investigating sea ice ecology. Others are observing the export of particles from the surface ocean to the bottom, and yet others are taking optical measurements that will improve satellite data. Daily interactions aboard the Healy between sea ice researchers, nutrient analyzers, biological and chemical oceanographers, plankton ecologists, optics specialists, and carbon cycle experts are helping the Arctic scientific community develop a more holistic, interdisciplinary approach to understanding this rich ecosystem.

This image of Alaska and its ocean environs from June 24 combines data from different satellites. Brown is land, gray represents Arctic sea ice, while the colored areas represent different levels of chlorophyll. Chlorophyll a, the green pigment that aids photosynthesis, is an indicator of the amount of phytoplankton in the ocean. In this image, red illustrates areas of high chlorophyll concentration, where there’s a lot of phytoplankton and hence a lot of primary productivity. (Created by Gert van Dijken, a science and engineering associate at Stanford University)

2 thoughts on “Why We Are in the Arctic”