60° 43.118’ N, 168° 28.473’ W, June 16 — The captain brought the Healy to a halt and the ship rocked back and forth in stationary position as ICESCAPE scientists and Coast Guard marine science technicians rallied to deploy their equipment. Oceanographers work on “stations,” or fixed points at sea, to make accurate measurements. Over the next 35 days, ICESCAPE scientists have designated about 136 open water stations and 10 days of ice stations.

But because we must first rehearse what will become routine for us, Wednesday afternoon was a “shakedown station” to ensure that our instruments function properly and our operations are efficient. We planned a “full station,” meaning that we deployed all scientific equipment. Jim Swift of the Scripps Institute of Oceanography likened the practice to the frenzy of a Chinese fire drill, while co-chief scientist Don Perovich compared its importance to readying football players for the Super Bowl.

He summed up the process nicely:

“It’s ‘AOP walk, PRR bow, IOP stern, CTD star-full water, GRAB back, PUMP star, no ASB, drop ICE on two.’ Got all that? Like a lot of things, it’s less complicated than it seems. It just means that we will mount some light sensors on the bow walkway and then deploy some other light sensors off a hand line from the bow. Then move to the stern of the ship and lower into the ocean more optical sensors using the winch on the stern, and then from the starboard winch lower a device that measures the temperature and salinity of the ocean and takes water samples. When that is done, drop a shovel-like piece of equipment to the bottom and grab some seafloor sediment. Then lower a pump to near the bottom that circulates water through a filter. Oh yes, ‘no ASB’ means we will not launch the Arctic survey boat and ‘drop ICE’ means we will not be sending a team onto the ice. This is a good thing, since there is no ice. ‘On two’ means we start at 2 PM.”

How does all this equipment work? Read the captions below to find out! 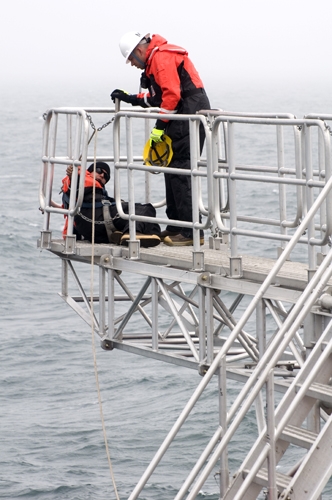 “We’re hunting photons!” exclaimed Greg Mitchell of the Scripps Institute of Oceanography. A light sensor deployed from the Healy’s bow walkway measures how seawater impurities affect light changes at ocean depths. This is the first time the bow walkway has been set up on the Healy since 2000. (Photo by Haley Smith Kingsland) 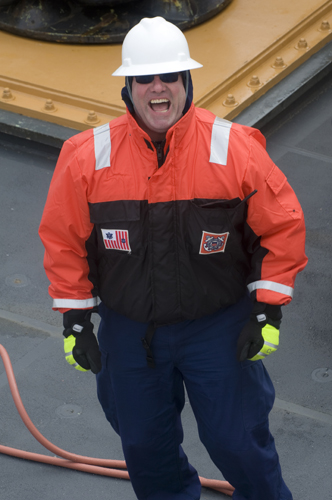 Coast Guard Marine Science Technician Chief Kurt Stewart works with a crew of six other marine science technicians, and ICESCAPE is his first full mission on the Healy. So how did the shakedown station go for him? “I thought it was fun. But it would have been nice if it had been warmer— like off the coast of Hawaii warmer.” (Photo by Haley Smith Kingsland)

Little fins make the PRR, or Profiling Reflectance Radiometer, fall vertically in the ocean. This instrument measures how much light the ocean surface reflects out to space.  Greg Mitchell explained that satellites observe the color of light reflected from the ocean— which depends on the amount of algae and other things in the water— and such information is used to make maps of ocean biology. He said that fieldwork like NASA’s ICESCAPE cruise is crucial because scientists can use the detailed measurements taken at each station to make oceanographic mapping even better. Here, graduate student Brian Seegers of the Scripps Institute of Oceanography lowers the PRR into the water. (Photo by Haley Smith Kingsland)

This optical package deployed from the A-frame at the Healy’s stern measures light absorption and scattering by diverse things from water molecules to algae and bacteria cells. The IOP frame carries a few pieces of optical equipment from different research groups, including a laser scattering device and Fast Repetition Rate Fluorometer (FRRF) to measure photosynthesis. (Photo by Haley Smith Kingsland)

The A-frame, scientists, and MSTs bring the optical package back to the Healy’s fantail. (Photo by Haley Smith Kingsland)

The CTD rosette lives in a special room on the starboard side of the Healy. It’s really just an aluminum frame that carries water sampling bottles all around its circumference, with different sensors attached to its bottom that record characteristics like temperature and depth. “The CTD is the primary electronic instrument for measuring the physical properties of the water column,” says Jim Swift.

A CTD operator lowers the rosette and closes the bottles to sample water at different depths. Beforehand, scientists request how much water they want for their experiments and Jim keeps track of the numbers in a chart to ensure that the rosette samples enough. He also enforces the scientists’ sampling order when the rosette returns.

Deployed from the stern A-frame, the stainless steel jaws of the Van Veen Grab grasp and trap soft bottom sediments. Technicians and scientists have to take care when raising the Van Veen Grab back on deck, because its choppers could snag somebody! Once on deck, technicians pop open a trap door at the top of the Van Veen Grab and deposit the sediments in a bucket from which scientists take a small sample to measure sediment chlorophyll concentrations. “I saw an amphipod in the mud that looks like a tiny shrimp— it’s what gray whales eat as bottom feeders,” said Karen Frey of Clark University. Here, the Van Veen Grab comes back aboard. (Photo by Haley Smith Kingsland)

The thorium pump was the shakedown station’s final deployment. “It was so light that it flew through the water like a kite,” said chief scientist Kevin Arrigo, so next time it probably needs a weight tied to it. The pump measures how many particles rain down from the ocean surface to the bottom. (Photo by Haley Smith Kingsland)

The full shakedown station elapsed about three hours, and as you can see, working on station requires an enormous amount of coordination and teamwork. Greg Mitchell stressed the significance of ICESCAPE’s interdisciplinary framework that has brought together so many scientists from several institutions. “We’re all measuring different parts of the puzzle to get the best understanding of the ecosystem so we can improve our models and get the best predictions for the future.”

Captain William Rall is also happy with the cooperation among all aboard. “Looking across the mess deck during chow and seeing the colorfully dressed science party mixed in and eating with the Coasties all dressed in blue brings me a smile,” he wrote in his log. “It’s cooling off fast as we head north to collect water samples, bottom samples, and support a multitude of optical devices. Can’t wait to get to some ice!”

Dutch Harbor, Unalaska, June 14 — On Sunday morning, ICESCAPE scientists awoke halfway across the Aleutians in the town of Unalaska. “I went outside, looked up, and saw something that just didn’t register,” says co-chief scientist Don Perovich, of the U.S. Army Cold Regions Research and Engineering Laboratory in New Hampshire. What he thought were crows were actually bald eagles swooping above him, cleaning fishermen’s nets.

“I’ve never seen anything like it,” Don muses. “Back home, if an eagle’s around it’s a big deal, but here there were 30 or 40 of them just flying around us.”

Many ICESCAPE scientists marveled at the bald eagles as they waited to board the Healy, docked in Unalaska’s international port, Dutch Harbor. Maybe you’ve heard of Dutch Harbor, made famous by the Discovery Channel’s Deadliest Catch. Here more than 350 fishing vessels haul in the greatest amount of fish of any port in the nation, bringing back crab, halibut, salmon, and rockfish from the Bering Sea. 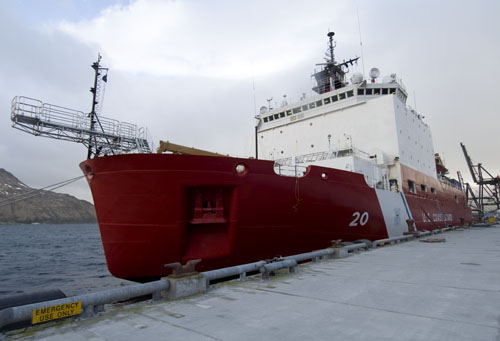 Known as “the Cadillac of the Coast Guard” for its comfortable accommodations, the icebreaker Healy will be our home for the next five weeks. (Photo by Haley Smith Kingsland)

Perhaps you’ve seen images of Unalaska’s Holy Ascension Russian Orthodox Cathedral — a remnant from Alaska’s early explorers — or know of Fort Schwatka, constructed to protect Unalaska from Japanese attacks in World War II. ICESCAPE scientists explored the town Sunday morning, stocked up on snacks, batteries, and extra layers at local supply stores, and some even hiked Bunker Hill for a panoramic view. Treeless, snowcapped mountains extend into the ocean and the sun shines until 11:30 p.m. 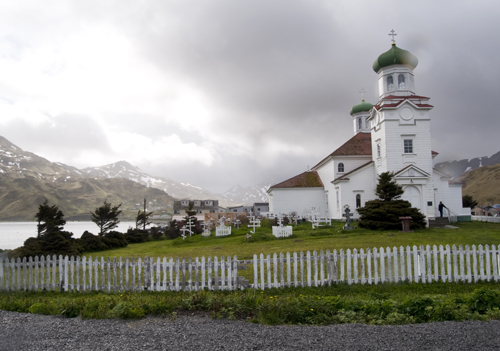 A community member rests outside the Holy Ascension Russian Orthodox Cathedral after Sunday Mass. The cathedral was built between 1894-1896 and is listed on the National Register of Historic Places. (Photo by Haley Smith Kingsland)

The science party moved aboard the Healy Sunday afternoon and spent Monday unpacking and setting up their gear, much of which was shipped from their research institutions long ago. Life aboard is bustling as they configure all kinds of equipment like spectrophotometers, the Imaging FlowCytoBot, and the automated UV oxygen titrator in the Healy’s science labs. In spare moments they move into three-person staterooms with many spacious compartments, configure ship e-mail, and learn how to use the pagers the Coast Guard issued to each person. We all have unique numbers to get in touch quickly on this 420-foot ship! 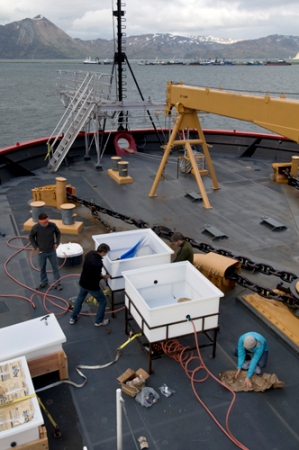 On the foredeck of the Healy, chief scientist Kevin Arrigo’s research team assembles incubators to do experiments with phytoplankton. (Photo by Haley Smith Kingsland)

The Healy leaves port at 8 a.m. Tuesday morning for 37 days at sea. You can learn more about Dutch Harbor and the history of the Aleutians at www.unalaska.info. 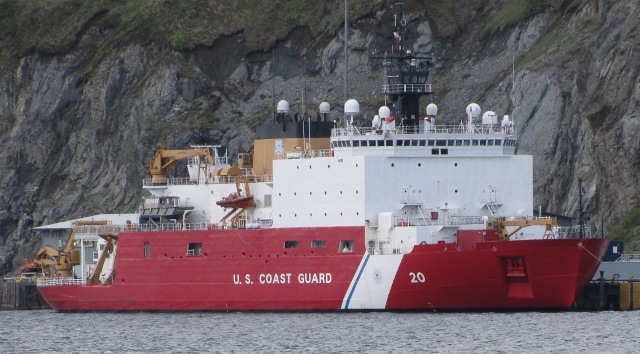 Dutch Harbor, Alaska, June 13 – The scientific teams that will be heading to the Arctic on NASA’s first scientific ocean voyage moved their gear and themselves onto the U.S. Coast Guard’s icebreaker Healy. Tonight will be the first of many nights on the Healy for the ICESCAPE crew as they prepare for the five-week voyage.

This afternoon after receiving berth assignments and a safety briefing, the scientists and technicians discussed the immediate work ahead: setting up instruments, equipment and laboratory space. There will be a whirlwind of activity on the Healy all day Monday to get everything in place and in working order. The ship is scheduled to leave Dutch Harbor early Tuesday morning.

ICESCAPE is a multi-year project sponsored by NASA to determine the impact of climate change upon the health of the Arctic Ocean. Many of you are probably familiar with the story of the polar bears’ loss of habitat due to earlier, longer melt seasons and declining sea ice. But decreasing sea ice is expected to affect more than charismatic marine mammals. How will tiny organisms such as sea ice algae respond to the changing Arctic climate? How will global warming impact the Arctic’s food web dynamics and carbon cycle? How will new atmospheric interactions between molecules, aerosols, and clouds affect chlorophyll concentration?

On June 15, the USCGC Healy (photo above) will depart Dutch Harbor, Alaska, for its passage north through the Bering Strait to the Chukchi and Beaufort Seas. Along the way, forty-three members of the science team will sample 50-100 stations and even disembark for extended periods to work on the sea ice. They’ll study everything from the Arctic Ocean’s optical properties to phytoplankton physiology.

The 420-foot-long icebreaker Healy can plow through 4.5 feet of sea ice continuously. Manned by an 85-person Coast Guard crew, the ship is equipped with six science labs, a polar library, and two HH-65 helicopter hangars. At the end of the first expedition on July 21, the Healy will steam back into port in Seward, Alaska. Coupled with satellite data and numerical models, the Healy’s field observations will allow scientists to make connections between the atmosphere, ocean, and sea ice in order to broaden our understanding of Arctic Ocean ecosystems.

According to ICESCAPE’s chief scientist Kevin Arrigo, “NASA has assembled an excellent team of researchers for ICESCAPE and I am very excited to be part of this unique opportunity to learn more about the changes taking place in this fascinating but vastly understudied environment.”

On this blog we’ll post regular updates from the science teams, and you’ll hear from a wide range of people involved in ICESCAPE. We hope you’ll enjoy the voyage with us!

Learn more at both the ICESCAPE and Healy websites.